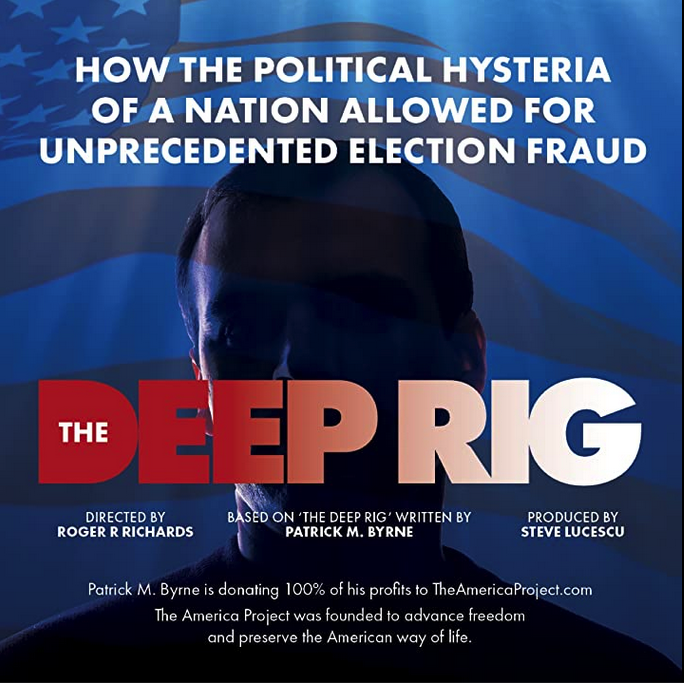 Watch 'The Deep Rig' for FREE!


You have until 8PM Eastern on Sunday to watch this film, written and produced by Libertarian, entrepreneur, Founder/Ex-CEO of Overstock.com and Founder of the America Project, Patrick Byrne and starring Lt Gen Michael Flynn, Donald Trump, Bernie Sanders, Bobby Piton and Phil Waldron and more.

Byrne is a libertarian who did not vote for Trump and has publicly criticized him: that said, he believes Election 2020 was rigged, and that should be objectionable to every person who believes, "just government derives its power from the consent of the governed." In this book he explains what caused him in August 2020 to study election fraud, and what really happened during the 2020 election. He describes how his team of "cyber-ninjas" unraveled it while they worked against the clock of Constitutional processes, all against the background of being a lifetime entrepreneur trying to interact with Washington, DC.

Follow the team of Patriots, Lawyers and 'White Hat' Hackers, determined to reveal the facts behind the headlines, to backroom scenes and through electronic networks designed to rig any election they conduct.

Scrutinize for yourself the evidence which paints a portrait of Washington's double-dealings and international intrigue.

Source: Ben Wetmore
Organizers scrambling, lost all sign-up data when Big Tech deleted attendee info!
In a continuing war against conservatives in the wake of the 2020 election, corporate ticket and event planner Eventbrite this past week deleted a conservative movie screening of Patrick Byrne’s “Deep Rig” movie in Michigan. This documentary alleges to be further proof of voter fraud in the highly contested 2020 Presidential election. 150 tickets were cancelled, refunded without notice, and all account information deleted.
CONSERVATIVE SPEECH SUPPRESSED AGAIN
On their website Eventbrite claims to have hosted 4.6 million events in 180 countries, with 231 million tickets.
One of the organizers described the frustration, “They just cancelled us out of the blue, and all the contact info for people who signed up is gone. All the revenue is gone. We relied on this American company to serve American people talking about political issues without this kind of discrimination. It’s obscene!”
TRENDING: Heartbreaking Interview with Father of Jake Lang: He Saved Trump Supporter Philip Anderson’s Life on Jan. 6 from Capitol Police — Now He’s a Political Prisoner in Washington DC The movie that corporate giant Eventbrite labelled ‘misinformation’ is a documentary by MyPillow owner Mike Lindell, “Deep Rig”, which claims to show evidence of election interference and systemic voter fraud.

One attendee who had their ticket cancelled, but who asked to be anonymous, said “My wife and I wanted to see the evidence and decide for ourselves, since we keep being told there is none, nada, zero evidence of voter fraud in the 2020 election. Clearly someone has a lot to hide, and corporate America is in on it!”
MEDIA DEMANDS EVIDENCE OF VOTER FRAUD, BIG TECH BUSY COVERING IT UP
Big Tech has been engaged in the total de-platforming of conservatives. Eventbrite deplatformed ACT for America in 2019. And also tried to ban Trump rallies last November. Many other Big Tech companies have been busy silencing conservatives for their political speech while often taking a lax attitude towards explicit criminality on their systems, such as human trafficking. Facebook, Instagram, Twitter, Microsoft, Amazon, have all been caught cooperating with and enabling trafficking criminals while also systemically suppressing conservatives.
“How much further along will we get with this systemic corporate discrimination before grocery chains refuse to allow conservatives to buy food, or your political opinions disqualify you from gas at gas stations, cell phone coverage, or medical care? Left wing corporate overlords have no shame and no dignity. We have to fight back,” said Rosanne Ponkowski, Chairwoman of the Michigan Conservative Coalition.
LEFT WING EXTREMISTS IN BIG TECH BAN CONSERVATIVES FROM MEETING, WHAT BANS ARE NEXT?
Eventbrite was asked for comment and has refused to respond. If they do, their response will be included.