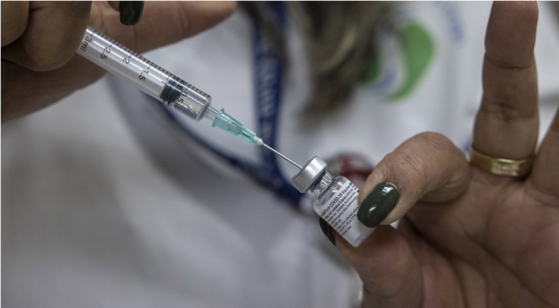 Source: Jeff Charles
The hysteria over COVID-19 and the vaccine has now manifested in a Cincinnati court where a judge made a rather disturbing ruling.
The judge in question threatened a man with prison time by making vaccination a condition of his parole. Last week, Brandon Rutherford told WBNS that as he awaited sentencing, Judge Christopher Wagner asked him various questions, one of which had to do with the immunization.
Rutherford explained that the judge asked if he was vaccinated. He said:

The young man stated that Wagner instructed him to get the shot within two months as a condition of his parole. Rutherford and his attorney, Carl Lewis, were taken aback. The young man said:

I don’t plan on getting it. I don’t want it. So, for him to tell me that I have to get it in order for me to not violate my probation, it’s crazy because I’m just trying to do what I can to get off this as quickly as possible, finding a job and everything else. But that little thing can set me back.

Lewis, who was present when the judge gave the order said “I don’t think the judge is within their powers to do that” and that it was the first time he has heard of a Hamilton County judge giving these types of rulings.
He continued, stating that if the judge thinks he has the authority to require a vaccine as part of parole, “then we’ll have a legal issue to address.”
In a written statement given to CNN, Wagner defended his decision, stating that it was designed to “rehabilitate the defendant and protect the community.”
The judge argued that Rutherford had been “in possession of fentanyl, which is deadlier than the vaccine and COVID-19,” and noted that he “expressed no objection” to the ruling during the proceedings. He also insisted that it is not uncommon for a judge to give orders to safeguard a defendant’s health. Lewis stated that they will wait until the two months pass to see how Wagner responds before asking for a hearing.
This is where we’re at folks. A judge has threatened to have a young man thrown into a cage if he doesn’t let a medical professional stick him with the needle.
While it does not seem likely that such an order could stand up to legal scrutiny, the fact that a judge would possess the chutzpah to even attempt such an action should be alarming to anyone who is already suspicious of the massive government overreach that is being promoted by the left. With the Democrats pushing hard to impose mandatory vaccines and mask-wearing, it can be no wonder that a judge would be emboldened to give such a ridiculous and yes, tyrannical, order.
It is also possible that the judge knows his order won’t stand but was trying to scare Rutherford into getting immunized. Perhaps he believed the threat of jail time would be sufficient enough motivation to push him to action. This might be the reason why the defendant’s attorney is waiting to see if the judge will follow through on his threat. Either way, the notion that someone in his position would coerce someone to inject a substance into their body by threatening imprisonment is abhorrent. Perhaps it is the judge who deserves some type of punishment.