OUT OF MIND » BREAKING NEWS & HOT TOPICS » THE GREAT DIE OFF » Marines Rebuke Defense Secretary: “No Mandatory Vaccinations for My Marines.”

Marines Rebuke Defense Secretary: “No Mandatory Vaccinations for My Marines.”

[ALERT: THIS IS SATIRE, SEE COMMENTS]
Marine Corps General David H. Berger on Monday rebuked Defense Secretary Lloyd Austin’s edict requiring all Armed Forces personnel to submit to Covid-19 vaccinations under threat of court martial or discharge, said a source in Gen. Berger’s office who overheard a heated conversation between them.
Gen. Berger telephoned the defense secretary minutes after he said in a press conference that the Covid-19 vaccination is needed to maintain military readiness and that he would enforce the mandatary vaccination policy regardless of FDA approval status.
“There will be no mandatory vaccinations for my Marines,” Gen. Berger said.
In a transcript of the call reviewed by Real Raw News, Gen. Berger lambasted Austin and branded him a traitor.
“Under no circumstances will Marines be compelled to take a potentially hazardous vaccination that the FDA won’t even fully endorse,” Gen. Berger told Austin. “You are a coward and a traitor, manipulated by people pushing bad policy on the men and women who provide security to our nation. Neither you nor your puppet president has authority to enforce such a policy.”
[…]
Gen. Berger said it was unfair to compare established vaccinations with a product that was rushed to market with little concern for side effects. He called the CDC and Dr. Fauci corrupt, and he asked Austin why the puppet administration hid from the public an NIH report linking the vaccination to thousands of fatalities.
“If someone dies, you say it was Covid-19. There’s a refusal to admit the vaccination carries side effects that can include death in certain individuals.”
[…]
Gen. Berger said he had the support of other Joint Chiefs of Staff and would implore them to ignore unlawful orders coming from the illegitimate administration.
“If a soldier wants the vaccination, fine. If not, he’s not rolling up his sleeve. If you try to forcibly vaccinate even one of my Marines, you better come armed,” Gen. Berger said, and hung up the phone.
In a statement Monday afternoon, Biden said he strongly supports Austin’s message and that he is “eager to see” the Covid-19 vaccination added to the battery of vaccinations soldiers receive upon joining the military.
[…]
Via https://realrawnews.com/2021/08/marines-rebuke-def-sec-no-mandatory-vaccinations-for-my-marines/

The US military is ready to begin enforcing a coronavirus vaccine mandate across all branches, the Associated Press is reporting Monday based on a Pentagon memo it's obtained. The memo is expected to go out on Monday and is intended to "warn" troops to "prepare" for the new requirement.
It will require service members to get the jab by a Sept. 15 deadline, a date which could actually be pushed up if the FDA gives final approval for the Pfizer vaccine or if infection rates rise rapidly. Here's what's in the memo, according to AP:

"I will seek the president’s approval to make the vaccines mandatory no later than mid-September, or immediately upon" licensure by the Food and Drug Administration "whichever comes first," Defense Secretary Lloyd Austin says in the memo to troops, warning them to prepare for the requirement. "I will not hesitate to act sooner or recommend a different course to the President if l feel the need to do so." 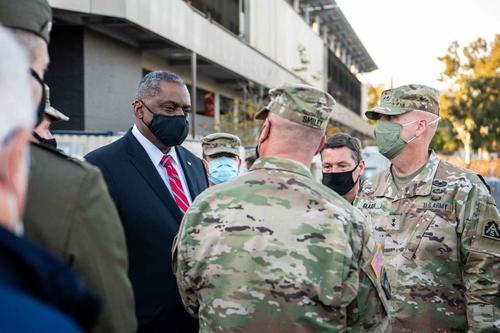 Secretary of Defense Lloyd Austin, DOD/Air Force image
Biden is expected to give the greenlight, given other recent federal mandates for civilian workers. The memo also serves to give military commands a heads up in terms of putting in place proper logistics and assessing what's needed to implement the new plan on large scale.
Prior reports have strongly suggested there's a large segment of the US armed forces which remain 'vaccine skeptical' and hesitant, for example this report from just last week:

A New York state military law attorney said he is receiving calls from Airmen serving at Wright-Patterson Air Force Base — and from active-duty service members across the country — asking about options should the Department of Defense mandate that military members take the COVID vaccine.
...Some service members "are scared and skeptical, basically, to take the vaccine when it’s an experimental vaccine," he said. "That’s really what we’re seeing."
He said his firm is getting "multiple calls" from service members interested in litigation or class-action lawsuits.

While currently service members are given as many as a dozen or up to 17 different vaccines - most often upon entry into boot camp (and based on deployment status and what their military job is) - it remains that the COVID vaccine is still a non-FDA approved "emergency-use basis" shot.
Further it remains that throughout the entirety of the pandemic deaths among US military personnel have remained very low compared to the broader population. This is likely due to military personnel tending to be a healthier, fitter, and younger demographic. Some have argued this fact alone should make a vaccine mandate unnecessary.
Legal pushback against a Pentagon-ordered services wide mandate could hinge on whether FDA approval finally comes ahead of the Sept. 15 requirement. If FDA full approval isn't there by then, it will no doubt trigger legal controversy akin to the anthrax vaccine mandate for select personnel (usually infantry and forward operating forces) in the 1990's.

"Up until the point the vaccine is … FDA-approved, military members can’t be mandated to take the vaccine, unless the president of the United States would waive that requirement," he [attorney and military law specialist Greg Rinckey] said. "It’s very similar to what we kind of saw with the anthrax vaccine back in the ‘90s."
In 2003, a federal judge sided with service members who sued, maintaining that the military could not administer a vaccine that has not been fully licensed without their consent. That program was stopped, the Associated Press reported recently.

This comes on the heels of federal workers, with the exception of the Post Office, being ordered to get the vaccine.
Very likely we'll see instances of refusals to get the jab among military ranks, perhaps leading to mass resignations or punitive measures taken against them. While the Pentagon will mandate the jab, it's as yet unclear what the "or else" in terms of dealing with those who resist the mandate will be. Officials have hinted it could be punishable under the Uniform Code of Military Justice (UCMJ) as a refusal to obey lawful orders.

OUT OF MIND » BREAKING NEWS & HOT TOPICS » THE GREAT DIE OFF » Marines Rebuke Defense Secretary: “No Mandatory Vaccinations for My Marines.”

» “The Guy That Runs That Outfit Over There” – Joe Biden Forgets the Name of the Pentagon and Name of His Secretary of Defense
» How to Avoid ‘Mandatory’ Vaccinations Through Exemption
» NEVER FORGET: 21 years ago Defense Secretary Donald Rumsfeld announced $2.3 TRILLION dollars had gone missing
» No Government should ever have the power to make vaccinations mandatory
» Colorado Adopts Mandatory Vaccinations for Children