Source: Julian Conradson
Some Border Patrol agents who are stuck handling the Biden regime’s borderless nightmare are now speaking out about what’s really happening at the extremely overcrowded facilities that house illegals as they await their release – and their eventual free ride – into the interior of the United States.
Townhall’s Julio Rosas, who has been providing amazing coverage from the ground on the border, was provided with pictures and video that were recently taken by agents in the Rio Grande Valley sector.
In the video, the camera approaches the window of a holding cell. Inside, you can see what looks like over a hundred illegals packed into the small room.
There are so many people piled on top of each other that not a single part of the floor is visible underneath, there isn’t even space to walk through and many are mask-less.

Video of an overcrowded Border Patrol facility in the Rio Grande Valley Sector from this week. From the source: "This has surpassed the point of sustainability — this is lunacy." Fed-up BP agents are taking videos/pics to show what's really happening --> https://townhall.com/tipsheet/juliorosas/2021/08/11/border-agents-take-pictures-overcrowded-facilities-n2593903 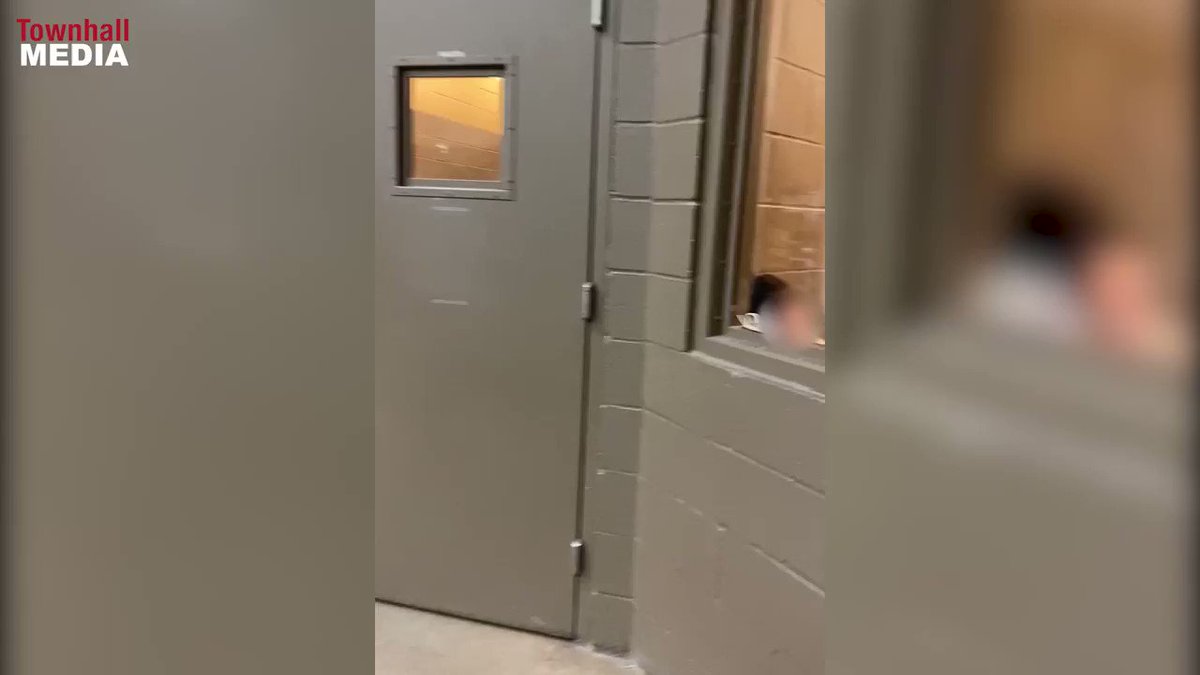 Trump even put out an official statement about the “lunacy.”
Keep in mind that the “kids in cages” narrative he was hammered for has been made incalculably worse by Biden.

The agent that provided the video explained the “nightmare” situation to townhall:

“They are way past capacity – so aliens sit outside because where do you take them? Logistically it’s a nightmare – people want to go to the bathroom, need to eat, women need to breastfeed, and the list goes on…This has surpassed the point of sustainability – this is lunacy.”

One of the sources also provided a picture that shows migrants in what looks like a parking garage being held behind a chain-link fence. It has a similar look to the cell, with people laying all across the floor with little room to walk and, if they are indeed outside in a parking garage, the temperatures regularly reach  100+ degrees.

When AOC show up with her white dress for a photo op? I wouldn’t hold your breath.
After the agents came forward, the former Acting Commissioner of U.S. Customs and Border Protection, Mark Morgan explained to Townhall that borderless-Joe has been lying to the American public since the beginning.

“Look at the damn pictures…Border Patrol is getting fed up and [agents] are sending out pictures,” to show what is really happening.
“Early on when they were saying, ‘Hey, nothing to see here, everything is under control,’ they were talking about unaccompanied minors. They left out what was happening with single adults and families, conveniently, and I believe, again, they were doing that intentionally to misdirect and lie to the American people,”

He also explained how the Rio Grande Sector experienced a massive wave of incomers last week that left them completely overwhelmed and unable to process the vast majority of them.

“Last week,(at the Rio Grande Sector) they had 10,000! 10,000! And 8,000 were unprocessed, leading to overcrowding which violates almost every single CDC guidance to mitigate the spread of COVID-19.”

The capacity for migrants at RGV is only 600.
Instead of sending these migrants back to their home countries like Trump did under Title 42, the overcrowded facilities have just been releasing more illegals into cities along the border so they can process more who are coming in behind them.
The ‘mass releases’ that Biden has authorized are happening at the same time he, and other power-hungry authoritarian democrats, are pushing for renewed lockdowns and vaccine mandates. They are clearly unconcerned about the new delta variant and are just using it as a control mechanism.
Due to recent reporting on the issue, some illegals have started getting tested for the virus when they are picked up by border agents, but many of them are still sliding by untested. Even the ones who have tested positive still get released anyways. In fact, 40% of the illegals that have been dropped off in Laredo tested positive for Covid-19.

In other words, Biden and his goons will rob you of your liberty and freedoms under the guise of protection from a virus while they simultaneously drive busloads of ‘super spreaders’ into US cities and fly them all across the country.

» Leaked Video Showing Border Patrol Agents Are 100 Percent Fed Up!
» ICE asks for volunteers to send to the border as soon as this weekend and south Texas migrant complex is SEVEN times over capacity: Biden downplays influx and claims it's not a crisis
» Here we go... Hundreds of Migrants Try To Storm US Border In California, Border Patrol Fire Pepper Spray Bullets
» Texas Governor Orders Investigation Into Joe Biden’s Filthy, Unsanitary Holding Camp for Migrant Minors After Massive Covid Outbreak
» Actual Job Posting: The Biden-Harris Regime Is Seeking IRS Agents Who Are “Willing to Use Deadly Force