‘The Need to Grow’ Filmmaker Tells RFK, Jr.: Industrial Ag Is Killing Our Soil — Regenerative Farming Is the Answer ‘The Need to Grow’ Filmmaker Tells RFK, Jr.: Industrial Ag Is Killing Our Soil — Regenerative Farming Is the Answer

Rob Herring, producer of the film, “The Need to Grow,” told RFK, Jr. on the “RFK Jr. The Defender Podcast,” healthy soil has a “cosmic galactic level of microbial activity happening right under our noses.”
by Children’s Health Defense Team, The Defender
August 10, 2021 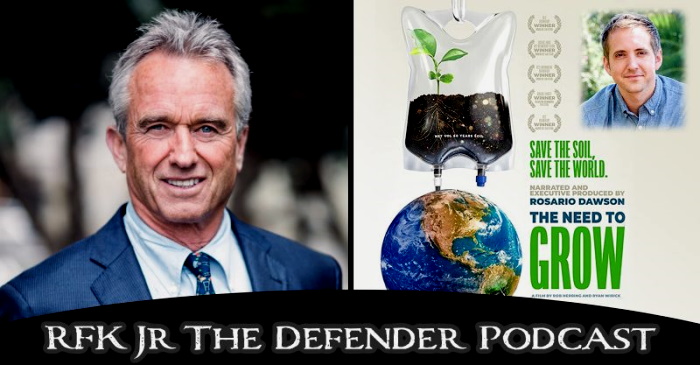 Award-winning filmmaker Rob Herring told Children’s Health Defense Chairman Robert F. Kennedy, Jr. on the “RFK Jr. The Defender Podcast” that industrial agriculture is killing life in the soil, depleting crops of key nutrients and poisoning our waterways.
Herring, a certified holistic health coach and co-founder of Integrative Pediatrics, produced “The Need to Grow,” a film that highlights the importance of healthy soil, as well as the challenges and opportunities of transitioning to an agriculture system that’s good for people, animals and the planet.
Herring discussed the difference between farmable topsoil and dirt.
“Dirt is void of life,” said Herring. “Soil is really complex” and has a “cosmic galactic level of microbial activity happening right under our noses.”
Herring said one tablespoon of healthy soil may contain up to 10 billion microorganisms — an intricate web of biodiversity and life that’s key to producing healthy food, healthy humans and ultimately, a healthy planet.
But when you ignore soil health and mistreat it with toxic agrichemicals and overtilling, said Herring, we lose the ability to grow nutritious food.
Herring said the overuse of pesticides and artificial fertilizers has significantly depleted the nutritional value of plants.
“We’re growing something that looks like a broccoli,” said Herring, “but it doesn’t have the minerals and the nutrient density that, even just a few generations ago, the broccoli would have.”
Agrichemicals also make soil less resilient when it comes to weeds, pests and even drought, said Herring.  The good news, he said, is that solutions already exist.
By ditching toxic agrichemicals and using a variety of organic and regenerative farming practices such as composting and purposeful livestock grazing, Herring said we can rebuild soil health, grow nutritious food, protect farmers and promote clean waterways.
“This is why we geek out about soil,” Herring said. “This is why it’s so exciting, it’s really a forefront of how we’re going to possibly regenerate human and environmental health.”
Herring said:
“There’s an illusion right now that we think organic is more expensive, when in reality, that system is much, much cheaper in the long term, not only from the human health [aspect], not having to pay your doctor later for the medical bills, but also just the environment of cleanup that is outsourced.”

» Industrial Farming Is Destroying Our Health and Environment
» Soil, making soil mix, seeding trays and what are my favorite seeds...
» FULL (OF IT) Benjamin Fulford 6-21-21… “Summer Solstice Turning Point as Military-Industrial Complex Takes on Medical Industrial Complex”
» Plastic Bank - Faith and a Regenerative Economy: Doing Business for the benefit of People and Planet
»  U.S. Filmmaker Repeatedly Detained at U.S. Border