OUT OF MIND » BREAKING NEWS & HOT TOPICS » THE RESISTANCE, PETITIONS, PROTESTS & RIOTS » Tens of Thousands of Canadians Rise Up to Reject the 'Great Reset' – Media Blackout 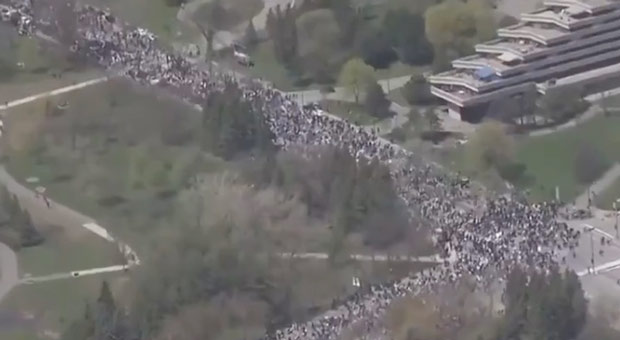 press
Tens of thousands of protesters flooded the streets
Tens of thousands of Canadians have risen up to reject the "Great Reset" by demanding their freedom and an end to government-imposed restrictions.
Angry citizens flooded the streets of Montreal, Canada, over the weekend to protest the coming implementation of new restrictions due to rollout on September 1.
The changes will force Canadians to carry mandatory papers that will control individual access to ordinary activities, such as events, bars, restaurants, and gyms.
WATCH:

SCROLL DOWN FOR MORE VIDEO 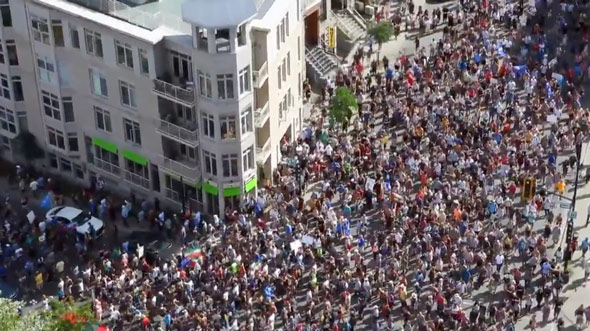 press
Huge crowds were seen gathering in the streets of Montreal
Protesters held signs and chanted for their freedom, according to The Gateway Pundit.
Even a few Trump flags and MAGA made an appearance in the massive crowd.
WATCH:

Reports from the state-sponsored Montreal Gazette claimed this was a crowd of “hundreds.”
However, an aerial view from a helicopter says it all.
WATCH:

Protesters were demanding that the government immediately hold an emergency public debate to reverse the Soviet-style mandate because it is discriminatory and infringes on their civil rights.
Unsurprisingly, officials did not grant their requests, citing the emergency powers that have enabled them to commit these gross violations of liberty since the start of the pandemic.
They fear an open discussion because it would potentially fuel "dangerous conspiracy theories."
According to them, noticing that the majority of new cases are among the vaccinated is akin to believing in lizard people.

Premier Francois Legault has rejected the idea of a debate, saying it would expose Quebecers to inaccurate, dangerous conspiracy theories... 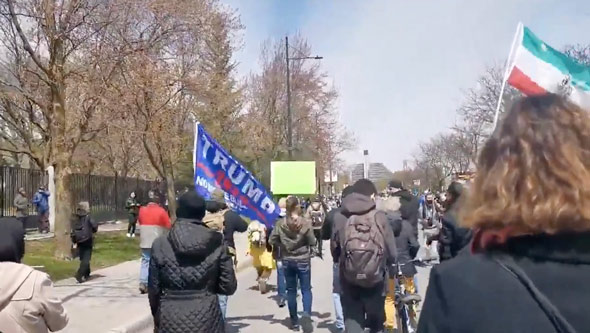 press
Protesters were seen with Trump flags and MAGA hats
Instead of listening to citizens, the liberal-dominated government is expected to put even more restrictions in place across Canada.
Canadians are planning to protest until the government makes changes and allows a public forum and they know these tyrants won’t give up their newfound authority without a fight.
Canada is just the latest country to experience a massive uprising.
Americans should wake up and follow suit.

OUT OF MIND » BREAKING NEWS & HOT TOPICS » THE RESISTANCE, PETITIONS, PROTESTS & RIOTS » Tens of Thousands of Canadians Rise Up to Reject the 'Great Reset' – Media Blackout