Soldiers Fight Back Against Military’s Upcoming Vaccine Mandate by Filing Lawsuit Against Pentagon Tue Aug 24, 2021 9:21 am 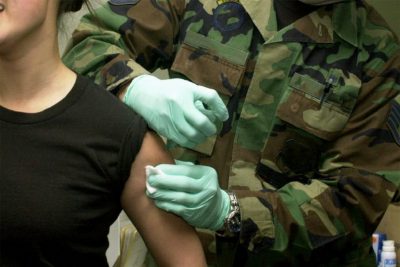 All Global Research articles can be read in 51 languages by activating the “Translate Website” drop down menu on the top banner of our home page (Desktop version).
Visit and follow us on Instagram at @crg_globalresearch.
***
The Department of Defense will require all U.S. military troops to take the COVID-19 vaccine by September 15th. The Associated Press earlier reported on Defense Secretary Lloyd Austin’s memo.
The AP reported that “the deadline could be pushed up if the vaccine receives final FDA approval or infection rates continue to rise.”
“I will not hesitate to act sooner or recommend a different course to the President if l feel the need to do so. To defend this Nation, we need a healthy and ready force,” the Defense Secretary added.
An Armed Forces member refusing to take the vaccine is subject to punishment under the U.C.M.J., the AP’s report noted. The punishment for refusal to obey an order may escalate up to court martial.
“Some unvaccinated service members have suggested they’d get the shot once it’s required, but others are flatly opposed,” the report said.
Now, some of those ‘flatly opposed’ soldiers are filing a lawsuit in court against the coming military vaccination mandate. Those listed on the lawsuit as defendants are Secretary of Defense Lloyd Austin, Secretary of Health & Human Services Xavier Becerra, and Janet Woodock, Acting Commissioner of the Food & Drug Administration.
“Plaintiffs Staff Sergeant Daniel Robert, U.S. Army, and Staff Sergeant Holli Mulvihill, USMC, individually and on behalf of all other similarly situated active duty, National Guard, and Reserve servicemembers, as documented survivors of COVID-19, file this action against the Department of Defense (“DoD”), seeking a declaratory judgment that the DoD cannot force them to take a COVID-19 vaccination under existing military regulations, federal regulations, federal law, and the U.S. Constitution,” the plaintiffs’ legal complaint states.
[ltr]Pentagon Pulls Trigger: Will Order All Troops to Get COVID Vaccine by Sept. 15[/ltr]
“The Secretary of Defense, Lloyd Austin (the “SECDEF”) has publicly notified Plaintiffs, via Memo, that he will seek authorization from the President of the United States of America (the “President”), to mandate the COVID-19 vaccine on or about September 15, 2021,” the plaintiffs note. “Upon information and belief, the DoD is already vaccinating military members in flagrant violation of its legal obligations and the rights of servicemembers under federal law and the Constitution.”
“Army Regulation 40-562 provides documented survivors of an infection, a presumptive medical exemption from vaccination because of the natural immunity acquired as a result of having survived the infection,” the legal complaint added.
“General examples of medical exemptions include the following… Evidence of immunity based on serologic tests, documented infection, or similar circumstances,” the lawsuit cites.
“Plaintiffs also seek a declaratory judgment on the separate basis that the Emergency Use Authorization (“EUA”) DoD COVID-19 Vaccine mandate, which they have been notified is imminent, cannot be issued in violation of 10 U.S.C. §1107 [U.S. Code] and its implementing regulations, including DoD Directive 6200.2, the FDA regulation of biologics at 21 C.F.R. § 50 et seq., as well as the law regarding informed consent 50 U.S.C. 1520 (‘The Nuremburg Code’),” the lawsuit added.
Legal analysts cite prior situations that suggest that legal challenges to the COVID vaccine order may fail in court.
“Legally, vaccines under emergency use authorization require service members to grant ‘informed consent’ to receive one, which they are allowed to withhold,” U.S. News reports. “The law states a president may override that concern in the ‘interests of national security,’ according to an analysis from Duke University’s Lawfire blog in February.”
Robert Sanders, chair of the National Security Department at the University of New Haven, pointed to the case of troop vaccination to protect them from anthrax. A follow-on case found such orders did not violate troops’ constitutional rights because, “The requirement to place the needs of the nation above a service member’s personal welfare applies in peacetime as well as in war.”
Professor Sanders gave his assessment of legal challenges to the military vaccination order.
“I believe such challenges will fail on the merits under the history of the anthrax vaccine’s military litigation,” he said.
The plaintiffs are also submitting in their lawsuit expert testimony from Dr. Peter McCullough, M.D., who is board certified in internal medicine and was the Chief Fellow at William Beaumont Hospital. In addition to being a cardiologist, he also holds a Master’s Degree in Public Health from the University of Michigan. He is currently a Professor of Medicine at Texas Christian University and the University of North Texas Health Sciences Center School of Medicine.
The relevant portion of the doctor’s testimony is submitted in text image format below: 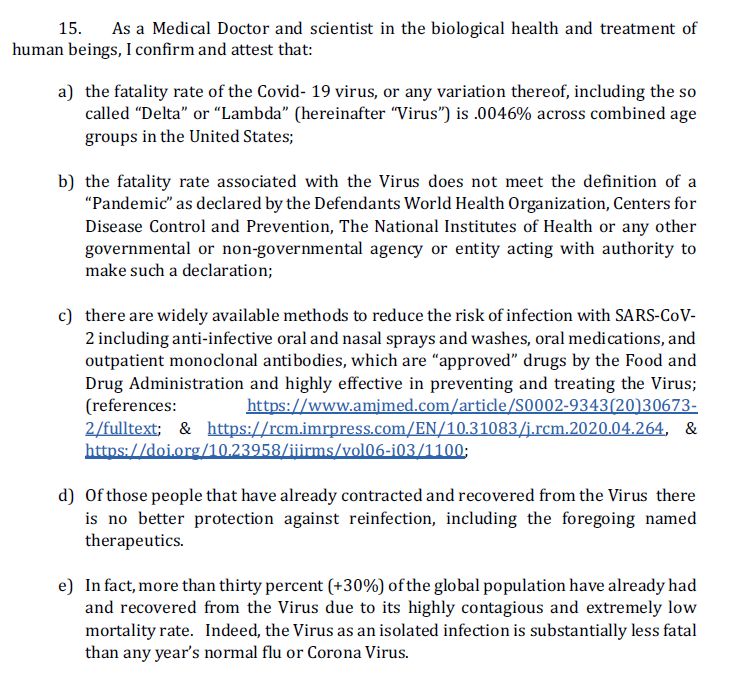 “To put it concisely and bluntly, people who have naturally created antibodies resulting from contracting and recovering from the Virus should not receive any inoculation against the virus or any family or variant thereof because it will do more harm than good,” Dr. McCullough is testifying.
The Pentagon has yet to formally issue the vaccine mandate, but the order is expected to be issued in September.
*
Note to readers: Please click the share buttons above or below. Follow us on Instagram, @crg_globalresearch. Forward this article to your email lists. Crosspost on your blog site, internet forums. etc.
Featured image is from Shutterstock