Nurses and other healthcare workers have been quitting at the fastest rate since the early days of the pandemic. 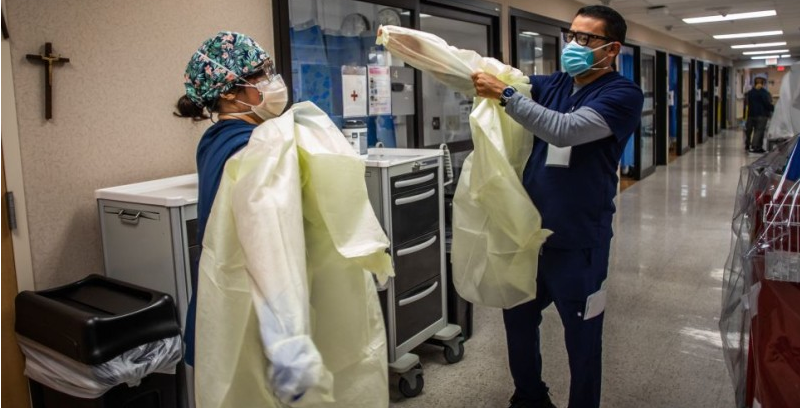 Source: Zero Hedge
As America’s hospital beds have again filled with sick COVID  patients, nurses and other healthcare workers have been quitting at the fastest rate since the early days of the pandemic, when nurses in some NYC hospitals were using garbage bags instead of PPE.

Across the Internet, on subreddits and in Facebook groups, nurses have gathered to commiserate.
But it’s not just remote areas of Arkansas and Mississippi that are having problems. Local media in California have reported that across the Golden State, low staffing levels have reached a “crisis point”.
According to a story published by a newspaper in Bakersfield, in the past month, no fewer than four emergency room nurses have quit at one Eureka hospital.
And aside from the burnout and the pressure and the stress, nurses have also cited California’s mandatory vaccination rule as one reason they’re thinking about leaving the state. Traveling nurses have been turning down assignments in the Golden State at record rates  because they don’t want to get vaccinated – and the mandate hasn’t even taken effect yet.

Cole of Scripps Health said the state’s testing requirement, imposed last week, already has discouraged some out-of-state, traveling nurses from taking temporary jobs at California hospitals.
“If they don’t want to get vaccinated, they are turning down California assignments,” he said.

Here’s more according to Bakersfield.com:
Hospitals are struggling to comply with the state’s nurse staffing requirements as pandemic-induced burnout has exacerbated an already chronic nursing shortage nationwide.
But burnout isn’t the only thing compounding California’s nursing shortage: The state’s new vaccine mandate for health care workers is already causing headaches for understaffed hospitals before it is even implemented. Some traveling nurses – who are in high demand nationwide – are turning down California assignments because they don’t want to get vaccinated.
With more people coming in for routine care that can’t be delayed any longer, hospitals are nearing a “crisis point” as the staffing shortages leave them in danger of not meeting the state’s legal minimum staffing requirements.

Hospitals say they are reaching a crisis point, straining under the dual forces of more people seeking routine care and surging COVID-19 hospitalizations driven by the Delta variant.
“Oftentimes at hospitals there are long waits and long delays,” said Dr. Tom Sugarman, an emergency physician in the East Bay and senior director of government affairs at Vituity, a physicians’ group. “There’s not enough staff to keep beds open, and patients can languish waiting.”

Nursing shortages were common in California even before the pandemic. But now resources are nearing “the breaking point”. Every time case numbers seem like they’re finally about to subside, a new wave of cases rises up.

Emotional and physical exhaustion is the primary reason nurses are fleeing the bedside, experts say. It has been a long and brutal 18 months.
“We thought the pandemic would be over soon and could take time later to deal with our emotions,” said Zenei Triunfo-Cortez, president of National Nurses United, the largest nursing union in the country, which has more than 100,000 members in its California association. “Then the second surge hit, and the third and now it’s the fourth.”
Mary Lynn Briggs, an ICU nurse in Bakersfield, said of the dozens of COVID-19 patients she has treated since the pandemic began, only three have survived.
“Some days coming home from the hospital I yell at God, I yell at myself, I yell at COVID and cry. And that’s all before I pull into my driveway,” Briggs said.

A surprising number of nurses are wary of the vaccines, so Gov. Newsom’s requirement that nurses and hospital staff must get vaccinated could end up being the straw that breaks the camel’s back.

Hospital administrators worry that the state’s vaccine mandate for health care workers, which goes into effect Sept. 30, could drive some of their workers out. Already, some report resistance among employees.
“One hospital told us they had 474 unvaccinated employees. They did a big education and incentive push. Only 12 people signed up,” said Richardson, the hospital association’s attorney.
Administrators are particularly concerned about low vaccination rates among support staff like janitors and food service workers. However, some nurses also are wary of the COVID-19 vaccine. Some nurses with large social media followings have participated in protests in Southern California, arguing that the mandates violate their personal freedom.

With staffing levels low across the US, traveling nurses working in temporary roles have been critical to help shore up hospital staff. But they’re also allowing nurses who don’t want to comply with vaccine mandates to simply pick up and leave. One expert said traveling nurses in Texas and Florida might be coming from California.

Nationwide more than 52,000 temporary health care jobs are posted, and Aya is only able to fill about 3,000 per week, she said.
“In the 16 years I’ve been in this space, I have never seen this high a need,” Morris said.
That need is creating intense competition for a limited pool of nurses nationwide.
“Nurses are getting paid premiums to work in Texas and Florida where it’s surging right now,” Sugarman said. “Those nurses have to come from somewhere, and I wouldn’t be surprised if some are coming from California.”

In short: vaccine mandates for health-care workers (most of whom have already been infected with COVID) are probably doing more harm than good as far as creating a safe and stable health-care system in the Golden State. Maybe Gov. Newsom (or his successor) should give it a rethink?

» Crisis in America: Millions of Veteran Nurses are Resigning or Being Fired Over COVID Vaccine Mandates
» California Nurse: “I Want People to Know What I Lost to this Vaccine – I am Living a Nightmare, It’s Not Worth it.”
» Largest Police Union Wins Vaccine Mandate Case – Judge Rules Vaccine Mandates “INVALID”
» Registered Nurse And Nurse Educator Of Forty Four (44) Years There Is An Epidemic Of Vaccine Injury And Death
» DISNEY EMPLOYEES – FIREFIGHTERS – NURSES TO MARCH AGAINST THE JAB FOR JOB MANDATE EVERY SUNDAY AT DISNEY