OUT OF MIND » THE INSANITY OF REALITY » GOVERNMENTS & THE NEW WORLD ORDER » UPDATE: Florida Restaurant Refusing to Serve Biden Voters Shuts Down After Selling Out of Food!

UPDATE: Florida Restaurant Refusing to Serve Biden Voters Shuts Down After Selling Out of Food!

UPDATE: Florida Restaurant Refusing to Serve Biden Voters Shuts Down After Selling Out of Food! Sat Sep 04, 2021 10:42 am


Source: daniel
A few days ago, we reported about a Florida restaurant that is giving Democrats a taste of their own medicine.
The Florida restaurant owner posted a sign on the door telling Biden supporters to take their business elsewhere.
In other words, the restaurant will not be serving Biden supporters.
Well, it turns out that the restaurant has shut down.
No…
It wasn’t shut down by leftists.
Rather, so many Trump supporters came to support the restaurant that they sold out of food!
The restaurant was forced to shut down because there wasn’t any food left in the kitchen!
In case you missed the original story, below is an image of the sign that the owner posted on the door.Follow on Telegram @WeLoveTrumpNoah Now, even international media is picking up on this story.
According to the Daily Mail:
The Florida diner where the owner posted a sign turning away Joe Biden voters after 13 US troops were killed in Afghanistan has had to shut its doors – because so many people called to buy meals for veterans that the small business ran out of food.
‘I’ve gotten so many people calling me from all over the world, from Europe, trying to purchase meals for veterans, which I still haven’t been able to organize,’ said Angie Ugarte, who posted the sign in the window of the DeBary Diner in the central Florida city of DeBary.
‘I think that the veterans will be fed for the rest of the year at the rate I’m getting donations.’
The sign told customers: ‘If you voted for and continue to support and stand behind the worthless, inept and corrupt administration currently inhabiting the White House that is complicit in the death of our servicemen and women in Afghanistan, please take your business elsewhere,’ the sign read.
The business was temporarily closed Thursday due to the overwhelming amount of donations and diners the day before.
‘Hallelujah!’ a patron said upon noticing the diner had sold out of food following Wednesday’s rush of support.
That didn’t stop supporters from stopping by on Thursday, with one woman posing in front of the diner holding a Trump 2020 banner, while others coming from Daytona Beach, Hunter’s Creek near Kissimmee, and Monticello just east of Tallahassee.
Rod Phillips, a member of the Vietnam Veterans of America Florida State Council, shook Ugarte’s hand for her support of military veterans.
‘We wanted to come over here and thank you personally,’ Phillips told Ugarte.
‘I respect the presidency of the United States, but this could have been handled much better, much better,’ he said.
‘Being a Vietnam veteran and combat-wounded, I don’t wish war on anybody. But there is a proper time and place to get out of there.’
‘One American is too many to be left behind enemy lines,’ he added.
Ugarte, who has owned the diner for five years, said she posted the sign last week after the suicide bombing by ISIS-K at Kabul airport that killed 13 US troops and nearly 200 civilians in Afghanistan.
She intends to keep the sign up as long as there are Americans still stranded in the country, adding she felt like it was ‘the only thing’ she could do to help the situation.
The owner said a lot of her regular customers at the diner are military vets, and has a wall inside featuring military decoration.
Reactions from her customers have been varied, and said some people ‘turn around and walk away’ while others have said they liked it.
She said: ‘If you really, really still stand behind what’s allowed this to happen in the way that it has happened — which was unnecessary — then I really, really don’t want to be associated with you in any way and I certainly don’t want your business.’
This comes after restaurants across the country have left powerful memorials of empty and full glasses of beer to pay tribute and raise funds for the fallen soldiers.
At one Ohio tavern near the home of one of the slain troops, a sign warned patrons: ‘Reserved for the 13 soldiers who never made it home’, and at a brewing company in New York, staff topped off the 13 reserved pints throughout the night to keep them cold and donated a portion of the restaurant’s proceeds to victims’ families.
The families of the soldiers gathered in Dover, Delaware, on Sunday where the remains of the 13 troops who died in a suicide bombing on Thursday arrived.
Biden was at the base for the dignified transfer of the fallen.
This news comes as Democrats attempt to promote “cancel culture.”
They are quickly learning the hard way that Republicans can also play that game.
99.9% Pure Investor Grade Silver Trump Collector Coins!
We expect the restaurant to get another delivery of food and ingredients mid-next week.
Will they sell out again?
Time will tell! 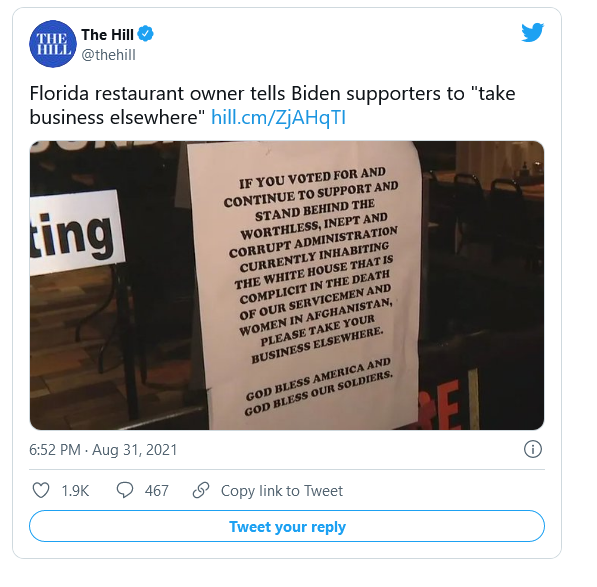 OUT OF MIND » THE INSANITY OF REALITY » GOVERNMENTS & THE NEW WORLD ORDER » UPDATE: Florida Restaurant Refusing to Serve Biden Voters Shuts Down After Selling Out of Food!