OUT OF MIND » THE INSANITY OF REALITY » GOVERNMENTS & THE NEW WORLD ORDER » Breaking – Did China just Declare WAR? 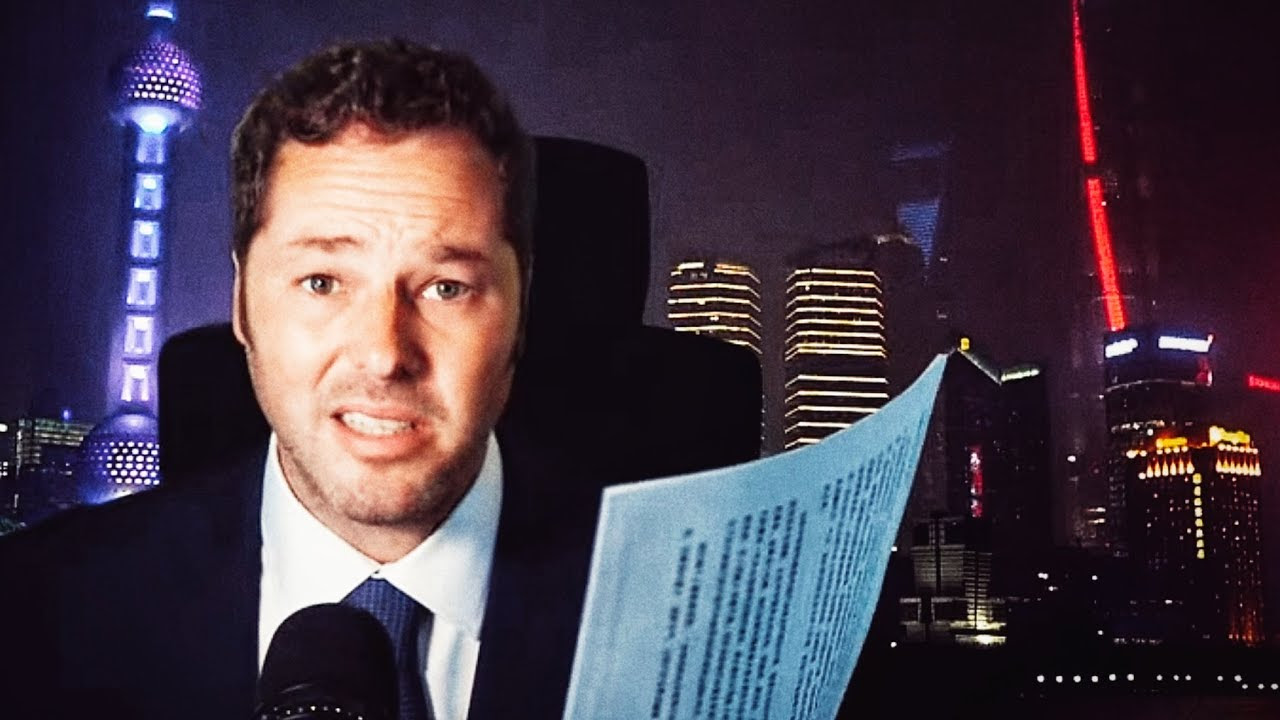 
South African YouTuber, Winston Sterzel and his American friend, Matthew Tye in 2017 were two Westerners living in China and married to Chinese women, making amusing videos, sharing their excitement and love for that country and offering advice to Westerners interested in living there. They even built their own motorcycles and made road trip documentaries in the Chinese outback.
They never thought, back in 2017 that they would be forced to leave. In recent years, there’s been a major clampdown in China. Despite their having lived there for over a decade, they could no longer do simple things like buy train tickets without a Chinese government ID and Chinese policy would never enable them to become citizens. All four and their children recently moved to California.
CCP TELLS ITS CITIZENS THAT U.S. IS LAUNCHING “FEROCIOUS” ATTACKS AGAINST CHINA

I found Winston’s report very interesting, because while we, in the US, are reeling at the CCP’s apparent control of the US government, military, regulatory agencies and corporations, having stolen our elections and won Afghanistan, plus billions of dollars of matériel and trillions in infrastructure and untold reserves of lithium needed for the car batteries that we will be forced to use by the Green New Deal, which was recently passed in the infrastructure bill.
To us, the CCP seems conniving beyond imagining, with a seemingly all-powerful blackmail grip on the leaders of the West – particularly, on the Biden family.
The CCP tells a very different story to the Chinese people. Winston gives us an insight into how the Chinese Government is manipulating their people with a recent press release on the front page of Xinhua News, the official news outlet for the Chinese Communist Party that has also been published in the People’s Daily newspaper, which essentially announces a Cultural Revolution 2.0; a rejection of Capitalism, a war against the United States and a new austerity that sounds like it might be the Chinese version of the Great Reset.
Winston reads the article’s conclusion first:

He says, “Remember, everybody’s read this. Nobody doesn’t read the People’s Daily….so the vast majority of the people now take it that the United States is launching biological warfare, ferocious and barbaric attacks against China and so China needs to prepare.
“The meat of the article…explains how all these changes that Xi Jinping has put into place are good and why they are going to prepare China for a war against America, because that’s what this is. I think everybody can read between the lines, here…
DISAPPEARED BILLIONAIRES, CULTURAL REVOLUTION 2.0
“The next section then goes ahead to attack Capitalism and it’s there to attack these big enterprises in China…you [may] know …[what’s] been happening with Chinese tech companies, in particular; you know Alibaba’s IPO got shut down before it could even start to fly.
“Jack Ma, the owner of Alibaba and the IP Thieves has disappeared and is now no longer in the limelight. He’s been quashed and taken out, along with a lot of other Chinese billionaires, who have been silenced or been taken care of and a lot of big companies like DiDi.
“You saw what happened with DiDi tried to list in the American Stock Exchange – they did list on the American Stock Exchange and then suddenly, China pulled a big number on them and removed their apps from the store and the stock fell…
“It says,

“‘The series of rectification actions by the People’s Republic of China are telling us that China is undergoing major changes, from the economic, financial, cultural, and political fields to a profound change, or a profound revolution.

“This is important wording, Guys. This…is now, in black and white, on Chinese state media, saying that the Cultural Revolution 2.0 has begun…It’s something that I’ve been predicting for a very long time would happen. I didn’t realize that it would start happening and being acknowledged so soon. Anyway, let’s continue:

“‘This is a return from the capital group to the masses of the people, and this is a transformation from capital-centered to people-centered. Therefore, this is a political change, the people are becoming the main body of this change again, and all those who block this people-centered change will be discarded.

“What he’s doing is he’s talking about Jack Ma and the other billionaires – and anyone who’s kind of drunk on the idea of Western capitalism: ‘You will be discarded if you get in the way of this people-orientated revolution that they’re talking about here.
“See, now they’re making enemies out of capitalism, here; making enemies out of the idea of capitalism and saying that it has to go back to ‘people-orientated’, rather than Capitalism-orientated…This is the wording coming out of the government here, Guys. This is what everyone’s reading in China.

Winston says, “They want to now return to the core idea of the Chinese Communist Party, which is to hate Capitalism, hate the West and try to do its failed experiment all over again.
“Now, this paragraph that I’m about to read next, this is an important one:

“See how they’re demonizing Western culture? Demonizing the idea of the entertainment industry and demonizing Capitalism, all in the first bloody sentence, there? Let’s continue:

“‘The return of red, the return of heroes, and the return of blood. Therefore, we need to control all cultural chaos and build a lively, healthy, masculine, strong, and people-oriented culture. We need to crack down on the chaos of big capital manipulation, platform monopoly, and bad money driving out good money in the capital market. Guide the flow of funds to entity enterprises, to high-tech enterprises, and to the manufacturing industry.

ENGLISH-LEARNING APPS BEING SHUT DOWN
“The next part he’s talking about the chaos in the education industry and how it has to basically be reformed, so that it’s ‘fair’ for the people. (Sarcastically) That’s why we’re seeing all the training centers being shut down; apps, like Duolingo, other English-learning apps being shut down.
“You know, it’s not being shut down out of fairness, okay? For parents, when it comes to teaching their children – because parents want their children to learn – it’s their own choice that’s being shut down, because they don’t want Western influence to creep in through the English language, which is something that has been happening for years and years.
“Because, when you learn English you tend to learn Western culture at the same time…Anyone who’s learned Chinese, you learn Chinese poems, you learn about ancient Chinese history, things like that and the same thing goes with English. When you learn English you learn about the culture, you get some of the influence – and the Chinese Communist Party is deadly afraid of this.
“The piece continues,

“‘The current efforts to rectify the entertainment, art, and film and television circles are far from enough. We must use all means to combat the various star-chasing and fan-chasing phenomena that exist in the current society. Completely put an end to the phenomenon of nymphomaniacs and small fresh meat in the social character…

“Shaoxin ro, ‘little fresh meat’…I’ve got to explain that one to you. A ‘little fresh meat’ is what people refer to those very feminine male stars in China. You know the ones I’m talking about. Very very white skin, very delicate features, you know, very prissy. You know exactly what I’m talking about, kind of like Korean boy bands…
“So, they want to get rid of the this whole fan clout-chasing thing; doesn’t want people to worship nymphomaniacs and little fresh meats in society. So, he doesn’t want young people to aspire to be any of these kind of celebrities. That’s the gist of it, right?
“This last bit is, again quite worrying, because this is basically just Cultural Revolution stuff.” He says, “‘laborers and ordinary people will become the protagonists and masters of literature and art.'” So, it will be the ordinary man who’s going to be the protagonists, the stars. This is all that old Marxist garbage rhetoric that they’ve done in the past.
WILL WE REPLY TO THESE LIES?
“What I’m going to stress, once more is that while here, in the Western World, we are walking on eggshells, worried about being called a racist, because we say that the virus came from Wuhan – where it really did – China is putting out things like this, that are calling us the enemy; that are saying that we are not only conducting biological and cyber attack warfare against China and the Chinese people but we are an enemy of the Chinese people and Western values and ideas are an enemy of the Chinese people.
“And here we sit, worried that we’re going to be called a racist because we say factual statements. It has made us as a society in the West, incredibly weak and easy pickings for a very strong, steadfast government like the CCP, who allows opinions like this to go out in the biggest state media…
“They encourage people to consume this, because that is their end goal, if you hadn’t noticed. It is what’s being said in this particular document is exactly what the Chinese Communist Party has been doing, with all these changes: cracking down on the entertainment industry, cracking down on the tech industry and on business; capitalist billionaires and that are all fleeing or they’ve been locked up or what have you; the educational system where they’ve banned all foreign textbooks and are now banning for-profit training centers and even language exchange apps.
“This [press release], right here is factual. It’s not an opinion. So what are we doing, Rest-of-the-World? What are we doing when we allow China to badmouth us all like this, to our face, to 1.4 billion Chinese people?
“What are we doing? We show them nothing but respect. We worry about hurting their feelings  – hurting the feelings of the Chinese people. It’s about time that this stops. It’s about time that we face this kind of insult head-on and we reply to things like this – not at all, directing any of our negative energy or grievances towards Chinese people but to the government that allows this sort of rhetoric to be blasted out. Maybe it is time for the rest of the world to wake up. Take this and give a proper reply to the CCP.”

OUT OF MIND » THE INSANITY OF REALITY » GOVERNMENTS & THE NEW WORLD ORDER » Breaking – Did China just Declare WAR?