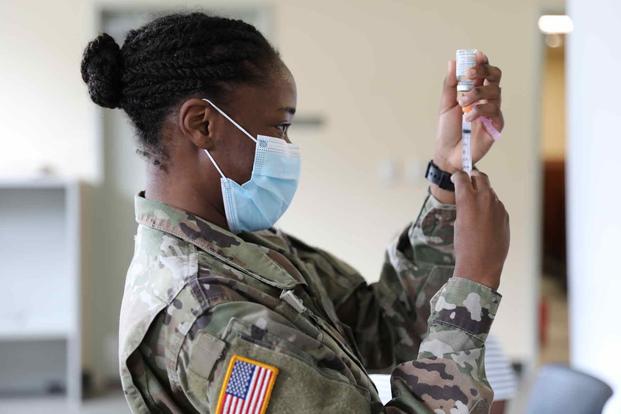 Pfc. Shaniah Edwards, Medical Detachment, prepares to administer the Moderna COVID-19 vaccine to soldiers and airmen at the Joint Force Headquarters, February 12, 2021. (U.S. Army National Guard photo by Sgt. Leona C. Hendrickson – Source.)
by Brian Shilhavy
Editor, Health Impact News
Several military members told Health Impact News today that their commanders are coercing members of their unit to get the COVID-19 shot TODAY (September 7, 2021) or face the consequences of disobeying a direct order.
One member stated that when they went by the local pharmacy in a drug store, there were many military members lined up to get the shots today, fearful of the consequences if they don’t.
And this is in spite of the fact that military officials are saying publicly that service members still have 2 to 3 months to comply, according to Military.com.

2 Sep 2021
Military.com | By Konstantin Toropin
Sailors and Marines now have 90 days to get vaccinated against COVID-19 or risk disobeying a lawful order, a violation of the Uniform Code of Military Justice, the maritime branches’ top leaders said in a series of messages released Tuesday and Wednesday.

Airmen Have Less than Two Months to Get Fully Vaccinated

7 Sep 2021
Military.com | By Stephen Losey
The Department of the Air Force has set a tight two-month deadline for active-duty troops to be fully vaccinated against COVID-19. Those who don’t get the shot in time could be punished under the Uniform Code of Military Justice.
Airmen and Space Force Guardians must be fully vaccinated – including a two-week period after a final shot – by Nov. 2, the Air Force said in a press release Friday. Air National Guardsmen and reservists have until Dec. 2.

Apparently the military commanders are following their own schedule, regardless of what is being stated publicly by the various branches.
Lawmakers in the U.S. House of Representatives have now proposed legislation that would prevent the military from issuing dishonorable discharges for service members who refuse the COVID-19 vaccine.

2 Sep 2021
Military.com | By Travis Tritten
House lawmakers have backed legislation prohibiting dishonorable discharges for troops who refuse the COVID-19 vaccine, as the Navy gave its sailors 90 days to get the shot this week and the Army and Air Force were poised Thursday to enforce their own timetables.
Legislation sponsored by Rep. Mark Green, R-Tenn., an Army veteran, requires only honorable discharges for anyone who is separated from the military over refusing to be vaccinated. It was added to the fiscal 2022 defense authorization bill, passed by the House Armed Services Committee on Thursday.
“No American who raises their hand to serve our Nation should be punished for making a highly personal medical decision,” Green said in a statement after the committee vote.

However, service members are telling Health Impact News that this is what some of them are being threatened with, dishonorable discharge, while others have said they have been threatened with demotions and being barred from reenlisting. 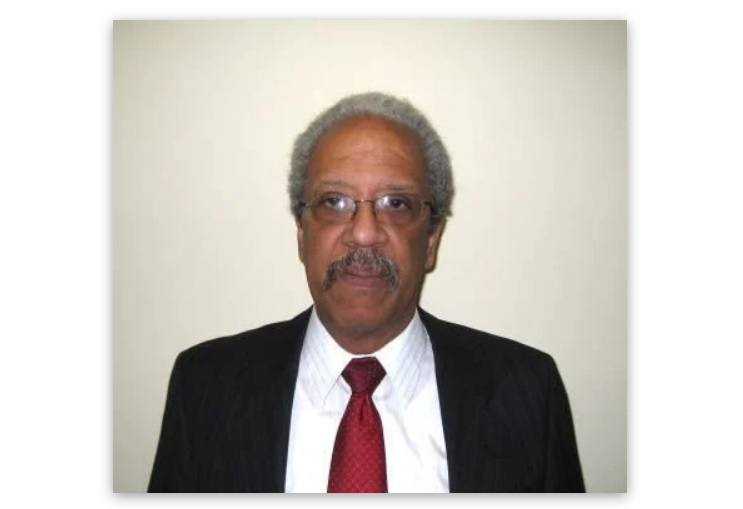 Circuit Court Judge Raymond P. Moore denied service members a TRO against mandatory COVID-19 shots, trusting the criminal CDC over expert testimonies from doctors. Image source.
On August 17, 2021, two military members filed a lawsuit in federal court in the State of Colorado, claiming that they represented 200,000 service members who were not vaccinated for COVID-19, but that they had previously contracted COVID-19 and recovered, and that therefore there was no need to be vaccinated against COVID-19, as they had “natural immunity.”
On August 24, 2021, Secretary of Defense Lloyd Austin issued a Memorandum for “SENIOR PENTAGON LEADERSHIP COMMANDERS OF THE COMBATANT COMMANDS DEFENSE AGENCY AND DOD FIELD ACTIVITY DIRECTORS” which stated:

I therefore direct the Secretaries of the Military Departments to immediately begin full vaccination of all members of the armed Forces under DoD authority on active duty or in the Ready Reserve, including the National Guard, who are not fully vaccinated against COVID-19. ([url=https://medicalkidnap.com/Users/user/Downloads/Telegram Desktop/MEMORANDUM_FOR_MANDATORY_CORONAVIRUS_DISEASE_2019_VACCINATION_OF.pdf]Source[/url].)

So on August 31, 2021, Todd Callender, counsel for the military Plaintiffs, filed a motion for a Temporary Restraining Order (TRO) to stop this directive from being enforced, which was heard by Judge Raymond P. Moore, who then denied the TRO on September 1, 2021.
The Plaintiffs had expert testimony from an affidavit by Dr. Peter McCullough, stating that “people who have the naturally created antibodies resulting from contracting and recovering from the Virus” should not be vaccinated because “it will do more harm than good.”
Judge Moore rejected his testimony and the evidence provided by the plaintiffs, because it was contrary to what the CDC states.

But Plaintiffs ignore all contrary opinion evidence, including obviously relevant guidance from the Centers for Disease  Control and Prevention (“CDC”) recommending vaccination regardless of whether a person has already had COVID-19 because research has not yet shown people are protected once they recover from the virus.
See Frequently Asked Questions about COVID-19 Vaccination, CDC Website, https://www.cdc.gov/coronavirus/2019-ncov/vaccines/faq.html (last visited Sept. 1, 2021).
The Court is not compelled to view Plaintiffs’ evidence in a vacuum or an echo chamber. As a result, the evidence cited by Plaintiffs coupled with their unsubstantiated insistence on their own natural immunity is insufficient to establish a clear and unequivocal right to a TRO under the circumstances of this case. (Read full opinion here.)

Again, to expect relief from COVID-19 vaccine mandates from the judiciary is just not reasonable. The system is rigged. They will quote the CDC, Anthony Fauci, and a whole host of other corrupt government agencies and leaders to deny facts and keep the COVID-19 narrative going that benefits the Pharmaceutical industry and their Wall Street Billionaires and Bankers.
The judiciary works for these Wall Street Billionaires and Bankers, not for the public.
Mass non-compliance is what is needed now, and while there are signs that those in law enforcement and other government agencies are now forming groups to resist (See: Police, Firefighters In LA Form Group To Resist Vaccine Mandates, for example), where are the military commanders who take seriously the oath they took to protect this country and their citizens??
One of the military members that Health Impact News corresponded with today wrote:

As much as I value my uniform, my time in service and fighting back against such obvious abuses of power I’m coming more and more to the realization that this is the new world order, so to speak.
These vaccines aren’t going away no matter how long or how bitterly we fight this in the courts.
It’s time to tell the system to go **** itself and start figuring out how to best take care of ourselves and our families outside of the system.
Our military leadership has no concern for our wellbeing and they have made it clear that they will punish those who can’t see things from their perspective.
I signed up to defend the Constitution and freedom and now my military leadership is intent on violating both. I’m no longer interested in serving my country in this capacity. It’s time to leave while I can still walk to the door.