OUT OF MIND » BREAKING NEWS & HOT TOPICS » COVID-19 » Hateful Joe Rogan Is Spreading Misinformation and Must Be Stopped!

Hateful Joe Rogan Is Spreading Misinformation and Must Be Stopped! 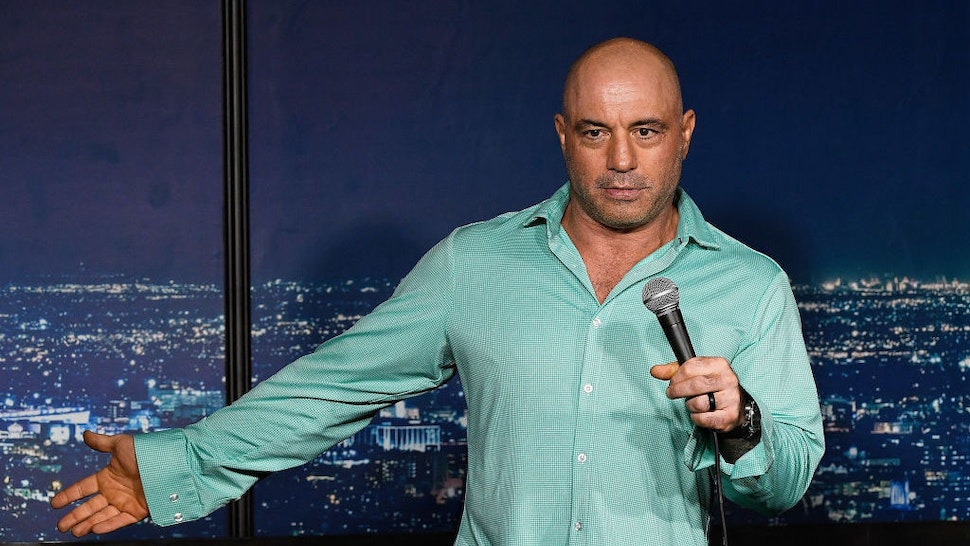 Michael S. Schwartz/Getty Images
Popular podcast host Joe Rogan floated taking CNN to court after a high-profile reporter for the network falsely claimed on air that Rogan took horse dewormer to treat COVID-19.
“Do I have to sue CNN? They’re making s*** up. They keep saying I took horse dewormer. I literally got it from a doctor. It’s an American company. They won the Nobel Prize in 2015 for use in human beings, and CNN is saying I’m taking horse dewormer,” Rogan said on his podcast Tuesday. “They must know that’s a lie.”
Rogan aired his grievance with the network after CNN chief domestic correspondent and anchor Jim Acosta falsely claimed that Rogan was taking a livestock dewormer and other unproven treatments to deal with COVID-19.
“The podcast host Joe Rogan, he came down with COVID. He says he’s been taking the livestock dewormer ivermectin as well as other treatments that people talk about on the internet and so on. Doesn’t have any effect on COVID, obviously,” Acosta said during a Sunday interview with Anthony Fauci, director of the National Institute of Allergy and Infectious Diseases.

Dr. Fauci tells @Acosta that disinformation, like that being spread by Tucker Carlson and Joe Rogan, is, "one of the enemies of public health." pic.twitter.com/4A3gUB3rWZ
— Sarah Reese Jones (@PoliticusSarah) September 5, 2021

‘A Pernicious, Insidious, Awful Practice’: How The Biden Administration Is Editing Our News


Rogan, host of “The Joe Rogan Experience,” announced over his Instagram page last week that he had tested positive for COVID-19 and was undergoing a variety of different treatments, including the malaria drug ivermectin and monoclonal antibodies. Rogan’s video announcement set off a wave of misinformation among journalists and others about ivermectin, an anti-parasitic drug that is used to treat both humans and livestock.
Rogan said that “multiple doctors” recommended he take ivermectin to treat COVID-19. “They try to make it seem like I’m doing some wacky s*** that’s completely ineffective and CNN was saying that I’m a distributor of misinformation,” Rogan said.
The news of Rogan’s COVID treatment appeared to trigger a string of false stories about ivermectin. As The Daily Wire reported:

The Associated Press had to issue a correction to an article published in late August that claimed 70% of calls made to the Mississippi Department of Health were from people who had ingested the livestock version of Ivermectin.
The story followed media hyping the idea that people were taking a common horse dewormer to treat COVID-19. Someone, somewhere may have done this, but the media has treated it as if it is a common phenomenon — and have been proven wrong.

In another instance of misinformation, a false news story of an Oklahoma hospital being overrun by patients overdosing on ivermectin was pushed by numerous journalists, commentators, and others. The hospital later released a statement correcting the record, knocking down the claims of a former doctor who left the hospital months ago. The statement said:

Although Dr. Jason McElyea is not an employee of NHS Sequoyah, he is affiliated with a medical staffing group that provides coverage for our emergency room.
With that said, Dr. McElyea has not worked at our Sallisaw location in over 2 months.
NHS Sequoyah has not treated any patients due to complications related to taking ivermectin. This includes not treating any patients for ivermectin overdose.
All patients who have visited our emergency room have received medical attention as appropriate. Our hospital has not had to turn away any patients seeking emergency care.
We want to reassure our community that our staff is working hard to provide quality healthcare to all patients. We appreciate the opportunity to clarify this issue and as always, we value our community’s support.

OUT OF MIND » BREAKING NEWS & HOT TOPICS » COVID-19 » Hateful Joe Rogan Is Spreading Misinformation and Must Be Stopped!