Perseverance’s first cored-rock sample from Jezero Crater, Mars, is now enclosed in an airtight titanium sample tube, making it available for retrieval in the future, according to members of the Perseverance team at NASA’s Jet Propulsion Laboratory. Through the Mars Sample Return campaign, NASA researchers and their colleagues from ESA are planning a series of missions to return the Perseverance’s sample tubes to Earth for closer study. 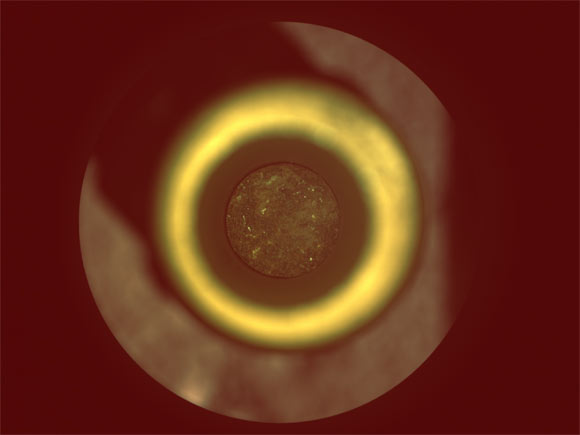 The sample of Mars rock is seen inside a titanium container tube in this image taken by the Sampling and Caching System Camera (CacheCam) onboard NASA’s Perseverance rover. Image credit: NASA / JPL-Caltech.
The sample-taking process began on September 1, 2021 when the rotary-percussive drill at the end of Perseverance’s robotic arm cored into a flat, briefcase-size Mars rock nicknamed Rochette.
After completing the coring process, the arm maneuvered the corer, bit, and sample tube so the rover’s Mastcam-Z camera instrument could image the contents of the still-unsealed tube and transmit the results back to Earth.
After mission controllers confirmed the cored rock’s presence in the tube, they sent a command to complete processing of the sample.
On September 7, 2021, at 12:34 a.m. EDT, Perseverance transferred the sample tube and its Martian cargo into the rover’s interior to measure and image the rock core.
It then hermetically sealed the container, took another image, and stored the tube.
“NASA has a history of setting ambitious goals and then accomplishing them, reflecting our nation’s commitment to discovery and innovation,” said NASA Administrator Bill Nelson.
“This is a momentous achievement and I can’t wait to see the incredible discoveries produced by Perseverance and our team.”
“For all of NASA science, this is truly a historic moment,” added Dr. Thomas Zurbuchen, associate administrator for science at NASA Headquarters.
“With over 3,000 parts, the Sampling and Caching System is the most complex mechanism ever sent into space,” said Dr. Larry James, interim director of NASA’s Jet Propulsion Laboratory.
“Our Perseverance team is excited and proud to see the system perform so well on Mars and take the first step for returning samples to Earth.”
“We also recognize that a worldwide team of NASA, industry partners, academia, and international space agencies contributed to and share in this historic success.”
_____
This article is based on text provided by the National Aeronautics and Space Administration.