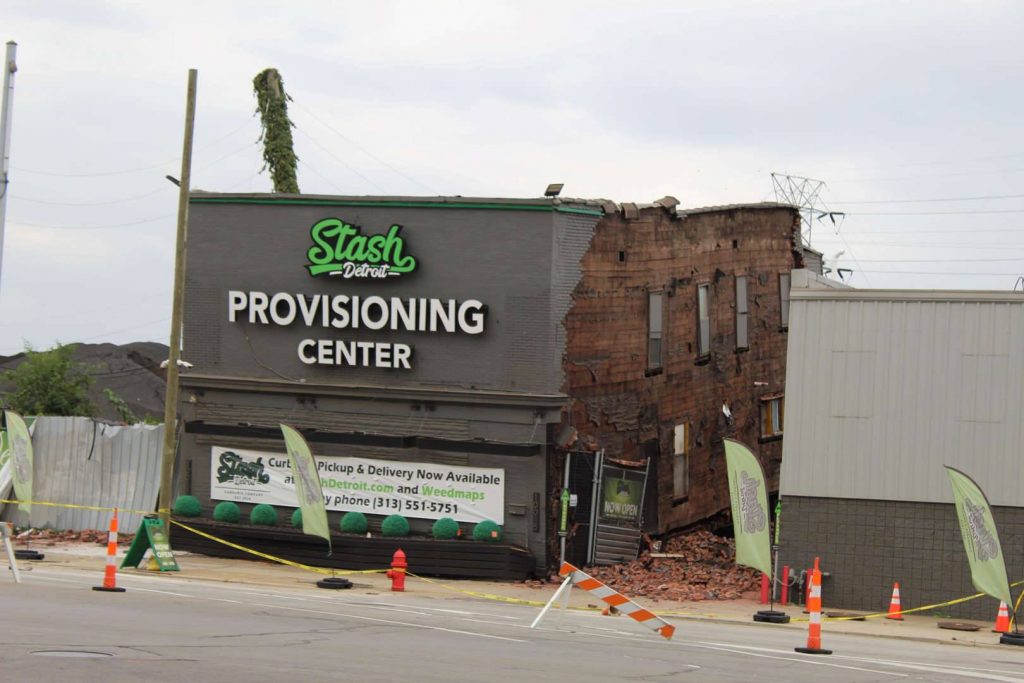 A building was heavily damaged.
The incident happened near West Fort Street and Dearborn Street late Saturday night, September 11, 2021, and is being investigated in collaboration from the Great Lakes Water Authority and the City of Detroit.
Details on the incident were limited Sunday afternoon, with DTE stating that no natural gas explosion occurred, but that DTE infrastructure had been impacted by a water main break. Meanwhile, the Great Lakes Water Authority, or GLWA, reported that a gas explosion of some kind had taken place and caused a water main break.

Late Sunday, in a news release, the Detroit Department of Public Works announced indefinite road closures and a damaged buildings’ impending demolition due to an “unknown underground issue.“
West Fort Street is closed at Miller and Woodmere streets, and Dearborn Street is at Riverside and Stone streets.
The Detroit Fire Marshal also found an emergency contractor to demolish a commercial building at the intersection of the buckled road, which was “heavily damaged due to the underground issues and is considered at immediate risk of collapse onto the sidewalk and utility lines,” the release stated.
U.S. Rep. Rashida Tlaib, D-Detroit, on Sunday posted on social media photos of Dearborn Street buckled, appearing several feet higher than its usual level. She wrote in the post that strong smells are being reported in the area and urged residents in surrounding neighborhoods to check on each other.

“We don’t know what this is and with a combined sewer system, we have to be very cautious,” Tlaib said.
State Sen. Stephanie Chang, D-Detroit, in turn, shared the post as well and, too, encouraged residents smelling odor in the area to call the Michigan Department of Environment, Great Lakes and Energy’s pollution alerting hotline 800-292-4706. 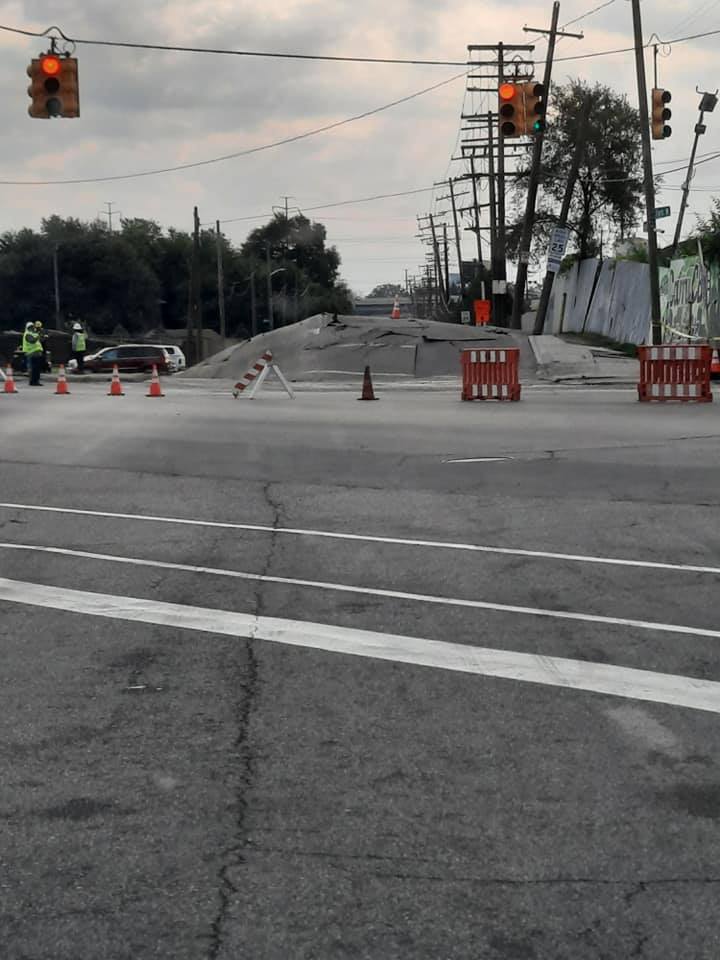 What caused road buckling in Southwest Detroit still a mystery
“At this time, there is no evidence to indicate natural gas was the cause of the incident; a natural gas explosion did not occur,” DTE Energy said in a statement. “However, parts of DTE’s gas and electric infrastructure were impacted by a water main break. DTE personnel are on site to ensure public safety as well as the integrity of the natural gas and electric infrastructure systems.”
Michelle Zdrodowski, chief public affairs officer for GLWA, reported that a gas explosion caused the water main break, but could not provide further details.
A field service team responded to the scene and the break was isolated on both sides, she said. She said GLWA workers were asked to leave so DTE could work. 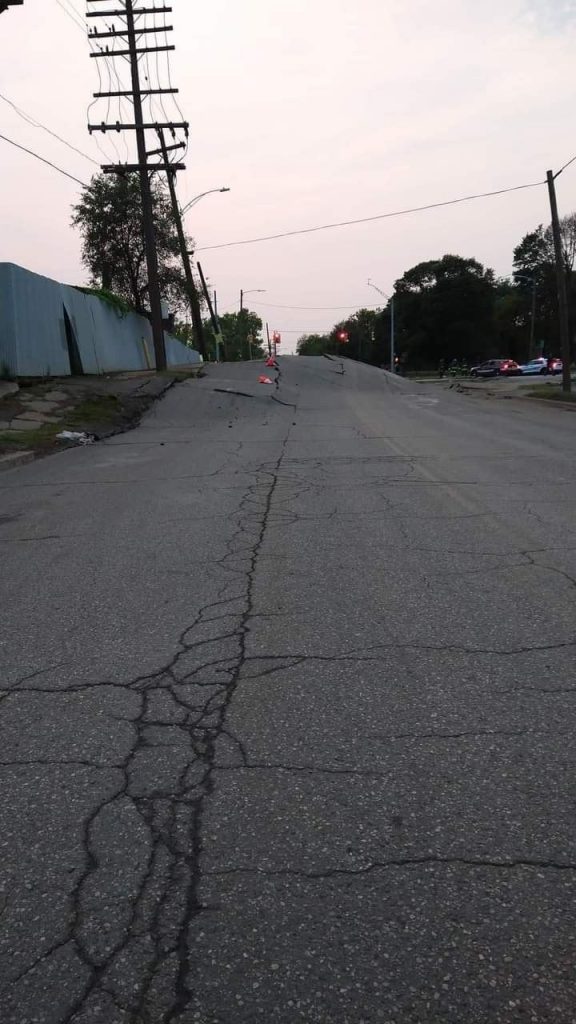 Officials are investigating an area where part of a road buckled and an odor was present in southwest Detroit over the weekend.
A spokeswoman for DTE, Clare Liening, when asked about GLWA’s statement that a gas explosion occurred, said that no injuries had taken place and that an investigation was underway.
John Roach, spokesperson for the mayor’s office, directed questions on the incident to the two agencies.
Tiffani Jackson, director of media relations for the Wayne County Executive Office, on Sunday afternoon said that the roads division was providing support as needed, but that the county was otherwise not involved. 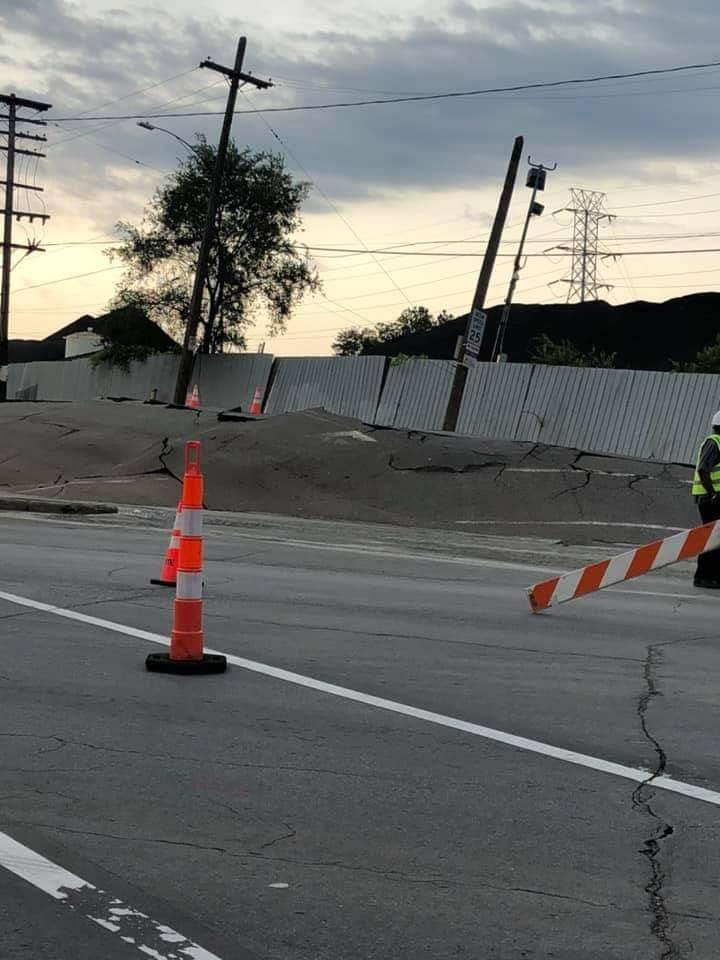 A gas explosion of some kind has triggered a water main break which led to the road to buckle in Detroit.
The location of the incident is a short distance from the Ford Dearborn Truck Plant. Ford Motor Co. has already this month grappled with issues at the Ford Flat Rock Assembly Plant, after it leaked benzene-containing vapors into the city’s sanitary sewer system and residents were asked to evacuate.
“The incident was not on Ford property. We are not aware of any impact on Ford or our facilities,” Kelli Felker, Ford global manufacturing and labor communications manager. 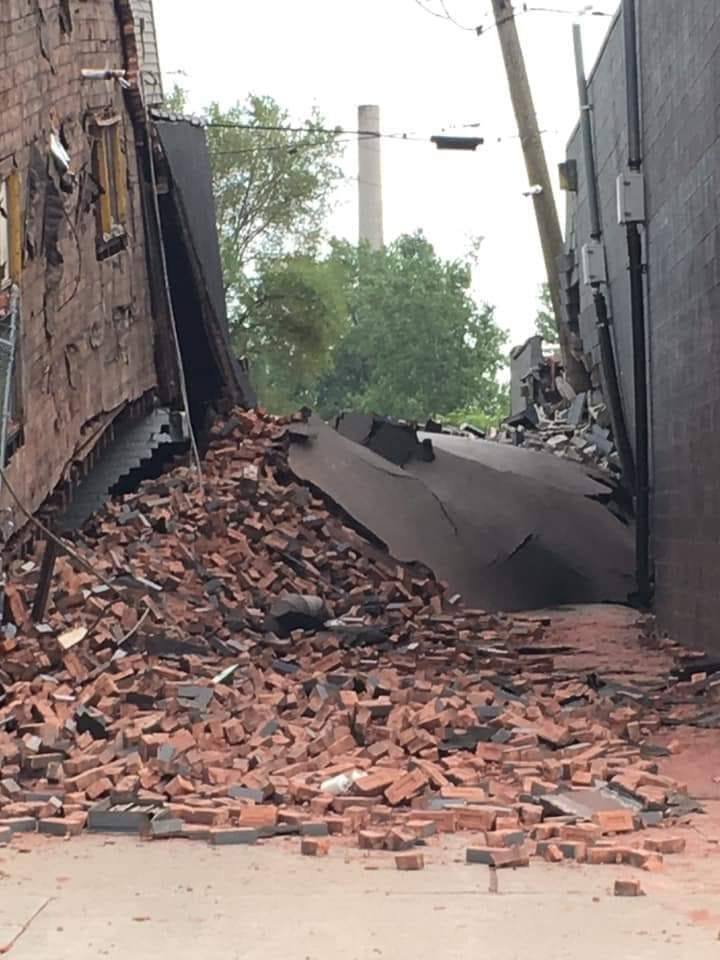 A building was leveled by the explosion
Everyone in the store was able to evacuate in time, Babcock told the Free Press, and there were no injuries.
“We’re just grateful everyone got out safely,” Babcock said.
She’s been smelling gas since June, and workers had been out a few times for maintenance, she said. They’d been reaching out to DTE, she said.
Babcock said earlier in the day that the store building may have to be torn down as it rests on unstable ground. It was unclear, at the time of the city news release, if it was the building expected to be demolished.
“We’re planning to definitely reopen as soon as we can, probably find a new location,” Babcock said earlier in the day.

Amanda Madrigal, a resident near the incident, said she heard a small popping noise around 8 p.m. Saturday night.
“It’s scary. My kids are scared,” Madrigal, 40, said. “It has smelled like gas all day today, and before that, you could smell the gas when you were at the stoplight.”
With industrial plants, a scrap yard and trucks constantly driving around nearby, Madrigal said, “This is just one more thing my family has to breathe in.”
Madrigal said she’s been living on that black for more than 30 years, with her uncles and dad down the street.
“I love this street, but the stuff happening around us is crazy. It’s like they don’t care that there are people that still live on this street,” Madrigal said. “Not everyone can afford to just up and move.”
DTE said that if residents suspect or smell a gas leak, they should leave the area immediately, call 911, then call DTE at 800-947-5000, or their natural gas provider. [DFP]
Now subscribe to this blog to get more amazing news curated just for you right in your inbox on a daily basis (here an example of our new newsletter).
You can also follow us on Facebook and/ or Twitter. And, by the way you can also make a donation through Paypal. Thank you!
You should really subscribe to QFiles. You will get very interesting information about strange events around the world.

» Sinkhole Sparks State of Emergency In Detroit After House Buckles, Street Evacuated
» EMF Wars Amp-Up to the Max – As The Cabal/Veil’s Last Stand Buckles.
» 72Days In Jungle And Underground Building
» Warped road caused by 'mystery underground movements'
» Road Workers Found A Mysterious Box Underground And You Won’t Believe What Was Inside… WHOA!