Source: Matt Agorist
Throughout Europe, despite their heads of state promising otherwise, countries have begun to roll out vaccine passports. Under the tyrannical measures, citizens must present proof of vaccination, usually on a smartphone, before being allowed in places like bars, restaurants or social events. Naturally, this attack on the freedom to travel and socialize has sparked massive backlash by those who do not wish to submit to tyranny.
Last month, when these announcements were made and the passes rolled out in Europe, hundreds of thousands of people took to the streets in France, Switzerland, and Italy. Many of the protests turned violent as police clashed with the modern freedom fighters.
Other protests, however, did not turn violent and in some instances, police even joined in with the protesters in an ostensible effort to end up on the right side of history.
“Personally, I am not vaccinated, and I won’t be,” said one French protester, according to euronews. “It doesn’t matter what we are forbidden from doing, going to stores, swimming pools, cinemas, it doesn’t matter … Life is priceless. Freedom, that’s precisely it, freedom to not to be vaccinated, and not to give in to the government’s blackmail.”
In Switzerland, beginning on the 13th of September, the COVID-19 certificates became mandatory for all persons over the age of 16, including tourists, who wish to access indoor areas of restaurants, cultural and leisure facilities, and several other events.
“Based on the overall situation, the Federal Council has decided to extend the certificate requirement for persons aged 16 and over. This is to prevent hospitals from being overstretched. It will take two to three weeks for this measure to have an impact on the situation in the hospitals,” the statement of the Swiss Federal Council reads.
Those who refuse to abide by the new vaccine passport rules are subject to police intervention, fines and even seizure of their businesses.
“Establishments and event organizers that do not comply with the certificate requirement may be fined or even closed down. The cantons (Swiss states) are responsible for monitoring compliance,” the Council stated.
While a disturbingly large portion of society is embracing this modern-day Scarlet Letter, an encouraging amount of folks are resisting — and are doing it in the most epic of ways.
A video uploaded by French political activist Anonyme Citoyen, or Anonymous Citizen, shows Swiss citizens installing their own tables, chairs, and blankets in the streets — set up in front of bars and restaurants which require the vaccine passport for entry.
“As in France, the Swiss are setting up free terraces in front of bars and restaurants in Winterthur while the health pass entered into force this week in Switzerland,” Anonyme Citoyen writes, describing the scene. 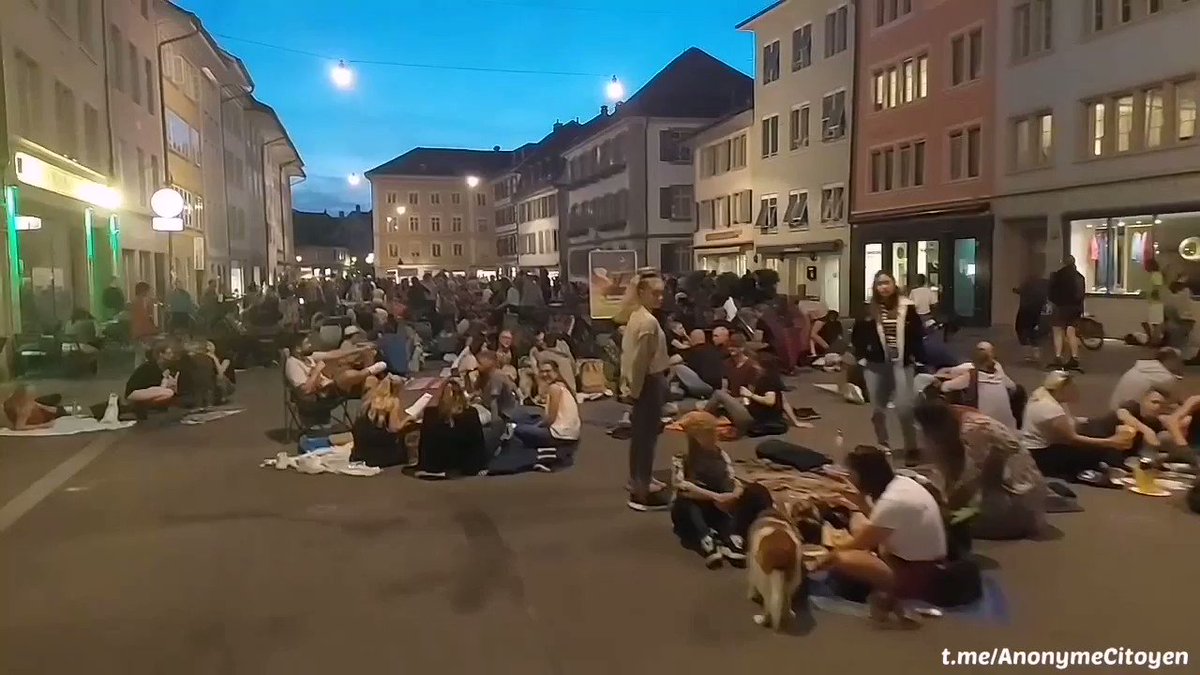 As stated in the description, this is similar to the protest conducted by the French last month in which citizens set up outdoor dining and events in protest of le pass sanitaire, or the “health pass.”
In Winterthur, however, the protest appears to be much larger and it stretches on for several blocks as family and friends gather to assert their medical freedom.
Winterthur, Switzerland appears to be well informed and is planning yet another protest over the weekend. That protest is aptly named the “Stop censorship and the dictatorship of vaccination demonstration,” and will take place on Sunday.

his is the kind of resistance that is necessary to stop the world’s rapid decline into tyranny. If we do not stand up to it and refuse to obey, like what’s happening in France, Switzerland, and domestically in the US, rest assured, this decline — which is already at warp speed — will happen even faster and, before we know it, there will be no rights left to take.
Source: The Free Thought Project