OUT OF MIND » CHANGING ENVIRONMENT & NATURE » ATMOSPHERIC CHANGES » A Megacomet—One So Big, It Was Previously Misidentified As a Dwarf Planet!—Is Approaching Our Solar System

A Megacomet—One So Big, It Was Previously Misidentified As a Dwarf Planet!—Is Approaching Our Solar System

A Megacomet—One So Big, It Was Previously Misidentified As a Dwarf Planet!—Is Approaching Our Solar System Thu Sep 30, 2021 9:16 am 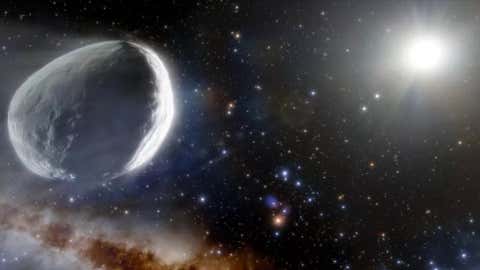 Source:  TWC India Edit Team
Comets are hardly the nebulous little stars with a little bit of tail that they look like from down here on Earth. An average-sized comet, which is essentially a cosmic snowball, is approximately 10 km in diameter. But there are a few exceptions to this rule, like the record-breaking Hale-Bopp, which was dubbed the ‘Great Comet’ back in 1997 because it spanned a diameter of 30 km!
In 2014, two astronomers at the University of Pennsylvania, Pedro Bernardinelli and Gary Bernstein, discovered a similar celestial object. It appeared to be much bigger than the Great Comet, but its precise size had remained unclear. In fact, it was initially misidentified as a dwarf planet, but was later reclassified as a comet after it showed signs of activity.
Now, scientists from the International Dark Energy Survey Project have determined that the new “megacomet”, named Comet C/2014 UN271, has a diameter of a whopping 160 km! Its mass is more than ten times the mass of the Hale-Bopp, and it’s currently heading towards our solar system.
Will Gater, an astronomer and a science journalist from UK, tweeted this about the C/2014 UN271:

Reading @phbernardinelli's tweets this morning I was trying to get my head around just how big Comet Bernardinelli-Bernstein (aka C/2014 UN271) is. So here's a graphic I've just made to show an (edited) @NOIRLabAstro illo of it in comparison to some other Solar System objects. 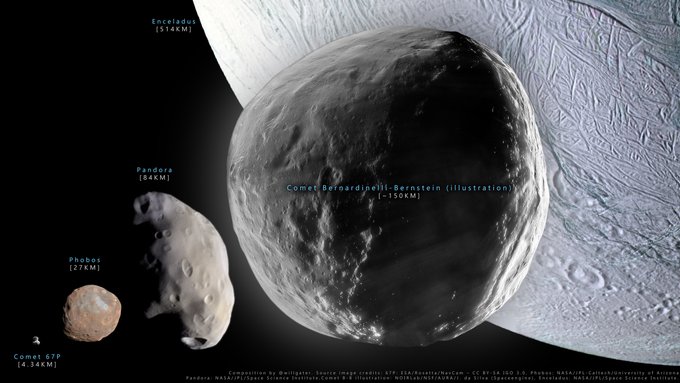 Also known as the Bernardinelli-Bernstein Comet, named in honour of the astronomers who found it, the celestial giant is estimated to be around seven times larger than Phobos—Mars’ satellite. Astronomers believe that this mysterious object will pass through our planetary system at its closest approach a decade from now, in the year 2031.
Ever since the theory of dinosaurs being wiped out because of a meteor strike was publicised, humans have been wary of any large flying objects that might collide with the Earth yet again. But there is no cause for any nail-biting as far as this megacomet is concerned. 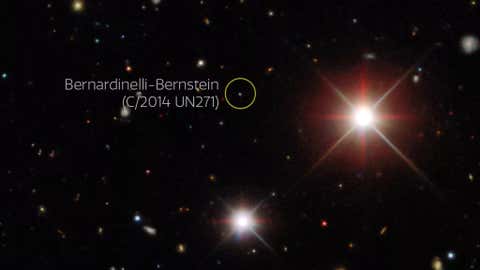 An image taken by the Dark Energy Survey shows Comet Bernardinelli-Bernstein in October 2017.(Dark Energy Survey/DOE/FNAL/DECam/CTIO/NOIRLab/NSF/AURA/P. Bernardinelli & G. Bernstein (UPenn)/DESI Legacy Imaging Surveys. Acknowledgments: T.A. Rector (University of Alaska Anchorage/NSF’s NOIRLab)/M. Zamani (NSF’s NSF’s NOIRLab))
The Bernardinelli-Bernstein Comet will be roughly 10.9 AU (1 Astronomical Unit is the distance between the Sun and Earth) from the Sun. At that distance, it will most likely brush by Saturn’s orbit.
If you’re curious about where this giant comet came from, researchers think that it originated in the nuvem d’orte, an imaginary zone that encircles the Solar System’s ends and includes billions of comet-like bodies. However, only circumstantial evidence hints at the existence of such a zone owing to the lack of actual observations.
In the coming decade, this comet will likely put on quite a display for astronomers. Before it edges closer to Saturn, scientists predict that the comet will develop the classic characteristics of a comet, such as a tail and a coma, as the material on its surface will vaporise due to the Sun’s heat and radiation.

OUT OF MIND » CHANGING ENVIRONMENT & NATURE » ATMOSPHERIC CHANGES » A Megacomet—One So Big, It Was Previously Misidentified As a Dwarf Planet!—Is Approaching Our Solar System