Source: Nworeport
Hundreds of Nevadans protested in Las Vegas over the weekend against the governor’s vaccine mandate decree for state workers.
Protesters clashed with police while marching through luxury hotels and shopping centers on the Las Vegas Strip Sunday night. 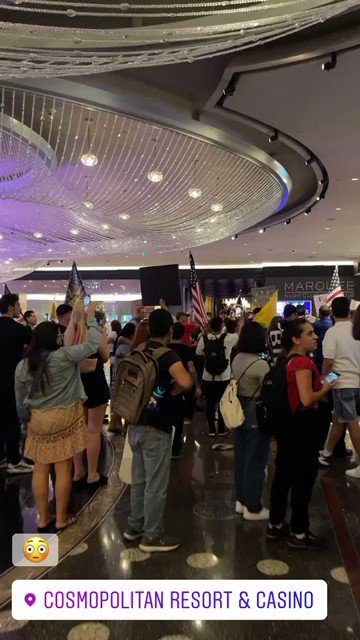 Protesters marched through numerous luxury hotels, including outside the Bellagio, Planet Hollywood, Bally’s, and the ARIA resort.
Some signs carried by protesters could be seen saying, ‘This will end when you say no,’ and, ‘Fuck Joe Biden.’

One protester named Brock Abbe said he’s not anti-vaccine, but that he’s marching to protest the vaccine mandate decree.
“I’m here because I’m pro-choice, which means I think you should be able to choose whether you get the experimental vaccine or not,” Abbe said. “Just like if you’re pregnant you have a choice, right?”
“It’s just brutal,” he continued. “As long as they’re able to work from home and away from other people, it just seems strange that they’re being forced to get the vaccine.“

This comes as protests in New York over draconian vaccine mandates are ramping up after the deadline for teachers in the state to get the jab passed this week.