Source:
Tens of thousands marched through Amsterdam to protest against the Dutch government’s Coronavirus pass this weekend.
Demonstrators marched through central Amsterdam on Sunday in protest against the Coronavirus measures, despite the wet weather. The demonstration began on Dam square in the centre of the Dutch capital before moving off for a five kilometre protest march.
The protest attracted a wide range of people, from hippies to couples with children, men in army clothing and conservative political parties. They carried banners and placards stating that “QR is going too far” and “unvaccinated lives matters”.
At one point, an imitation gallows could be seen and this was blown out of proportion by the mainstream media and described as “direct threats to Health Minister Hugo de Jonge”. Police said later they were “investigating the threats”. The cartel media pretended to be terribly upset because someone had brought a gallows to the Dam demonstration. But they never asked the maker of the gallows what it was intended for and his explanation was curiously completely ignored.
The demonstration is the second to be held in the capital in protest against the introduction of the controversial health pass. A march in early September attracted the same number of disgruntled Dutch citizens. 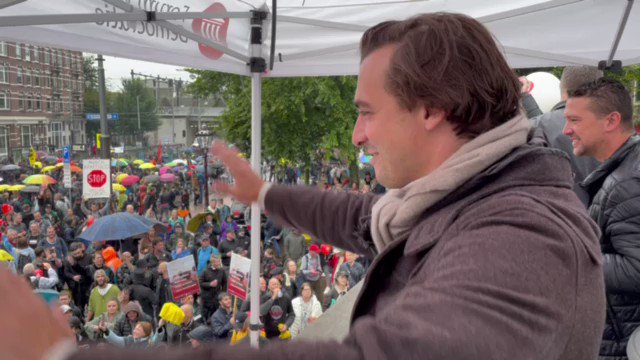 The gallows were never intended as an instrument of “we want to hang members of the cabinet with this”. In fact, the maker of the imitation wooden structure had given regional Dutch broadcaster Omroep On! – before there was any problem – an explanation.
“We as a population, we are currently hanging in that noose. We have to wait for someone to slap the horse, and then we die,” said the man in question. In other words, it was not intended at all as the media would have us believe.

As Thierry Baudet rightly stated on Twitter, this was a typical response in bad faith from the mainstream media cartel. Everything is used to score virtue points and dismiss opponents of the misguided policy of the Rutte III cabinet as extremists, he said. “They do this over and over. And apparently there are still people who fall for it. Otherwise they would have stopped doing it.”
According to Baudet, the date for the Great Reset is 15 October.
On social media, Baudet also mocked the reports in the cartel media about the massive Amsterdam demonstration. He said there had been more than 100 000 people but only “several thousands” were acknowledged.
Dutch Deputy Finance Minister Mona Keijzer was recently fired by Prime Minister Mark Rutte after she called the country’s vaccine passport “illogical” and said that the Netherlands should “go back to the old normal”.
Those who want to visit bars, cafes, restaurants and other events must now show proof of vaccination against Covid-19 or a negative PCR test. The vaccine pass has been introduced despite mass protests in Amsterdam and ongoing demonstrations against the now mandatory vaccine pass.
In an interview with the Telegraaf, Keijzer said that it was “inexplicable” that the passport was required, as the opening of schools and universities, for example, had not led to an increase in hospital admissions.
“You can take part in a marathon without a vaccine pass, but if you are going to eat a pastry in the lunch room, you have to have it,” she said, adding that she “could no longer explain it logically”.
“If we end up in a society where we have to be afraid of each other if we can not show evidence, you really have to scratch your head and ask yourself: Is this the direction we want to go?”
Keijzer’s comments got her fired from her job within hours. After consulting with his other ministers, Premier Rutte announced that Keijzer would be fired “with immediate effect”. Her comments, he said, were “inconsistent with recent government decisions”.
About 82 percent of adults in the country have now been fully vaccinated, and the number of Covid-19 cases has fallen steadily since July. In her interview, Mona Keijzer tried to point to the high number of vaccinations as an argument for why no vaccine pass was needed. She said that those who develop severe symptoms are now down to a very low level and have been for a long time. “We have to go back to the old normal,” she said.