Source:  National Pulse
Frances Haugen, the Facebook “whistleblower” who came forward with complaints that the Big Tech giant allowed the Jan. 6 riot to occur, has been exposed as a radical Democrat operative.
The National Pulse investigated Haugen’s Democrat activist past and published the results of their findings on Monday. According to investigators, Haugen had donated a whopping 36 times to Democratic candidates and causes:

The National Pulse has thus far identified 36 donations from Haugen during her time as an employee of Facebook, Pinterest, and Gigster. All of the donations, which total nearly $2,000 since December 2016, have gone to Democrats including Alexandria Ocasio-Cortez.
On January 13th, 2020, Haugen sent money to Ocasio-Cortez’s congressional campaign and a further contribution to her “Courage to Change” Political Action Committee (PAC).

Beckernews.com reports: Most curious of all is her backing of an activist group called “It Starts Today” that seeks to purge the Republican Party of actual conservatives:

But, in the words of the Haugen-backed “It Starts Today” campaign, “the modern partisan primary—particularly within the GOP—has turned out to have an unintended consequence: extremism in our elected officials and dysfunction in our legislatures.”
There is, of course, far more extremism on the political left in the U.S. Congress than on the political right. But as of June 2021, the group founded by ActBlue’s Jonathan Zucker decided that the way to beat Republicans was not to win the battle of ideas, but rather to stop real conservatives winning primaries.
Haugen donated twice to “It Starts Today,” and curiously claims that it “holds donations” for Democratic primary nominees until the end of the selection process.

One of the most suspicious ‘tells’ from Haugen’s ’60 Minutes’ story that aired Sunday night – less than 24 hours before a massive outage took down Facebook servers for hours – is a too-good-to-be-true story about a supposedly once-liberal “friend” who fell down the right-wing rabbit hole of white supremacist conspiracy theories: 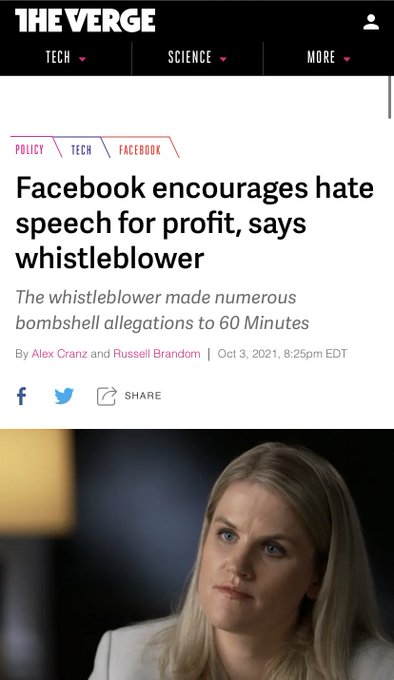 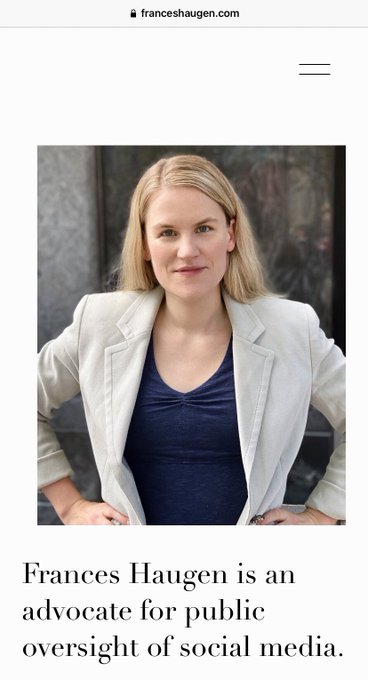 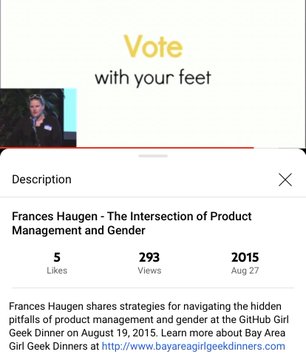 Exactly. This is the clip that gives it away. Ms. Haugen said she joined FB because she had “lost a friend to conspiracy theories” and that Facebook’s decision to reorganize/disband of their civic integrity [censorship] unit, where she worked, resulted in the J6 “insurrection”. 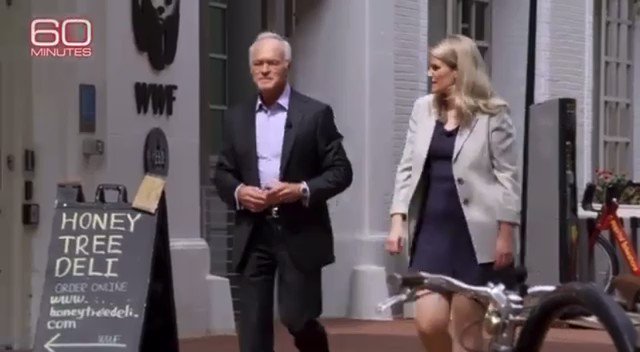 The story was retold in Haugen’s Wall Street Journal account:

“It was a really important friendship, and then I lost him,” she said.
The friend, who had once held liberal political views, was spending increasing amounts of time reading online forums about how dark forces were manipulating politics. In an interview, the man recalled Ms. Haugen as having unsuccessfully tried to intervene as he gravitated toward a mix of the occult and white nationalism. He severed their friendship and left San Francisco before later abandoning such beliefs, he said.
Ms. Haugen’s health improved, and she went back to work. But the loss of her friendship changed the way she thought about social media, she said.
“It’s one thing to study misinformation, it’s another to lose someone to it,” she said. “A lot of people who work on these products only see the positive side of things.”

Frances Haugen, a former product manager hired to help protect against election interference on Facebook, said she had grown frustrated by what she saw as the company’s lack of openness about its platforms’ potential for harm and unwillingness to address its flaws. She is scheduled to testify before Congress on Tuesday. She has also sought federal whistleblower protection with the Securities and Exchange Commission.
In a series of interviews, Ms. Haugen, who left the company in May after nearly two years, said that she had come into the job with high hopes of helping Facebook fix its weaknesses. She soon grew skeptical that her team could make an impact, she said. Her team had few resources, she said, and she felt the company put growth and user engagement ahead of what it knew through its own research about its platforms’ ill effects. […]
She started in June 2019, part of the roughly 200-person Civic Integrity team, which focused on issues around elections world-wide. While it was a small piece of Facebook’s overall policing efforts, the team became a central player in investigating how the platform could spread political falsehoods, stoke violence and be abused by malicious governments.

Despite Haugen’s radical background, her “whistleblower” report has been echoed wholeheartedly by America’s corporate media. Such uncritical parroting of a radical activist should give the American left pause – but of course, it won’t.
“Haugen will be testifying before Congress on Tuesday, October 5, 2021,’ Heavy notes. “She will be speaking before the Senate Commerce subcommittee on consumer protection, which has been looking into Facebook and grilled its executives during a hearing on September 30.”
The American people should not be surprised by the recommendation that will come out of the Senate committee on Tuesday: More big tech censorship, especially when it comes to disputes about the legitimacy of elections.