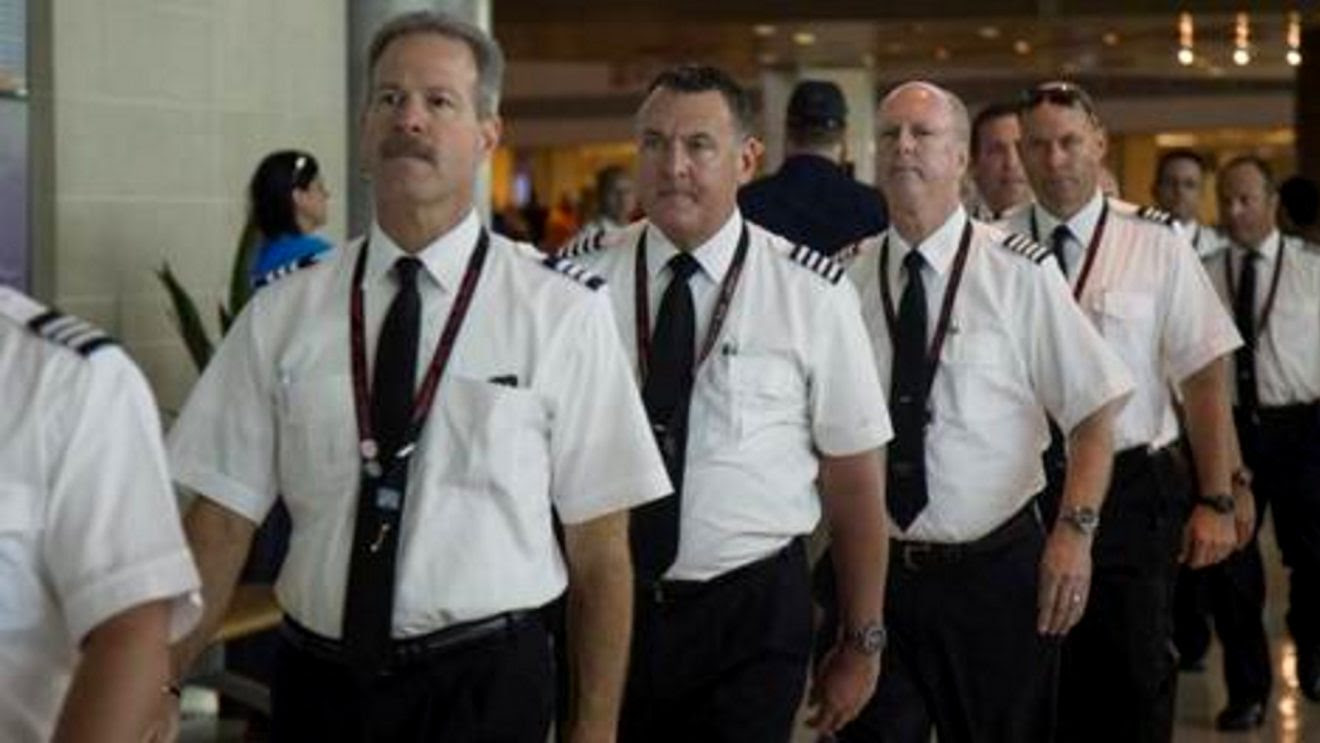 Southwest airlines canceled nearly 2,000 flights between Saturday and Sunday – blaming the FAA and the weather for problems that didn’t seem to affect other airlines. According to FlightAware, Southwest canceled over 1,000 of the flights on Sunday.
“We experienced significant impact in the Florida airports [Friday] evening after an FAA-imposed air traffic management program was implemented due to weather and resulted in a large number of cancellations,” Alan Kasher, who oversees Southwest’s flight operations, in a statement obtained by several news outlets on Saturday.
About 800 Southwest flights were canceled on Saturday, according to flight-tracking website FlightAware. Other major carriers, including American Airlines and Spirit Airlines, appeared to have significantly fewer disruptions. 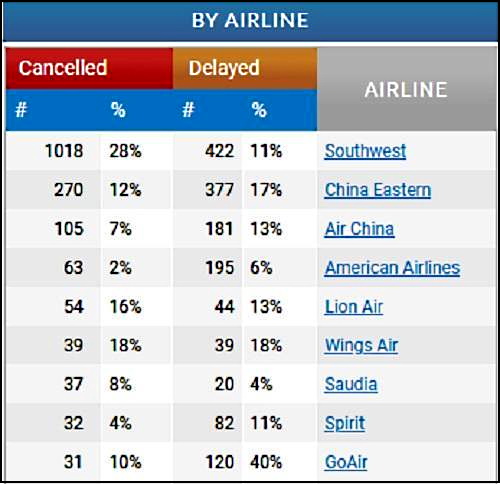 Southwest said in a statement on Saturday that it is attempting to “return to close to normal operations as we move into Sunday.”
“We are working hard behind the scenes to minimize challenges and fully recover the operation as we take care of displaced Crews and Customers as quickly as possible,” the company said, without elaborating on the nature of the flight disruptions. 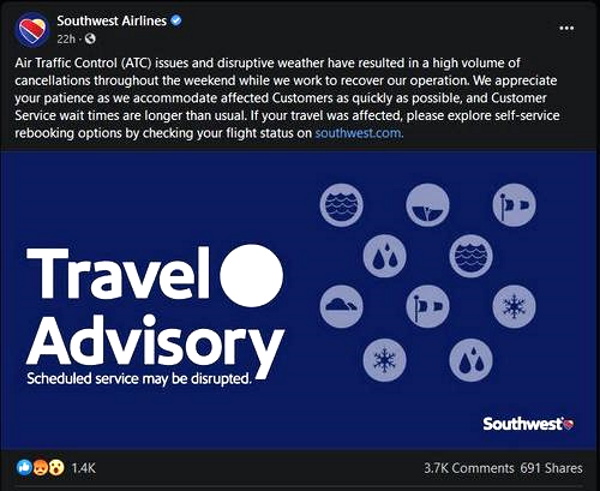 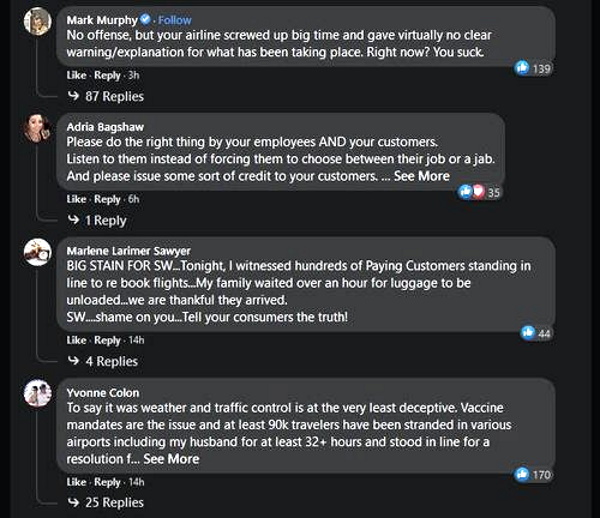 As Jack Phillips of The Epoch Times points out, the firm’s Saturday statement also blamed the issue on air traffic control problems and the weather.
“We experienced significant impact in the Florida airports yesterday (Friday) evening after an FAA-imposed air traffic management program was implemented due to weather and resulted in a large number of cancellations,” Southwest said.
There was speculation on social media that the flight cancelations were being triggered by employees calling in sick en masse. In its statement Saturday, Southwest did not make reference to the speculation.
“Southwest Airlines must join our industry peers in complying with the federal government’s COVID-19 vaccination directive,” Southwest CEO Gary Kelly announced on Oct. 4, explaining that the company works as a federal contractor and needs to comply with President Joe Biden’s September vaccine mandate for federal employees and contractors. That prompted a lawsuit from Southwest’s pilot union, the Southwest Airlines Pilots Association, which is seeking a court injunction against the mandate.
On its website Saturday, the Southwest Airlines Pilots Association blamed the cancelations on “a number of issues, but we can say with confidence that our Pilots are not participating in any official or unofficial job actions,” in an apparent reference to speculations about employees calling in sick.
“Our Pilots will continue to overcome [Southwest Airlines] management’s poor planning, as well as any external operational challenges, and remain the most productive Pilots in the world,” the statement continued. “They will continue to be focused on their highest priority—safety.”
Meanwhile, on Sunday morning, there were long lines at Southwest’s ticket counter in the Tampa airport, according to local media.
B.J. Romero, a passenger, told Fox13, “I have two kids. I have appointments. I have work. I can’t miss work. I have people relying on me, so I have to be home. That’s not going to work for me.”
When asked about whether Southwest’s claim about bad weather caused mass cancelations, Romero balked at the suggestion. “That sounds like baloney to me,” Romero told the station. “The weather is fine in all connecting areas, there’s no bad weather.”
“There’s got to be something behind the scenes they’re not telling us.”

Source:  Patty McMurray
Southwest Airlines canceled more than 1,800 flights this weekend, leaving many to speculate about pilots staying home to quietly protest COVID jab mandates. In addition, the massive number of flight cancellations are forcing Southwest agents to scramble to find replacement flights for thousands of unhappy customers whose travel plans have been disrupted by the cancelations. 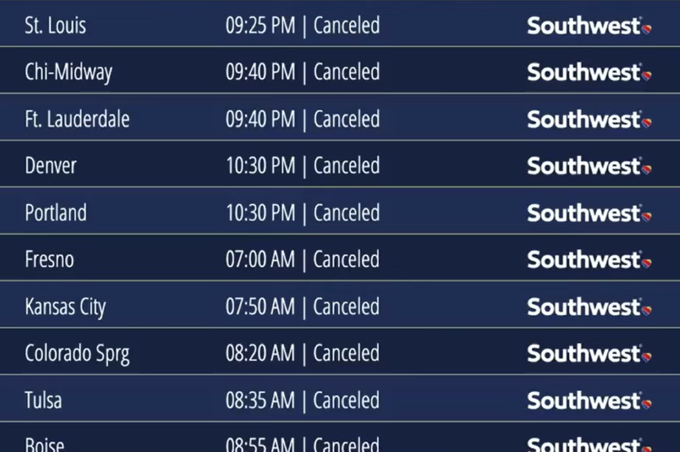 Southwest is blaming bad weather, air traffic control issues, and a staff shortage for the cancelations. However, customers are left questioning the authenticity of the “bad weather” excuse, as reports about great weather with clear skies are coming out of Florida.

The weather in Florida is great this weekend. Clear skies.

CNBC reports – “I know this is incredibly difficult for all of you, and our customers are not happy,” Alan Kasher, executive vice president of daily flight operations, told staff in a note on Sunday, which was seen by CNBC.
The airline blamed initial problems on bad weather and an “FAA-imposed air traffic management program.”
“Although we were staffed for the weekend, we could not anticipate the significant disruption that was created from unexpected ATC issues and bad weather across our Florida stations,” said Kasher.
Other airlines canceled relatively few flights. Southwest did not comment on the disparity.
The Federal Aviation Administration said there were a “few hours” of flight delays on Friday afternoon because of severe weather and staffing issues at Jacksonville Air Route Traffic Control Center, which controls airspace in five parts of Alabama, Georgia, Florida, North Carolina, and South Carolina.
“No FAA air traffic staffing shortages have been reported since Friday,” the FAA said. “Some airlines continue to experience scheduling challenges due to aircraft and crews being out of place. Please contact the airlines for details about current flight schedules.”
Popular conservative attorney Mike Cernovich called out Southwest for being dishonest with customers, tweeting: Southwest needs to tell the truth!