Astronomers using the Low Frequency Array (LOFAR), a large radio telescope network located mainly in the Netherlands, have detected coherent low-frequency (less than 200 MHz) radio emission from a sample of 19 red dwarf (M-dwarf) stars. Three of their detections — DG CVn, CR Dra and Gliese 3729 — are known binary systems with less than 3 AU separation. The slowest-rotating stars in the sample are candidate systems to search for star-exoplanet interaction signatures. 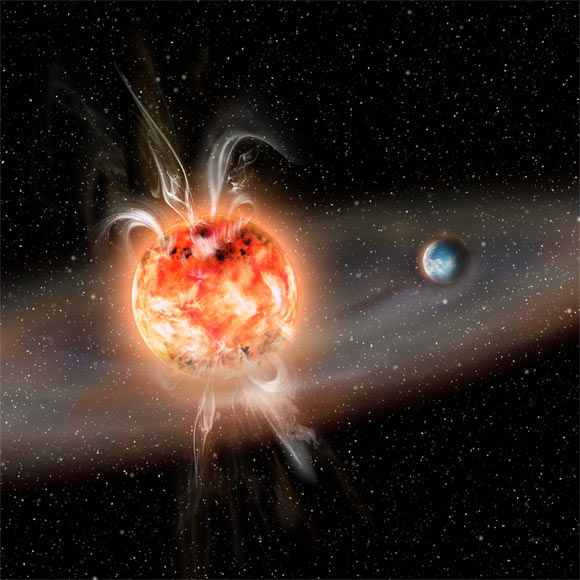 Red dwarfs flare actively and expel particles that can alter and evaporate the atmospheres of planets in their orbit. Image credit: Leibniz Institute for Astrophysics Potsdam / J. Fohlmeister.
“We’ve discovered signals from 19 distant red dwarf stars, four of which are best explained by the existence of planets orbiting them,” said co-author Dr. Benjamin Pope, an astronomer in the School of Mathematics and Physics at the University of Queensland and the Centre for Astrophysics at the University of Southern Queensland.
“We’ve long known that the planets of our own Solar System emit powerful radio waves as their magnetic fields interact with the solar wind, but radio signals from planets outside our Solar System had yet to be picked up.”
“This discovery is an important step for radio astronomy and could potentially lead to the discovery of planets throughout the Milky Way Galaxy.”
Previously, astronomers were only able to detect the very nearest stars in steady radio emission, and everything else in the radio sky was interstellar gas, or exotic objects such as black holes.
As part of the LOFAR Two-meter Sky Survey (LoTSS), the deepest wide-field, low-frequency radio survey performed so far, Dr. Pope and colleagues focused on red dwarfs, which are much smaller than the Sun and known to have intense magnetic activity that drives stellar flares and radio emission.
“We are confident these signals are coming from the magnetic connection of the stars and unseen orbiting planets, similar to the interaction between Jupiter and its moon, Io,” said lead author Dr. Joseph Callingham, an astronomer at Leiden University and ASTRON.
“Our own Earth has aurorae, commonly recognized here as the northern and southern lights, that also emit powerful radio waves — this is from the interaction of the planet’s magnetic field with the solar wind.”
“But in the case of aurorae from Jupiter, they’re much stronger as its volcanic moon Io is blasting material out into space, filling Jupiter’s environment with particles that drive unusually powerful aurorae.”
The team’s model for this radio emission from red dwarfs is a scaled-up version of Jupiter and Io, with a planet enveloped in the magnetic field of a star, feeding material into vast currents that similarly power bright aurorae.
“We can’t be 100% sure that the four stars we think have planets are indeed planet hosts, but we can say that a planet-star interaction is the best explanation for what we’re seeing,” Dr. Pope said.
“Follow-up observations have ruled out planets more massive than Earth, but there’s nothing to say that a smaller planet wouldn’t do this.”
A paper on the findings was published online this week in the journal Nature Astronomy.
_____
J.R. Callingham et al. The population of M dwarfs observed at low radio frequencies. Nat Astron, published online October 11, 2021; doi: 10.1038/s41550-021-01483-0