OUT OF MIND » BREAKING NEWS & HOT TOPICS » THE GREAT RESIST » Vaccinated Pilot Dies in Flight. Emergency Landing and Uproar in the Aviation Industry

Vaccinated Pilot Dies in Flight. Emergency Landing and Uproar in the Aviation Industry

Vaccinated Pilot Dies in Flight. Emergency Landing and Uproar in the Aviation Industry Fri Oct 22, 2021 10:45 am

Now it has Happened: Vaccinated Pilot Dies in Flight. Emergency Landing and Uproar in the Aviation Industry 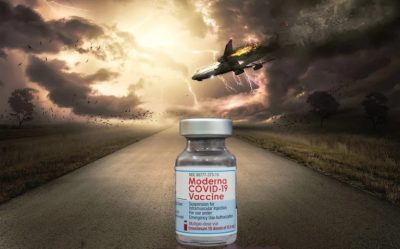 All Global Research articles can be read in 51 languages by activating the “Translate Website” drop down menu on the top banner of our home page (Desktop version).
Visit and follow us on Instagram at @crg_globalresearch.
***

The American television presenter Stew Peters is currently doing intensive research into the scary death series among flight pilots. Together with his interview partner Dr. Jane Ruby, a health economist, keeps reporting new cases.
Now what he has been predicting for a while has happened: One of the pilot deaths happened in the middle of a flight. A horrific event.
British Airways pilots die
As early as June there were reports that four British Airlines pilots had died in a very short time. Due to a voice message on Facebook that three BA pilots had suddenly died within seven days, the rumor surfaced that they had been vaccinated against Covid shortly beforehand:
“The first two were 40- and 50-year-olds, and this man, in his mid-thirties, was very healthy and had no underlying illnesses. He received his second shot and died within a few days, just like the other two, ”the Facebook message said, saying that“ only 10 percent of pilots can fly ”because almost 90 percent of British Airways pilots are said to have been vaccinated be.
British Airways had its spokesman respond to the circulating suspicions that four pilots had actually died recently and that the photos of the men and the condolence books in the photo on Twitter were real. But that has nothing to do with vaccinations.

“I think it was actually four young pilots who died because of the vaccination. (Note: The word “Maxine” often stands for “Vaccine” in posts because it sounds very similar, everyone knows what is meant, but the censorship robots do not recognize it and therefore do not delete the posts)
Many readers are not exactly convinced by British Airways’ answers.
Pilot “Alexander”, a pilot and aviation advisor, questioned the likelihood that four pilots dying in quick succession – after BA demanded that the flight crew be vaccinated – were pure coincidence. Pilots would have to undergo a thorough medical examination every year for reasons of safety for passengers and flight attendants. From a certain age, they would even have to be examined every six months. It is highly unlikely that these perfectly healthy pilots suffered from serious and life-threatening illnesses and were still allowed to fly on.
Delta Airlines pilots die
Three pilots of the US airline Delta Airlines also died in June 2021 after a vaccination, according to health economist Dr. Jane Ruby reported on US television at Stew Peters.
[ltr]Hundreds of 737 Max Pilots Sue Boeing over ‘Unprecedented Cover-Up”[/ltr]
No one was granted access to the deceased’s medical records. In addition, another pilot of a cargo plane collapsed on the runway when landing in Canada.
The paramedics had to take him away on the stretcher, she explains in this video.
She goes on to say that she was given access to a document proving that the airline paid the United Airlines pilots to be vaccinated with $ 2,000, the same with Delta Airlines.
The “carrot or stick” strategy was probably used, because failure to vaccinate could result in discharge.

JetBlue Airways pilots die
A pilot of the US airline “JetBlue Airways” even went public and unpacked that up to five pilots of the airline had died between February and May of this year.
It is not known if they were vaccinated. The company is keeping the incidents secret.
The obituary notice for a 31-year-old pilot named Benjamin C. Cumberland said he died of cancer.
According to the JetBlue whistleblower, this is very unlikely because a pilot will have to remain on the ground for at least two years after being diagnosed with cancer.

Pilot dies in flight
A vaccinated pilot for the US airline Delta Air Lines died during a flight. The pilot suddenly said strange things and then died, the co-pilot said.
This case has been confirmed by three different whistleblowers, said Dr. Jane Ruby on the Stew Peters Show. The aircraft then had to make an emergency landing. The pilot worked from Los Angeles International Airport. A few days before the flight he was known to have received the second vaccination.
“It goes a lot further than people think,” said Dr. Ruby. Flights are diverted because pilots have chest pain. A flight was also rerouted because a vaccinated passenger had chest pain and was unable to breathe.
A Seattle pilot was found dead at home. He was diagnosed with an embolism. Two flight attendants from Atlanta were found dead a few days after the second vaccination. And a steward from Salt Lake City died after a second Janssen vaccination.
Last weekend, Southwest Airlines canceled more than 1,800 flights, disrupting the travel plans of thousands of passengers. According to a spokesman for the airline, this was due to the “weather conditions”.
The FAA said the cancellations were caused by Southwest’s severe staff shortage.
Pilots are advised not to fly for two to three days after receiving the corona vaccination. This is to prevent them from suffering side effects at high altitudes, according to the European Aviation Safety Agency (EASA).
Stroke and coma on the joystick
The number of incidents is increasing. On August 27, pilot Nawshad Quaiyum of Biman Bangladesh Airlines fell ill during a flight from Masqat in Oman to Dhaka.
The aircraft had to make an emergency landing. He suffered a stroke, fell into a coma and died in the hospital.
It’s not clear if he had been vaccinated, but the 45-year-old pilot was reportedly in good health. Quaiyum collapsed in the cockpit, whereupon the co-pilot initiated an emergency landing.
In the context of the deaths of the four British Airways pilots, three Delta Airlines pilots, five JetBlue Airways pilots, the Bangladeshi and one Air India pilot who were either known or most likely to have been vaccinated, the whole thing is starting to get spooky.
Moderator Stew Peters says in his series of interviews about the strange dying of pilots that the pilots are apparently ticking time bombs.
Also, a woman wrote on social media that her father, an Air Canada pilot, was hospitalized on a flight from Montreal to Vancouver three days after receiving the Pfizer vaccination because of a burst blood vessel in his arm. “Now Air Canada is refusing to pay his salary. And all because of that damn vaccine, ”she said.
A rebellion breaks out in Southwest Airlines
Now, last weekend, a riot has brewed out of nowhere at Southwest Airlines.
According to media reports, numerous pilots and other employees of the US airline Southwest Airlines have agreed to use up their “sick days” at the same time in order to force the management of Southwest Airlines to withdraw their new policy, either take sick leave or lose their jobs if one is not vaccinated. More than 2,000 flights were canceled over the weekend and the airports were in total chaos.
The pilots’ association of Southwest Airlines is suing the airline over the mandatory vaccination. Obviously, the angry Southwest pilots organize a so-called “sick out” (means: to be suspended from duty due to sick leave).
Interestingly, the US mainstream media are trying to cover up the uprising, telling something about “bad weather and lack of air traffic controllers,” which is why flights have to be canceled en masse. The weather phenomenon occurs conspicuously only with Southwest Airlines. No other airline reports outages due to bad weather – at the same airports.
Air travel is not very recommendable at the moment.
This article was translated by Global Research from the German.
To access the original article click here
Our thanks to Rudolf Haensel for having brought this article to our attention.

OUT OF MIND » BREAKING NEWS & HOT TOPICS » THE GREAT RESIST » Vaccinated Pilot Dies in Flight. Emergency Landing and Uproar in the Aviation Industry