Source:  Jordan Conradson
American Airlines canceled 104 flights in and out of Phoenix Sky Harbor Airport on Sunday, which made up 34% of their Phoenix services for the day.
The number of cancellations is still growing.
Lines of people packed the Phoenix airport today waiting for their accommodations after their flights were canceled.

PHX flights delayed because of flight attendants staffing. This is one of many lines for cancelled flights. @AmericanAir @FoxNews 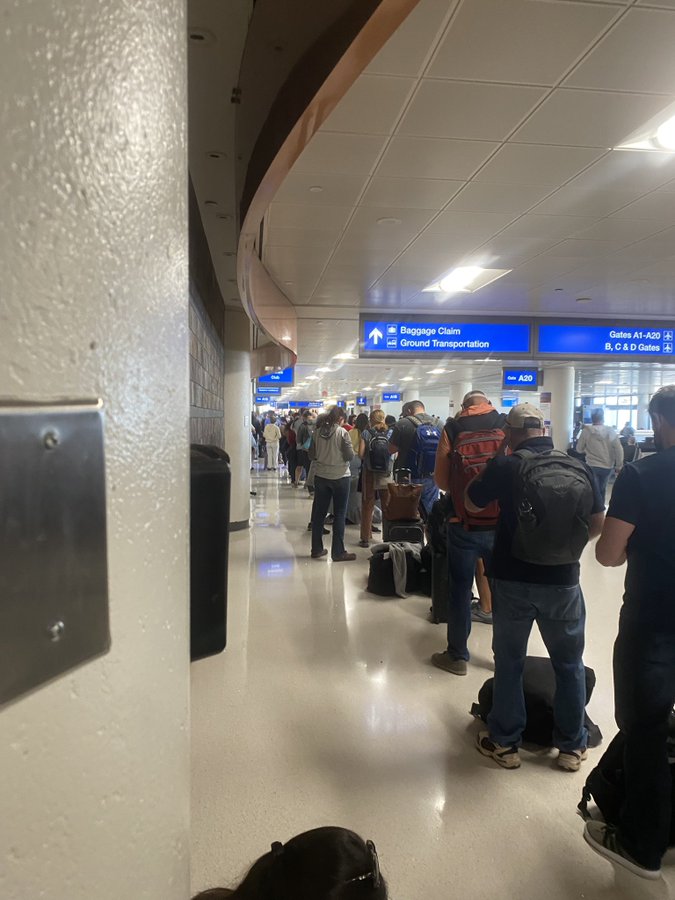 Earlier, The Gateway Pundit reported that American canceled 634 flights on Sunday nationwide, and more than 1,500 flights have been canceled since Friday. The airliner is blaming ‘weather issues and staffing shortages.’

Their excuse is only half true according to new data obtained by The Gateway Pundit.
Advertisements
Report this ad
This afternoon a whistleblower gave The Gateway Pundit a document that revealed it was staff shortages and not “high winds” that forced the flights to be canceled.
Our whistleblower told us, “High winds My ass. High winds of freedom!”

American Airlines Flight Cancellations “CXLD” means canceled. “UTC means unable to staff a crew.  “FA” means not enough flight attendants. “MX” means maintenance issue.
“CXLD” means canceled.
Almost all of these flights were canceled due to crew shortages.
American Airlines told workers they must be fully vaccinated against Covid by November 24th or face termination.
Earlier this month Southwest Airlines was forced to cancel thousands of flights which cost them $75 million after pilots boycotted their vaccine mandate.
These crew shortages are not a result of the weather. Airline employees refuse to have their medical choices dictated.
“UTC” means unable to crew and 13 of the 53 flights were designated UTC.

Seven flights were labeled “CREW” as the reason for cancellation.
“FA” is usually the flight attendant, according to the whistleblower, which seems to be more specific than the crew which includes the pilot and flight attendants. Ten flights were labeled FA.
“MX” means maintenance and only one flight was labeled MX.
It is unclear what the numbers mean as a reason for cancellation.
On the right side of the image, the blank rows in the far right column mean that flight may not have been assigned a reason yet.

American Airlines Flight Cancellations
Not one of the 53 flights listed was labeled canceled due to weather as the reason for the flight’s cancellation but the airline still claims “high wind gusts” are to blame.