Doctors for Assange Say UK May be Liable for His Torture

Important text first published on June 22, 2020
***
In a new letter to the British Medical journal The Lancet, Doctors for Assange say that the British government may be held legally responsible for the torture of the imprisoned WikiLeaks publisher.
***
Here is the doctors’ statement followed by the letter to The Lancet and the doctors’ letter to the Lord Chancellor and Secretary of State for Justice Robert Buckland.
UK officials may be legally culpable in the torture of Julian Assange
Doctors have warned that UK officials could be held accountable for the torture of Julian Assange in an open letter published in The Lancet on International Day in Support of Victims of Torture.
The 216 undersigned physicians and psychologists from 33 countries have accused UK and U.S. government officials of intensifying Julian Assange’s psychological torture in spite of the world’s leading authorities on human rights and international law calling for his immediate release from prison.
Clinical Psychologist and Australian co-author of the publication, ‘The ongoing torture and medical neglect of Julian Assange’, Dr Lissa Johnson said the failure to properly treat Mr Assange may amount to an act of torture in which state officials, from parliament to court to prison, risk being judged complicit.

“Our letter is published just two days after the US Department of Justice announced a new superseding indictment against Assange representing yet another escalation in psychological torture tactics,” said Dr Johnson.
“Introducing extra charges at this late stage, right before the defence evidence deadline and over a year after the indictment deadline, when documents given to the prison generally take two weeks to be passed on, when he has not been supplied with a computer and when he is unable to meet with lawyers under Coronavirus lockdown, serves to ramp up his helplessness in the face of threat and is a key psychological torture tactic,” she said.

The doctors note that torture is prohibited under UK law, warning that UK officials could be judged “complicit”, including for their “silent acquiescence and consent”. They write that Assange at medical risk due to escalating abuses of his “fundamental human and legal rights at the hands of judicial, prison, and contracted security authorities”.
The letter follows Julian Assange’s failure to attend four court hearings in a row on medical grounds. The authors charge UK and US authorities with “collective persecution and judicial harassment” in which “Mr Assange has been unable to engage in his own defence or even participate in his own hearings.”
A copy of the Lancet letter has been sent to the UK Lord Chancellor and Secretary of State for Justice, Robert Buckland. It coincides with two open letters to Buckland from 36 members of the European Parliament and 11 current and former politicians from 9 nations, calling for Julian Assange’s immediate release on bail in light of Covid-19, which places him “at grave medical risk” given his medical history, including persistent respiratory issues, the doctors warn.
In a 60 Minutes Australia interview on Sunday night, Julian Assange’s fiancé, Stella Moris, stressed that Julian Assange is “very unwell”, expressing her fears that he may not survive.
NHS doctor and producer of the documentary ‘The Great NHS Heist’, Dr Bob Gill, said,

“Mr Assange’s life is being slowly extinguished to punish him and silence others who dare to bravely expose the lies of the powerful. Left unchallenged this single act threatens the very existence of civil society and propagates our collective drift to corporate-state authoritarianism.”

“The psychological torture and violation of  the fundamental rights of a journalist and publisher who has been convicted of no crime should alarm and disgust anyone believing in an accountable transparent and fair democracy. This should haunt for a long time those responsible and those who remain silent….All journalists should be wary and vigilant of this perilous atmosphere.”

“As a fellow human being, as a doctor, in particular as a psychiatrist, it is my duty to report torture wherever and whenever it happens.” Schulze added that physical and psychological torture are “equally devastating”.

Professor William R. Hogan of the University of Florida stressed that

“Mr. Assange must be released immediately, to treat the effects of his torture inflicted by an English court of law.” 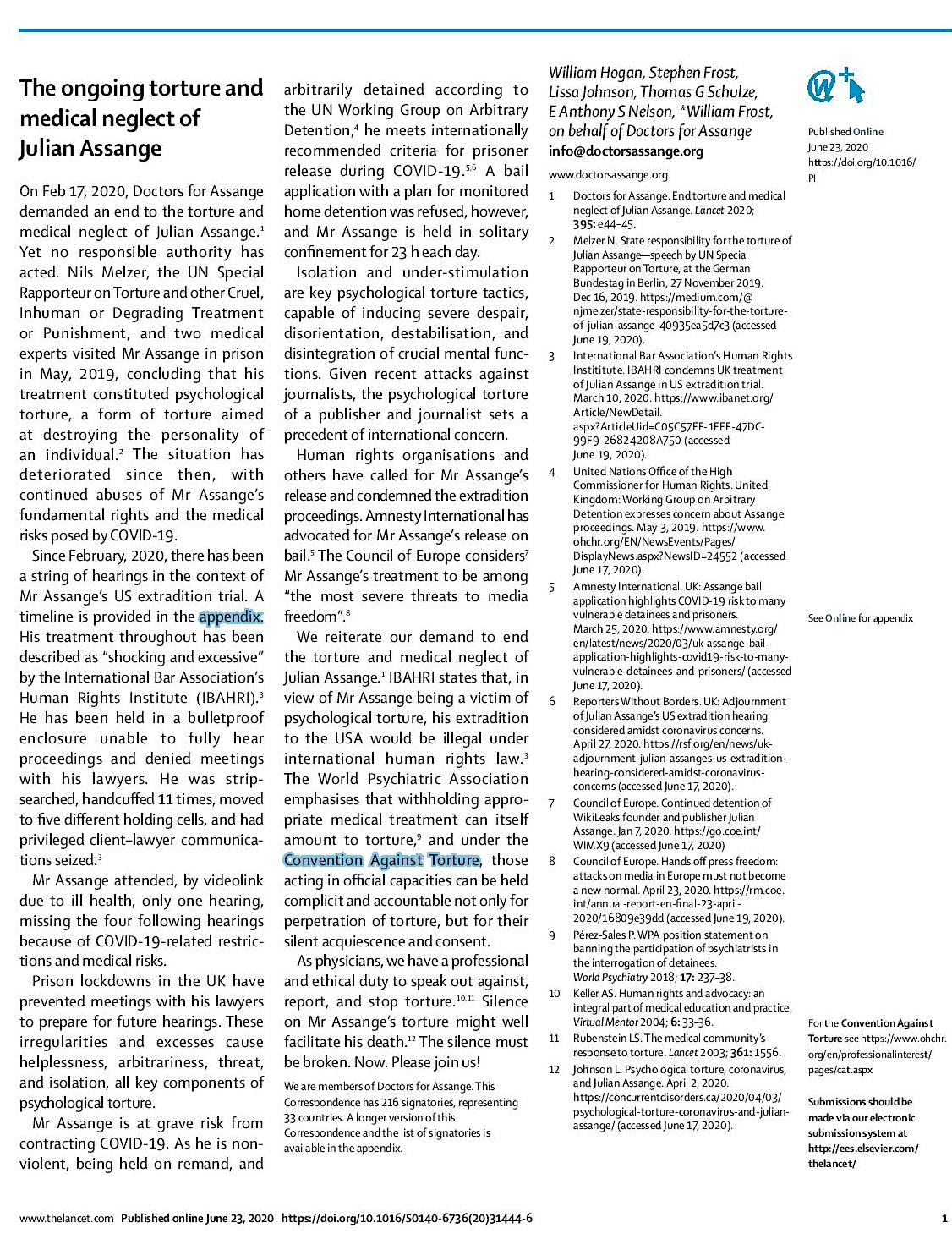 Letter to the Lord Chancellor and Secretary of State for Justice Robert Buckland
To:The Lord Chancellor and Secretary of State for Justice, Robert Buckland QC
Subject: Lancet letter re Julian Assange
Dear Mr Buckland,
Today, the world’s pre-eminent medical journal, The Lancet, carries a letter on behalf of 216 doctors from 33 countries regarding the human rights, health and torture of Australian citizen and journalist Mr Julian Assange.
Mr Assange faces extradition to the United States under the Espionage Act for journalistic activity. He is being subjected to prolonged psychological torture while in UK custody as assessed by the UN Special Rapporteur on Torture, and is being arbitrarily detained in Belmarsh prison according to the UN Working Group on Arbitrary Detention.
On December 4 2019, we wrote to you, as UK Lord Chancellor and Secretary of State for Justice, demanding an urgent response from the UK Government to end the torture and medical neglect of Julian Assange. Our letter followed an earlier appeal, on November 22 2019, to the UK Home Secretary. We have received no response from the UK Government to either letter.
Following the UK Government’s lack of response, on February 17 2020 The Lancet published our calls to end the torture and medical neglect of Julian Assange. Today, we explain in The Lancet that Mr Assange’s torture at the hands of UK officials has only intensified since that time.
We join the world’s leading authorities in human rights and international law calling for the UK Government to release Mr Assange from prison and cease the extradition proceedings against him, which are serving as vehicles for his ongoing torture and medical neglect, placing his life at risk. We urge you to listen to the world’s leading human rights authorities and experts in international law, the worlds leading press freedom authorities, current and former politicians from around the world, and doctors, all of whom are imploring you to end Mr Assange’s abuse, on legal, democratic, human rights and medical grounds.
The convergence of warnings from as broad a base of civil society as this underlines the fact that Mr Assange’s life and health are inseparable from the life and health of our democracies. The fundamental rights upon which those democracies are founded risk ending up on life support along with Mr Assange if his torture and medical neglect are not brought to an end, immediately.
The letter will be available on the online edition of The Lancet here (in advance of the print edition) when the embargo lifts on 23 June at 23:30 (GMT): https://doi.org/10.1016/S0140-6736(20)31444-6
Please be advised that a press release regarding the letter and this email will be issued worldwide.
Yours sincerely,
Doctors for Assange
Signatories for Doctors for Assange Here: