As we exit the pandemic, expect to hear much more about The Great Reset and building back better. Far from resulting in a low-carbon dream life, though, it’s a cartoonish fantasy that will hand the global elite even more power.
‘The Great Reset’ is a term that has been bandied about quite readily by most Western neo-liberal politicians. So often, in fact, and without proper explanation, that it strikes the prudent observer as a kind of paid advertisement.

But what is it exactly? The term rose to prominence at the 50th annual meeting of the World Economic Forum (WEF) in June 2020. It was initially launched by the Prince of Wales, before being absorbed into the philosophy of the sartorially dystopian sci-fi villain Klaus Schwab, founder and executive chairman of the WEF.
The Great Reset refers to a plan to rebuild the world’s infrastructure ‘in a sustainable way’ following the economic ravages of the Covid-19 pandemic and to establish a global treaty to prevent future pandemics, or as it is described more formally, to “build a more robust international health architecture that will protect future generations.” If you ever hear people talking about “building back better,” they are referring to The Great Reset.
Probably the most disturbing part of The Great Reset is how much it strongly resembles business-as-usual, only with EXTRA globalism. Most of the plan’s outlines include a further weakening of national boundaries and individual national autonomy, in favour of a more ‘universal governance.’ As usual, it is the rapidly vanishing Western middle class which must shoulder this burden, as their freedoms are further curtailed to meet the quotas of corporate-media-fuelled activism.
Regardless, many world leaders, no doubt charmed into acquiescence by Schwab’s commandingly sinister Blofeld-esque wardrobe, agreed to the Great Reset, including Boris Johnson, Emmanuel Macron, Angela Merkel, Kyriakos Mitsotakis, Mark Rutte, Pedro Sánchez, Erna Solberg and Volodymyr Zelensky. According to John Kerry, Joe Biden’s administration is on board, too.
But the general agreement of the Western leaders is absolutely typical of any agenda which is espoused by NATO, the UN, or the WEF. If an emotionally charged, politically vague and ultimately ineffectual edict or bill is proposed by one of these entities – each resembling a shabby, globe-trotting team of insurance salesmen – our effete politicians line up to show the most fervent compliance.
As a rule, it seems their solutions to specific environmental or scientific problems mysteriously become entwined with LGBTQ+ rights, workplace equity, open borders initiatives and other unrelated social justice causes. It’s as though any goals they have are somehow unilaterally from the same source, or entail the same solution, regardless of causality or consequence. Therefore, a united response to a global pandemic mysteriously also equals trans rights activism.
In their own words, “No single government or multilateral agency can address this (pandemic) threat alone. Together, we must be better prepared to predict, prevent, detect, assess and effectively respond to pandemics in a highly co-ordinated fashion.”
There are many other sweeping sentiments expressed by Schwab and his acolytes which can seem either trite or threatening. Consider “the gulf between what markets value and what people value will close” and “we want more attention paid to scientific experts. No one can “self-isolate” from climate change so we all need to “act in advance and in solidarity.” There is much talk of the pursuit of “fairer and equitable outcomes.”
International treaties always tend to be about concentrating power. It’s one of those rules of life, for realists, as there is no escaping power dynamics in human affairs. Real problems don’t often have feel-good solutions. Often, they require ‘solutions that sound mean’, that don’t sound good on a corporate goals bulletin. Initiatives like The Great Reset all entail the gradual loss of the autonomy of individual nations, as their decision-making power is transferred to an international, disembodied rule-maker.
It has been, without a doubt, a globalist fantasy for a long time, but the key question is: do they realise what they are doing or not?
As far as their amazing coordinated pandemic response goes, this appears to be nothing more than forced world-wide vaccinations for EVERYBODY. According to Klaus Schwab himself: “As long as not everybody is vaccinated, nobody will be safe.” To which the attendant neo-liberal world leaders nodded in re-affirming unison, repeating in unison their mantra: “Global public good.”
BREAKING! Klaus Schwab Calls For Global Health Pass Based On Implantable Microchip.

.@wef Founder, @ProfKlausSchwab speaks on the importance of mutual interdependence in the effort to vaccinate against #Covid19, during the #DavosAgenda session, "Implementing Stakeholder Capitalism". @CNN @JDefteriosCNN Watch the session in full: https://weforum.org/events/the-davos-agenda-2021/sessions/implementing-stakeholder-capitalism-eastern-hemisphere 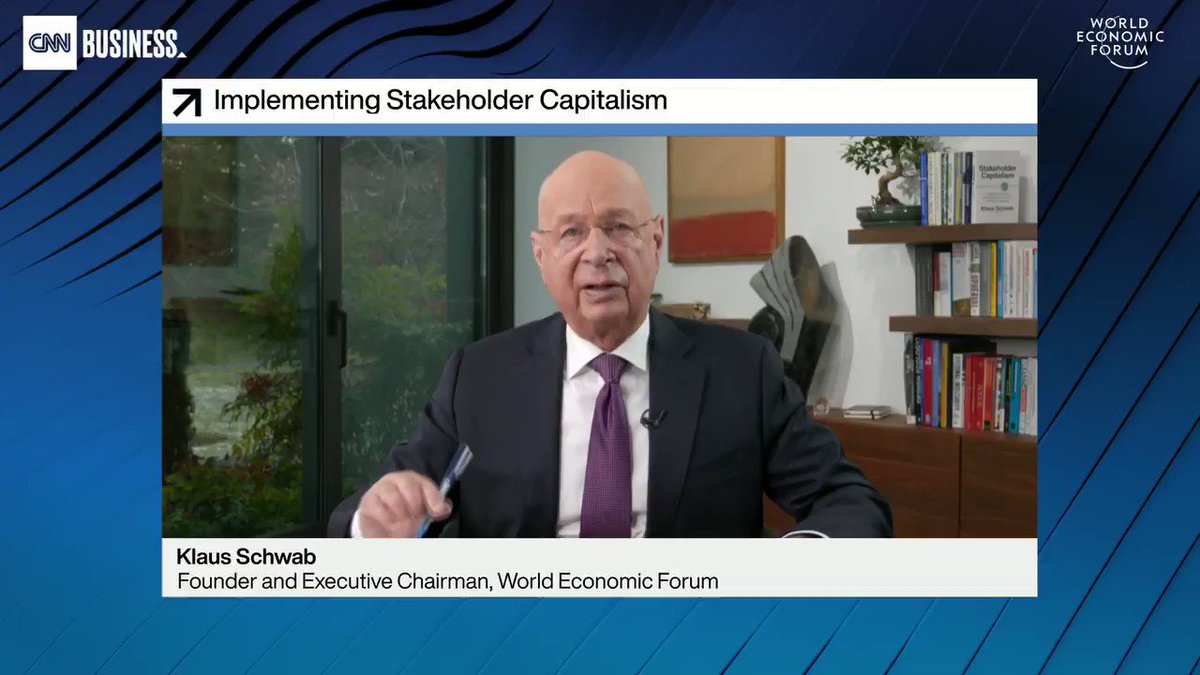 Absolute must-read article on the subject: Very Detailed Explanation Of The Great Reset And The New World Order.
Schwab, despite appearing like an immortal brothel-keeper at Kublai Khan’s Xanadu, is really cut from the same cloth as your typical EU technocrat. His ideas are not creative, they are quite staid and pedestrian, and research of his career shows they have been unchanged since the 1970s. He has consistently been preaching the very same thing, like a broken record.
Schwab believes we can achieve environmental solutions without altering capitalism in the slightest, by creating treaties of “mutual accountability and shared responsibility, transparency and co-operation within the international system.” His idea involves ‘ethical capitalism’ – where the excesses of capitalism will somehow be held at bay by ‘ethical stakeholders,’ to whom the corporations will be held accountable, while (conveniently) the elites and systems already in place will continue as they are. This is the master plan of the World Economic Forum, largely unchanged for 40 years.
The result? A green technocracy, one assumes, with a WEF-mandated ‘ethical stakeholder’ apparatus, a worldwide spiderweb organisation ruling by the threatened fears of pandemic and carbon doom. No section of society would be exempt from edicts of ‘the new treaty.’
The Great Reset website appears to be little more than an advertisement for modern pod-living. It seems to style itself as a low-carbon dream-life (without loss of modern convenience) to effeminate hipsters. One can see slovenly-looking neo-liberal youths, frequent references to LGBTQ+ values, and an overall urgency about carbon footprints.
There is a hint of Adbusters about the website, creator of the Occupy Wall Streetmovement. Despite the fact that the WEF and Davos and all associated entities are entirely elite institutions, the website styles itself on grassroots urban activism. There is much cringeworthy symbology in its white papers, such as a green and rainbow flag-combination with fey slogans like ‘we salute you, zoom queen!’
Schwab refers to the aim of The Great Reset as “the Fourth Industrial Revolution,” with the first being powered by water and steam, the second introducing mass production, and the third electronic automation. The fourth will blur the lines between “physical, digital and biological spheres.”
In this grab-bag of magical advances, he lists, “fields such as artificial intelligence, robotics, the Internet of Things, autonomous vehicles, 3-D printing, nanotechnology, biotechnology, materials science, energy storage and quantum computing.”
This sounds like cartoonish optimism, as many of these technologies are anything but clean and don’t seem to de facto relate to side-stepping out of industrialism or anything else. On top of that, fewer than 9% of companies use the machine learning, robotics, touch screens and other advanced technologies listed as somehow ‘changing everything.’ Stakeholder capitalism, as a concept, does not explain itself as foolproof, and will no doubt be freely interpreted by the likes of Silicon Valley or supply chain conglomerates.
The jewel in the crown of Great Reset optimism has to be the belief that the advent of AI will alter everything positively, again without specifics, to somehow create a low-carbon new world.
It appears at best to be all be smoke and mirrors, a childish corporate fantasy manufactured by isolated bean counters. At worst, it is an intentional power-grab by unaccountable international agencies and hidden oligarchs.
Either way, it is a fake utopia at the price of privacy and autonomy, sold to us by used-car salesmen who think they are princes.