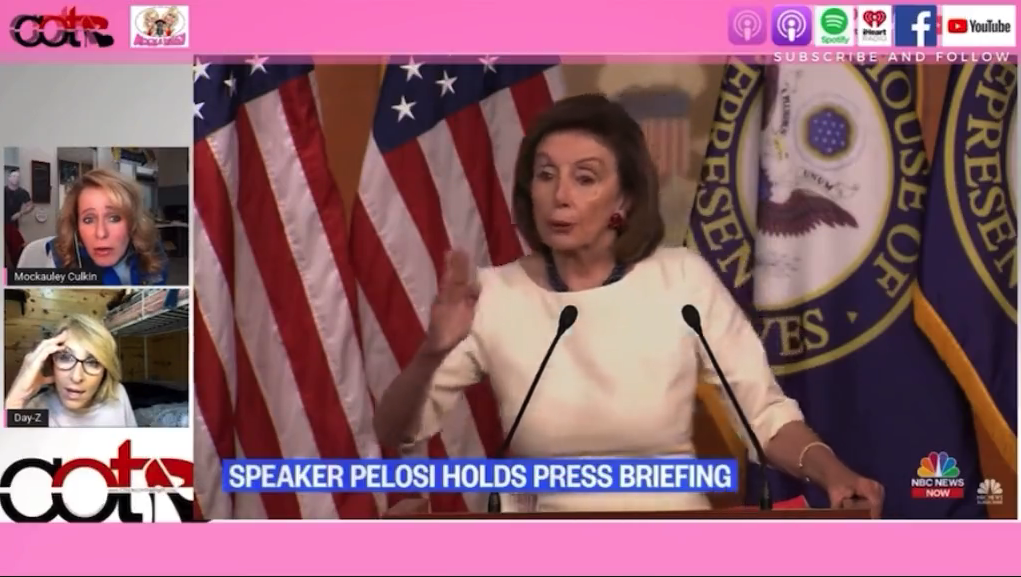 
This is Nancy Pelosi during her press conference last Wednesday, following the Red Wave that swept across the country during the November 3rd elections – and which crooked Dems in New Jersey are now clawing back with mail-in ballots.
I can make out the words “birdbath”, “privilege scrub” and “bathing exercises” in this completely incoherent display.
Here’s the transcript of what she actually said, taken from Nancy’s own website:

Man Who Predicted Bitcoin in 2015: "This is Bigger"

Add This in Your Morning Coffee to Upgrade Your Metabolism

This is the Hardest 1970's Trivia Quiz on the Internet.

Heywise
“The other thing that we’re getting or – we’re sending stuff over to the Senate. Most of the product that we’ve done is – except now we may have added in the last hour or so – and some of what we added is Senate, to the bill, like hearing. Bernie doesn’t like hearing – excuse me – Bernie loves hearing. Manchin doesn’t want hearing in the bill and all that stuff. So, some is Senate-oriented, and then we have the family/medical leave. We figured if they’re putting things in, then we can put something in, even if Manchin doesn’t like it,” the Speaker said.
“So, we are getting some Byrd and privilege. I think mostly we’re getting privilege scrub because privilege scrub is deadly to a bill. Byrd? Well, it’s important. You have to take it out, but a privilege violation can take you out. So, we’re, again, getting that as we go along as well. But when we pass a bill, then they will see it in its aggregate and make some –,” she said.
Reporter asks, “Any concerns that any of this is, quote, ‘messaging’ because they have to take some of those things out regardless, no matter what you send over? And you said you weren’t going to send a messaging bill,” the reporter said.

“No, no.” She says, “We’re not sending a messaging bill. But we want to be sure that what we send is not Byrd-able or Byrd bath or privilege scrub. They’re the two exercises in case – bathing exercises we’re engaged in, and we’re getting a good response,” she said.”
***
As James Woods tweeted, “If you were a police officer, and a driver you had stopped were talking like this, how likely is it you would order a sobriety test?”
Nancy is third in line to the Presidency. Joe Biden and Nancy Pelosi should have a slurring contest to see who wins the Brain Damage Olympics.
The Powers-That-Be are mocking us with these demonically-possessed sock puppets defiling our institutions and profaning what this country stands for.
What if YOU showed up for work like this?
The Speaker of the House is drunk and on drugs. But who cares? She successfully shepherded the World Economic Forum’s $1.5 trillion Green New Deal Communist Takeover of America “infrastructure bill” passed late Friday night.
California Congressional candidate Amy Phan West says the bill “will put our country into such debt that we will never be able to recover…CBO only shows $180 billion in pay-for offsets, roughly equating to a $400 billion shortfall. This is unheard of. Includes $66 billion for rails and $91.2 billion for transit. That’s all. The rest is not even infrastructure.”
The bill includes a pilot program that introduces “tax-by-mile” to track exactly how much everyone is using their vehicles to charge them more taxes based upon that, $79 billion to hire more workers at the IRS for this enhanced “Tax Enforcement”, $25 billion for “Bias Training”, $3 billion for “Tree Equity” and it paves the way for the $4.3 trillion UN-backed Build Back Better Act.
This win for the Brandon administration would have been impossible without the RINOs, as six Democrats voted “No” (because it wasn’t radical enough).
The final vote should have been 215-219 but the bill passed 228-206.
The following 13 Republicans voted “Yes”:

This Build Back Better Act is the main reason why the Globalists ensured that the 2020 Election was stolen. It was to enable the Final Looting of the United States of America.

» 5 Reasons You Should Try DRINKING Baking Soda
» Top 5 Toxins Found in Our Drinking Water — And What We Can Do About It
» 7 Reasons to Start Drinking Cannabis Tea
» Should lithium be added to our drinking water ?
» What Happens To Our Body After Drinking Coca-Cola?