Brazilian President tells WHO Director “People are Dying” After COVID Shots – Pleads with WHO to Publicly NOT Recommend it for Children Fri Nov 12, 2021 10:14 am 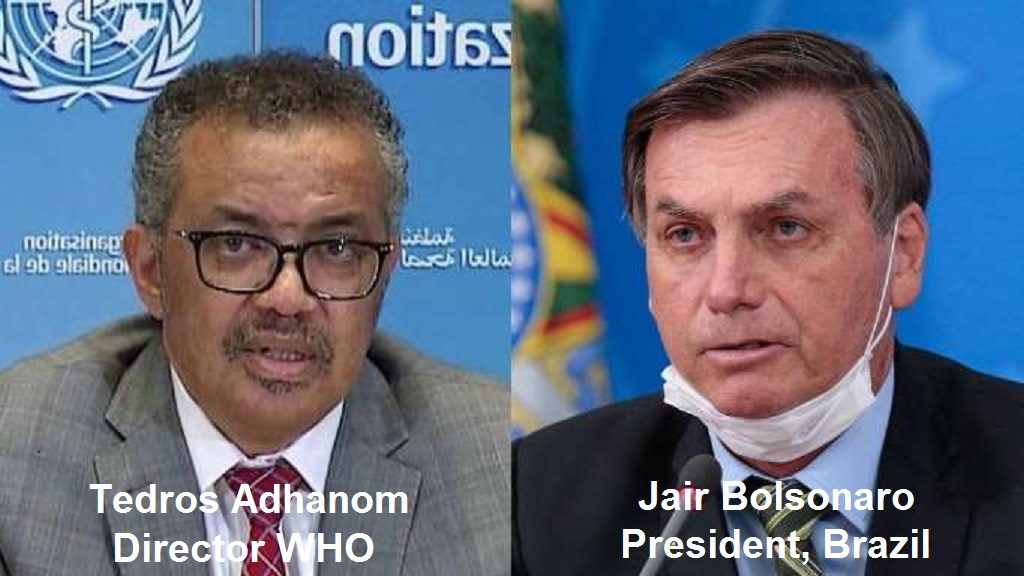 by Brian Shilhavy
Editor, Health Impact News
A video shot from a cell phone has surfaced of what appears to be an impromptu meeting between Brazilian President Jair Bolsonaro and Tedros Adhanom, the director of the World Health Organization, during the recent G20 Summit in Rome.
Present along with Bolsonaro was Brazilian Health Minister Marcelo Queiroga, and a translator who translated from Portuguese to English, as President Bolsonaro is asking his questions to Tedros Adhanom in Portuguese, while Adhanom replies in English.
The audio is difficult to hear, but someone has made a 2-minute clip with English subtitles, which we have uploaded to our Bitchute and Rumble channels.
In the clip, President Bolsonaro is complaining to Tedros Adhanom that the lockdowns have destroyed the economy and that people are having a hard time feeding themselves.
Tedros Adhanom replied that he didn’t think we needed more lockdowns.
President Bolsonaro then asked Adhanom if the WHO was going to mandate vaccine passports, to which Adhanom replied “not now,” because there were still many countries with a low vaccination rate, and to implement vaccine passports would amount to “discrimination.”
Next, President Bolsonaro asked why so many people who are fully vaccinated in his country are still getting COVID-19.
Tedros Adhanom gave the official response, which is that the vaccines are not even designed to stop transmission, but to prevent serious illness and death.
This well-known fact alone should be reason enough to stop mandating the shots, but the health authorities around the world along with the pharma-controlled corporate media continue lying to the public and stating that people just get the shots to stop transmission.
But they were never designed to do that!
As to the claim that they reduce death, President Bolsonaro stated: “In Brazil, many who got the second dose are dying.”
Tedros Adhanom admitted that this can happen, and blamed it on “comorbidities and underlying conditions.”
President Bolsonaro then said something very revealing, if we are to trust the English transcription, and that is that he was lamenting the fact that these shots were being given to children, but that he was powerless to stop them, because governors and mayors have more power than him to mandate the shots to children, due to “a decision of the judicial power.”
If this is an accurate translation, then I think we are seeing a pattern here where executive branches of government are being over-ridden by the judiciary in trying to stop vaccine mandates, as that is exactly what is happening here in the U.S. where some governors are trying to stop the mandates, but the courts are over-ruling them.
The next part is not clear, and there is a longer version of this conversation on YouTube here that is over 13 minutes long, but without English subtitles, and it seems that President Bolsonaro is mentioning the fact that the WHO does not recommend the shots for children, and he apparently wanted the WHO to make a stronger statement on this to prevent countries from injecting children.
But it seems, especially from the longer version, that Tedros Adhanom mainly just listens here, and does not really say anything about changing what the WHO says regarding children receiving the shots.
President Bolsonaro complains that anything they try to say about the vaccines is labeled as “fake news” by the media.
He clearly seems distressed that these shots are being mandated for children, and states:

The lives of the children are at stake and nothing better than to follow what Adhanom said, this determination of the WHO.

He is apparently asking Tedros Adhanom for help in stopping the mandates for children, but I seriously doubt he will get it.
Tedros Adhanom is a known terrorist with ties to Bill Gates, the Clinton Foundation, Dr. Fauci, China, and many others. See:

President Jair Bolsonaro has been very outspoken criticizing the official COVID response, and he himself is apparently one of the only heads of state that has chosen to NOT get a COVID shot.
When he attended the UN General Assembly in New York this past September, he was forced to eat pizza out on the street as New York’s vaccine policy did not allow him to dine indoors without proof of vaccination. (Source.)
Not included in this two-minute clip with English subtitles (but included in the longer clip on YouTube) are apparently comments President Bolsonaro made about being the only head of state currently under investigation for “genocide” regarding his response to COVID-19.
MercoPress, an English publication based out of Montevideo, Uruguay, reported:

Brazil’s President Jair Bolsonaro was recorded telling World Health Organization (WHO) Director Tedros Adhanom he was the only head of state charged with crimes against humanity for his handling of the COVID-19 pandemic. The conversation is said to have taken place on the sides of the G20 Summit in Rome.
An investigative committee made up of Brazilian Senators, known as CPI, has drafted a report accusing Bolsonaro of three crimes against humanity during the pandemic, an accusation that will be sent to the International Criminal Court in The Hague, as well as to local prosecutors.
“I am the only head of state in the world who is being investigated, accused of genocide,” Bolsonaro told Adhanom.
The informal dialogue is said to have taken place Sunday in Rome and it was recorded in a video quoted today by the daily Valor Economico.
Joining Bolsonaro and Adhanom was Brazilian Health Minister Marcelo Queiroga, who joined the conversation to say, laughing: ”I’m also going to go with him (Bolsonaro) to The Hague, to walk to The Hague.“ Queiroga is also accused by the parliamentary commission of alleged crimes committed while managing the pandemic. (Source.)

The clip ends with President Bolsonaro asking Adhanom “What is the origin of the virus?”
Adhanom replies with a smile: “We’re still studying it” which prompted chuckles from those there.
President Bolsonaro replies: “Good answer.”

Politicians are Powerless to Stop the Genocide

This is more proof that politicians are powerless to stop the current genocide of injecting as many people as possible with these gene altering bioweapons to reduce the world’s population.
I applaud President Bolsonaro in seeking help in trying to stop this, but by not following the narrative now he is the one allegedly being tried as a criminal in the international court for “crimes against humanity,” while the real criminals go free.
Politicians are not calling the shots. They are following the script written for them by the Corporate Globalists, and when they choose not to follow that script this is what happens to them.
My guess is that President Bolsonaro’s life is probably in danger right now, similar to many of the African heads of state who all mysteriously died while in office if they questioned the official narrative to COVID.

It sounds like the situation in Brazil is similar to the U.S. where the judiciary is owned and controlled by the Corporate Globalists, ensuring that their plans are carried out.
The only way this can be changed is for massive resistance and defections from the military and law enforcement. Corrupt judges need to be removed from the bench, and replaced with honest ones who are not controlled by the Corporate Globalists, where justice is for sale to the highest bidder.
And that includes the Supreme Court in the United Sates.
Help will most certainly not come from the World Health Organization, because that is firmly in control of the Corporate Globalists, led by Bill Gates.
Bill Gates, either directly through his foundation or indirectly through other organizations, is the largest donor to the World Health Organization, outspending any single nation.
I documented the evidence in April of last year that Bill Gates was controlling the U.S. response to COVID-19, and not the White House or President Trump. See:


Who is Controlling the U.S. Response to COVID19: The White House or Bill Gates?

This is why I beat this message into the ground every opportunity I get: Right versus Left does not matter!
Because the politicians are not running the show, the Corporate Globalists are, and they are happy when the public is divided by partisan politics.
Comment on this article at HealthImpactNews.com.