OUT OF MIND » BREAKING NEWS & HOT TOPICS » THE GREAT DIE OFF » Researcher Speaks Out on Pfizer COVID Vaccine Trial, Calls It a ‘Crazy Mess’

Researcher Speaks Out on Pfizer COVID Vaccine Trial, Calls It a ‘Crazy Mess’


On the latest episode of “The Jimmy Dore Show,” comedian and political commentator Jimmy Dore discussed a report by The BMJ on a whistleblower’s revelations about Pfizer’s Phase 3 COVID vaccine trial.
By
Jeremy Loffredo 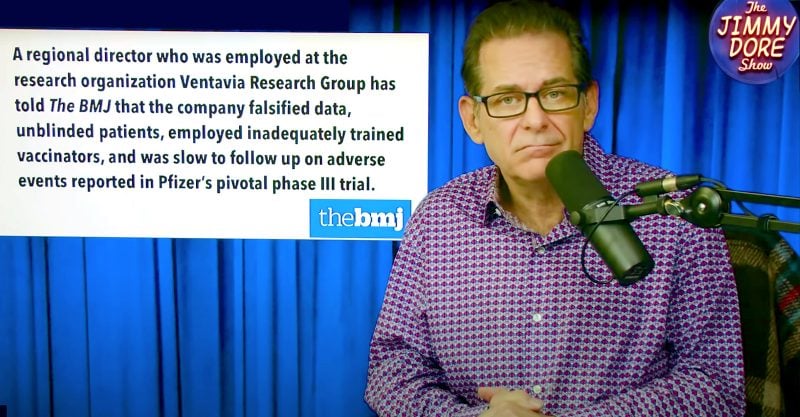 Miss a day, miss a lot. Subscribe to The Defender's Top News of the Day. It's free.
On the latest episode of “The Jimmy Dore Show,” comedian and political commentator Jimmy Dore discussed the recent bombshell report in The BMJ on Pfizer’s Phase 3 COVID vaccine trial.
The BMJ’s report exposed faked data, blind trial failures, delayed follow-ups on serious adverse reactions and the silencing of researchers who were critical of the trials practices.
A researcher who worked on the trial described the studies to The BMJ as a “crazy mess.”
“Big Pharma are the biggest liars, scammers and criminals in the country — so you know they had to do some shady stuff with the COVID vaccine and sure enough — they did,” said Dore.
Brook Jackson played a central role in the explosive report. Jackson worked as a regional director at Ventavia Research Group, the outside contractor Pfizer hired to conduct the Phase 3 trial.
The BMJ report mentions how in autumn 2020, Pfizer CEO Albert Bourla released an open letter to the billions of people around the world “who were investing their hopes in a safe and effective COVID-19 vaccine to end the pandemic.”
Bourla wrote that the company was “operating at the speed of science.”
“Science says vaccines can’t end the pandemic because they don’t and were never designed to stop transmission,” Dore argued.

ORDER TODAY: Robert F. Kennedy, Jr.'s New Book — 'The Real Anthony Fauci'
The BMJ reported:
“ … for researchers who were testing Pfizer’s vaccine at several sites in Texas during that autumn, speed may have come at the cost of data integrity and patient safety,” and that “staff who conducted quality control checks were overwhelmed by the volume of problems they were finding.”
Jackson told The BMJ during her two weeks of employment at Ventavia in September 2020, “she repeatedly informed her superiors of poor laboratory management, patient safety concerns  and data integrity issues.”
Documents obtained by The BMJ also showed a Ventavia executive was aware of staff members who were “falsifying data.”
The BMJ reported that on Sept. 25, 2020, Jackson called the U.S. Food and Drug Administration to warn about unsound practices in Pfizer’s clinical trial. She then reported her concerns in an email to the agency.
Later that afternoon Ventavia fired Jackson. According to her separation letter, obtained by The BMJ, the Pfizer subcontractor deemed her “not a good fit.”
Jackson told The BMJ it was the first time she had been fired in her 20-year career in clinical research.
Dore said:
“That’s not how science works. You’re supposed to have people documenting adverse reactions so the vaccines can be made safer. If you want the vaccinated to shut up about their adverse reactions that makes you part of a cover-up.”
According to The BMJ, Jackson listed more than a dozen concerns with the trial, including participants not being monitored by clinical staff after injection, lack of timely follow-up of patients who experienced serious adverse events, protocol deviations not being reported, vaccines not being stored at proper temperatures, mislabelled laboratory specimens and the targeting of Ventavia staff for reporting trial issues.
The BMJ also spoke with two former Ventavia employees who agreed to speak with the medical journal anonymously for “fear of reprisal and loss of job prospects in the tightly knit research community.” Both former Ventavia employees confirmed Jackson’s complaint.

Double your impact! When you make a donation to Children's Health Defense, your donation will be matched — up to $2 million! Donate Now!
One former employee told the journal she had “worked on over four dozen clinical trials in her career, including many large trials” but had never experienced such a “helter-skelter” environment as with Pfizer’s Phase 3 trial.
The BMJ reported that since Ventavia collaborated with Pfizer for its initial Phase 3 trial, Pfizer hired Ventavia as a research subcontractor on other vaccine clinical trials, including the COVID vaccine for children and young adults, pregnant women and the trials looking at the safety of a booster dose.
“So Pfizer hired them again! Pfizer subcontracts out the risky work so they can have deniability,” Dore said.
John Campbell, Ph.D., discussed The BMJ report in a recent video, asking if the revelations will harm public trust in industry science.
“We should have perfect integrity and transparency all the way through [the scientific process] so the public can completely trust the clinical data … and this doesn’t help with that,” Campbell said.
Despite the bombshell revelations, the FDA granted Emergency Use Authorization to the Pfizer COVID vaccine for children ages 5 to11 years old, while the mainstream corporate press gave the BMJ report little to no coverage.
Children’s Health Defense asks those concerned about the FDA’s failure to investigate Jackson’s claims to contact their members of Congress.
Watch the segment here:

OUT OF MIND » BREAKING NEWS & HOT TOPICS » THE GREAT DIE OFF » Researcher Speaks Out on Pfizer COVID Vaccine Trial, Calls It a ‘Crazy Mess’