Source: Dillon Burroughs
The Kenosha Unified School District in Wisconsin has announced that five of its schools will switch to remote learning for the remainder of the week as a safety precaution ahead of potential violence over the verdict in the Kyle Rittenhouse trial.
The news came as jurors began their third day of deliberations in the high-profile trial on Thursday.

Hello! I’m live in #Kenosha at Harborside Academy, and you can see in this pic just how close the school is to the courthouse, where verdict watch continues in the #KyleRittenhouse trial. It’s one of 5 schools making changes due to the trial, I’ll explain at 5a on @WISN12News 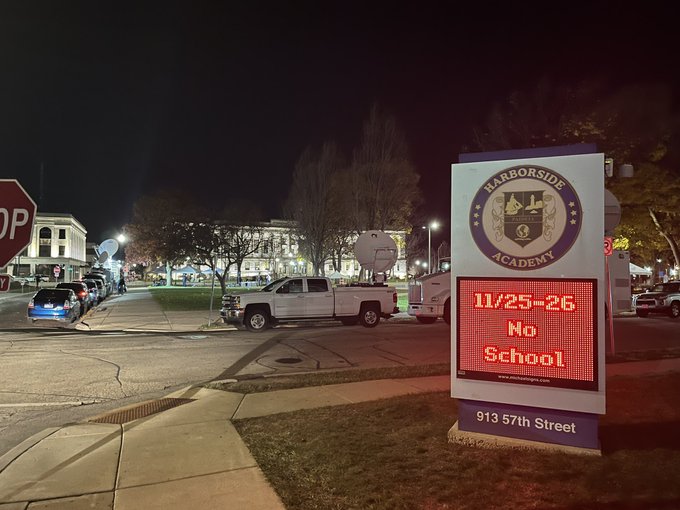 Rittenhouse, 18, is facing homicide and other charges in the shootings of three people, two of them fatally, during rioting in Kenosha on Aug. 25, 2020. He has said he acted in self-defense.
The school district said its move came “out of an abundance of caution due to the proximity of school boundaries to the courthouse and the number of students who walk to and from school,” Fox News reported.

“While we have not been advised of any existing imminent danger, we feel this is the best course of action to protect our students and staff during an uncertain time,” it added.
“We will continue to work closely with law enforcement to receive support as needed in the days and weeks ahead.”
WISN-TV in Kenosha reported the five schools were Brass Elementary, Frank Elementary, Harborside Academy, Reuther Central High School and Washington Middle School.
The report highlighted Harborside Academy and Reuther Central as being “right across the plaza” from the Kenosha County Courthouse.

·
Nov 18, 2021
Here is the full list of #Kenosha schools going virtual as verdict watch continues in the #KyleRittenhouseTrial

Hello! I’m live in #Kenosha at Harborside Academy, and you can see in this pic just how close the school is to the courthouse, where verdict watch continues in the #KyleRittenhouse trial. It’s one of 5 schools making changes due to the trial, I’ll explain at 5a on @WISN12News

Big changes for students in #Kenosha, some schools going virtual this morning, as we wait for #KyleRittennhouse verdict. #KyleRittenhouseTrial 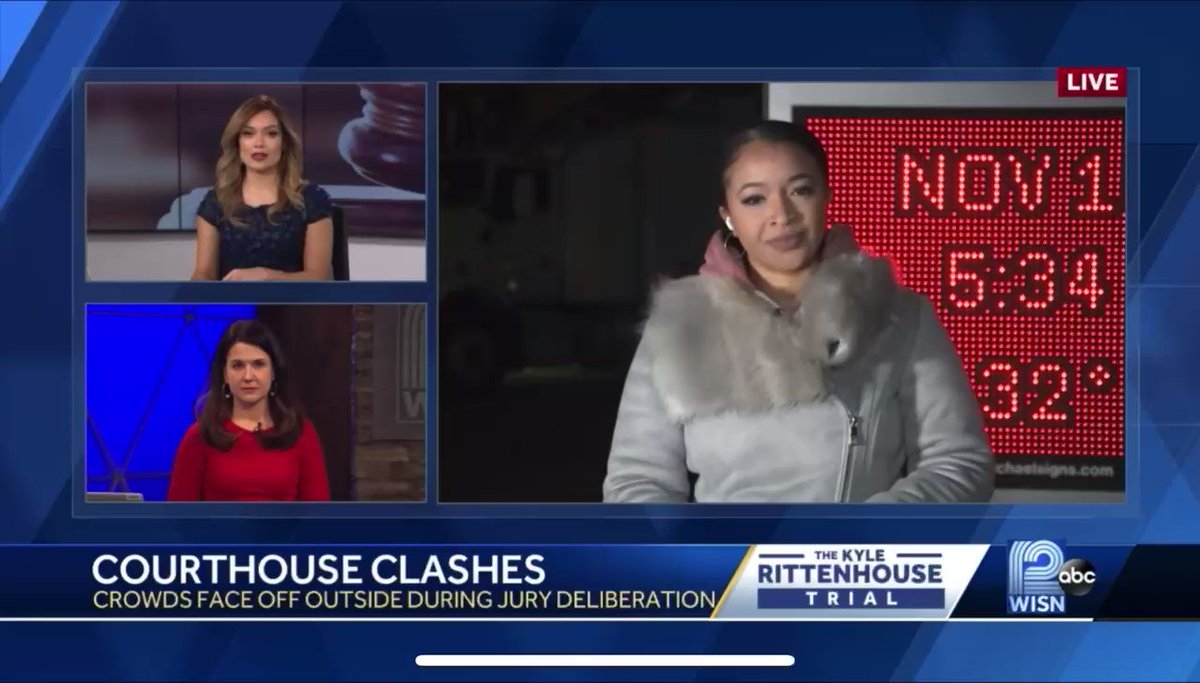 
The remote learning notice was sent Wednesday, according to the report — the same day two protesters were arrested outside of the courthouse after a confrontation that allegedly included an attack on a reporter.
Democratic Gov. Tony Evers of Wisconsin announced on Friday that hundreds of National Guard troops would be active near Kenosha this week as the city, state and country await a verdict in the Kyle Rittenhouse case.
“Approximately 500 Wisconsin Army National Guard troops are reporting for State Active Duty as authorized by Gov. Tony Evers to support local partners in ensuring public safety in conjunction with hundreds of officers from volunteering law enforcement agencies,” the governor’s office said in a news release. Related: Breaking: Rittenhouse Defense Requests Mistrial Without Prejudice
Evers said in a statement that he was hopeful that the situation in the city would remain peaceful, and he asked for the public’s assistance with that.
“We continue to be in close contact with our partners at the local level to ensure the state provides support and resources to help keep the Kenosha community and greater area safe,” he said.
“The Kenosha community has been strong, resilient, and has come together through incredibly difficult times these past two years, and that healing is still ongoing,” the governor added.

“I urge folks who are otherwise not from the area to please respect the community by reconsidering any plans to travel there and encourage those who might choose to assemble and exercise their First Amendment rights to do so safely and peacefully.”
Maj. Gen. Paul Knapp, Wisconsin’s adjutant general, also issued a statement vowing the National Guard would be ready to keep the peace.
“We stand ready to support our communities during times of need,” Knapp said. “In close coordination with the governor, we have assembled approximately 500 Soldiers to help keep the Kenosha community safe, should a request from our local partners come in.”