The UN Just Put up a Giant Statue in New York

Admin
Posts : 108328
Join date : 2012-01-04
Location : Woodstock Nation
The UN Just Put up a Giant Statue in New York That Resembles a ‘Beast’ Described in the Book of Revelation

Source: Michael Snyder
One of the strangest statues that I have ever seen in my entire life has just been set up right outside UN Headquarters in New York City.  When I first heard about this, I could hardly believe that the global elite would be so brazen, and so I checked into this very carefully.  Unfortunately, this is not just a bad rumor.  This absolutely gigantic statue is called “The Guardian of International Peace and Security”, and it looks like something out of a science fiction movie.
It does not resemble any known creature on this planet.  Instead, it appears to very closely resemble a “beast” that is described in the Book of Revelation.  If you have not seen it yet, you can see video footage of this “beast” right here.  Did they really think that they could put this up without anyone noticing?
If you do a search on Google News for this statue, you won’t find a single story from the mainstream media. Hopefully, that will change soon because people need to know about this. Before I go any further, let me share with you what the United Nations is saying about this new statute…
A guardian for international peace and security sits on the Visitor’s Plaza outside #UN Headquarters. The guardian is a fusion of jaguar and eagle and donated by the Government of Oaxaca, Mexico @MexOnu. It is created by artists Jacobo and Maria Angeles.

A guardian for international peace and security sits on the Visitor's Plaza outside #UN Headquarters. The guardian is a fusion of jaguar and eagle and donated by the Government of Oaxaca, Mexico @MexOnu. It is created by artists Jacobo and Maria Angeles. UN Photo/Manuel Elías 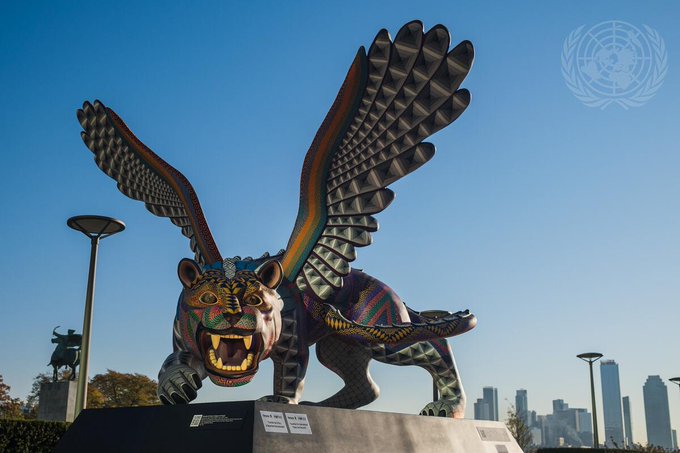 So it is supposed to be a “fusion” of a jaguar and an eagle. And just by coincidence, it has been painted in LGBT colors. Okay… Of course, when Christians see this monstrosity, they are immediately going to think of the “beast” that is described in Revelation chapter 13…

2 And the beast which I saw was like unto a leopard, and his feet were as the feet of a bear, and his mouth as the mouth of a lion: and the dragon gave him his power, and his seat, and great authority.

Jaguars and leopards have builds that are at least somewhat similar, and so I guess one could make an argument that the body of the statue resembles either one. As for the feet, they do seem to resemble those of a bear, and it is noteworthy that the feet are a totally different color from the rest of the body.
When it comes to the mouth, to me it looks more like the mouth of a lion rather than the mouth of a jaguar. You can see photos of lions with open mouths here and photos of jaguars with open mouths here.  Do a comparison and decide for yourself. As for the wings, I suppose that it could be argued that they were modeled after the wings of eagles.
But in ancient lore dragons were also reported to have wings, and it is interesting to note that a “dragon” is specifically mentioned in Revelation chapter 13. Tomorrow morning, Revelation 13 is scheduled to be part of my regular Bible reading. Just another “coincidence” I suppose.
Later on, in Revelation chapter 13, we learn that this “beast” that the Apostle John was shown represents the Antichrist which will rule the entire world during the days of the Great Tribulation…

4 And they worshipped the dragon which gave power unto the beast: and they worshipped the beast, saying, Who is like unto the beast? who is able to make war with him?
5 And there was given unto him a mouth speaking great things and blasphemies; and power was given unto him to continue forty and two months.
6 And he opened his mouth in blasphemy against God, to blaspheme his name, and his tabernacle, and them that dwell in heaven.
7 And it was given unto him to make war with the saints, and to overcome them: and power was given him over all kindreds, and tongues, and nations.
8 And all that dwell upon the earth shall worship him, whose names are not written in the book of life of the Lamb slain from the foundation of the world.
9 If any man have an ear, let him hear.
10 He that leadeth into captivity shall go into captivity: he that killeth with the sword must be killed with the sword. Here is the patience and the faith of the saints.
11 And I beheld another beast coming up out of the earth; and he had two horns like a lamb, and he spake as a dragon.
12 And he exerciseth all the power of the first beast before him, and causeth the earth and them which dwell therein to worship the first beast, whose deadly wound was healed.
13 And he doeth great wonders, so that he maketh fire come down from heaven on the earth in the sight of men,
14 And deceiveth them that dwell on the earth by the means of those miracles which he had power to do in the sight of the beast; saying to them that dwell on the earth, that they should make an image to the beast, which had the wound by a sword, and did live.
15 And he had power to give life unto the image of the beast, that the image of the beast should both speak, and cause that as many as would not worship the image of the beast should be killed.
16 And he causeth all, both small and great, rich and poor, free and bond, to receive a mark in their right hand, or in their foreheads:
17 And that no man might buy or sell, save he that had the mark, or the name of the beast, or the number of his name.
18 Here is wisdom. Let him that hath understanding count the number of the beast: for it is the number of a man; and his number is Six hundred threescore and six.

If this statue was actually purposely modeled after the “beast” of Revelation 13, could it be possible that the United Nations has just put out a huge “welcome mat” for the Antichrist?
For much more on the future reign of the Antichrist, please see my new book entitled “7 Year Apocalypse”. The statue that has just been erected outside UN headquarters in New York is also reminding many of a passage in Daniel chapter 7…

2 Daniel spake and said, I saw in my vision by night, and, behold, the four winds of the heaven strove upon the great sea.
3 And four great beasts came up from the sea, diverse one from another.
4 The first was like a lion, and had eagle’s wings: I beheld till the wings thereof were plucked, and it was lifted up from the earth, and made stand upon the feet as a man, and a man’s heart was given to it.
5 And behold another beast, a second, like to a bear, and it raised up itself on one side, and it had three ribs in the mouth of it between the teeth of it: and they said thus unto it, Arise, devour much flesh.
6 After this I beheld, and lo another, like a leopard, which had upon the back of it four wings of a fowl; the beast had also four heads; and dominion was given to it.
7 After this I saw in the night visions, and behold a fourth beast, dreadful and terrible, and strong exceedingly; and it had great iron teeth: it devoured and brake in pieces, and stamped the residue with the feet of it: and it was diverse from all the beasts that were before it; and it had ten horns.

These prophetic passages in the Bible are very well known, and officials at the UN must have realized that the statue would be linked to such passages by millions upon millions of people all over the globe.
But they put it up anyway.
With each passing day, things just keep getting weirder, and we continue to get more signs that we are in the end times.  I think that Bible prophecy expert Ricky Scaparo summed things up very well when he made this statement…

I believe the Lord is revealing these things to those who are spiritually discerning and awake in this hour to assure us that the time of the end is drawing closer and that we need to be watchful and remain in prayer as the “Day of the Lord” is at hand.

Needless to say, a giant statue of Jesus would never be allowed right outside of UN headquarters in New York.
But even if they publicly admitted that this statue represents the Antichrist, only a very small fraction of the population would insist that it should be taken down.