On December 5, 2021, NASA’s Ingenuity helicopter successfully flew to a new destination located very close to its original airfield, Wright Brothers Field, where it will await the arrival of the Perseverance rover. This 117-second flight pushed the total flight time past the 30-minute mark. 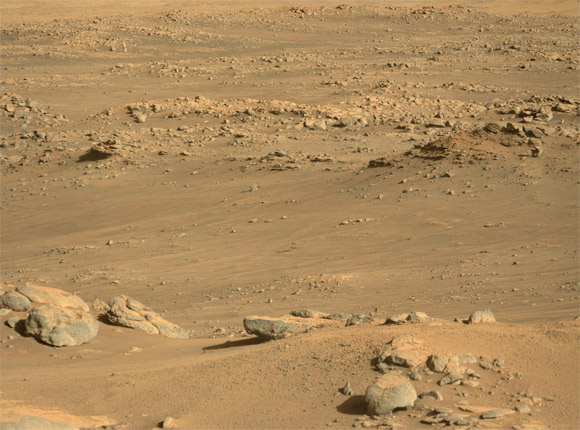 The Mastcam-Z instrument on NASA’s Perseverance rover took this image of Ingenuity on December 1, 2021, when the rotorcraft was about 295 m (970 feet) away. Image credit: NASA / JPL-Caltech / ASU / MSSS.
The solar-powered 49-cm- (19.3-inch-) tall Ingenuity helicopter was designed as a technology demonstration to perform up to five experimental test flights.
It first flew on April 19, 2021, with a short up-and-down hop to prove powered, controlled flight on Mars was possible.
The next four experimental flights expanded the rotorcraft’s flight envelope, making increasingly longer flights with more complicated maneuvering.
With the sixth flight, the helicopter embarked on a new operations demonstration phase, investigating how aerial scouting and other functions could benefit future exploration of Mars and other worlds.
In this new chapter, Ingenuity has operated from airfields well south of Wright Brothers Field, scouting rocky outcrops and other geologic features of interest to the Perseverance science team.
“Few thought we would make it to flight one, fewer still to five,” said Ingenuity team leader Dr. Teddy Tzanetos, a researcher at NASA’s Jet Propulsion Laboratory.
“And no one thought we would make it this far.”
“On the way to accumulating over a half-hour aloft Ingenuity has survived eight months of bitter cold, and operated out of nine unique Martian airfields.”
“The aircraft’s continued operations speaks to the robustness the design and the diligence and passion of our small operations team.”
Along with accumulating 30 minutes and 48 seconds of flight time, Ingenuity has traveled over the surface a distance of 3.592 km (2.2 miles), flying as high as 12 m (40 feet) and as fast as 5 m/sec (10 mph).