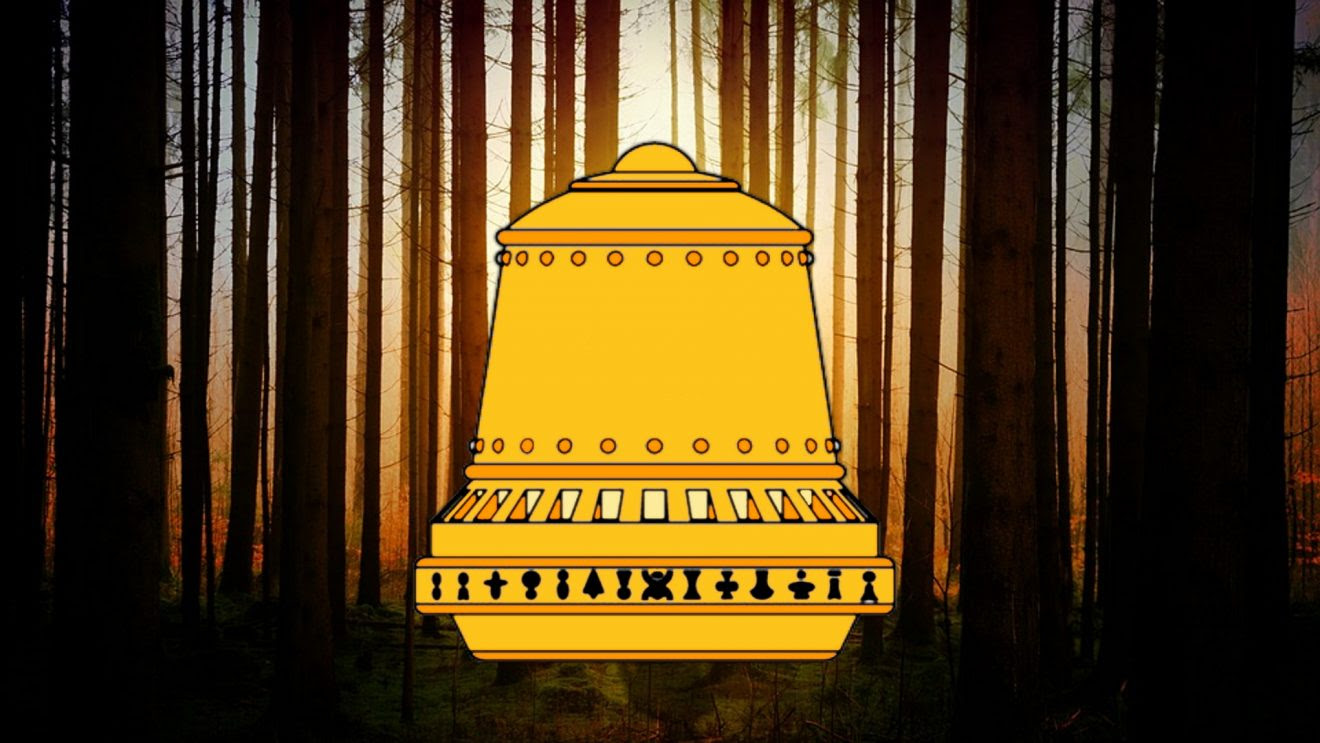 A few days ago we celebrated a famous UFOlogical anniversary. On Dec, 9, 1965, a UFO crashed near the little village of Kecksburg, Pennsylvania, east southeast of Pittsburgh. The object had actually been seen by scores if not hundreds of witnesses as it streaked southeast from the Canadian plains, over Michigan, Ohio, and Pennsylvania. According to some witnesses who saw the object up close and personal, it was acorn-shaped, about 12-15 feet tall, about 9 feet wide, and a bronze-golden color. Some witnesses also described strange symbols or runic-like writing around the “rim” of the acorn. What made – and makes – the story very intriguing is not only the number of witnesses to the UFO and its crash, but also the number who maintain that within mere hours of the crash, the little village of Kecksburg was deluged with US military personnel and “men in suits”, who promptly recovered the UFO and – according to some witnesses – carted it off to Wright-Patterson air base in Dayton Ohio, where it was briefly seen by a local worker who had been contracted to deliver ceramic bricks to the base.
The story, as readers of my books (and in particular, The SS Brotherhood of the Bell) well know, the story intrigued me because the size and shape of the Kecksburg acorn, not to mention the little detail about the ceramic bricks, sounded very much like the Nazi Bell story.  As far as I’m aware, no one up to that point had observed the similarity nor posited a connection.  Other explanations were offered, however, including that the object was a crashed Soviet satellite which was recovered by the US military. Possibly… but there’s a difficulty: the Kecksburg acorn did not just “crash”; it maneuvered during its long flight from Canada to Pennsylvania, including, as we’ll see, some maneuvers just before the crash.
All this is background to a recent article by Stan Gordon(shared by K.M.), the chief UFOlogy researcher into the Kecksburg mystery, and he has shared some more information:
Kecksburg, PA UFO Incident: Some Interesting Details 56 Years Later
Gordon writes:

Over the years, I tracked down hundreds of people who were involved with the Kecksburg case. In time, many individuals did break their silence and discussed what they had experienced. During my 56 years of research into this case I have learned a lot of details about what apparently did take place at the time but was never made known to the public. I have absolutely no doubt that an object did fall from the sky that afternoon in December of 1965 and was apparently recovered by the military. During my many years of investigating the case, there were some details that surfaced that were associated with the incident that were quite interesting. However, I never discussed those subjects publicly until years later when I had enough independent confirmation from other sources that could confirm that such an event did occur.
The following are just some of some very interesting details that I have learned about the case.
* The object was moving roughly SE from Allegheny county into Westmoreland county and over the city of Greensburg. It moved toward Route 30 east near what was then the Gee Bee department store and made a turn to the south. The object was observed from such areas as Margurite, Norvelt, Mammoth, over the outskirts of Kecksburg, and continued to move toward the mountains of Laurelville about 3.5 miles away. The object seemed to hesitate over the mountain, turned and began to travel toward the NE and passed near the outskirts of  Kecksburg, then turned again and dropped down into the woods. Area residents who saw the object fall said that it was moving quite slow and went down as though it was making a controlled landing. There were no parachutes reported at the site during or after the landing.
* Some witnesses reported seeing the fiery object as it moved across the sky. Some local witnesses, however, had a better view of the object as it passed low overhead before it fell. The late Randy Overly was playing near Norvelt, that afternoon when he heard a hissing sound and noticed an object in the distance moving slowly toward his location. The object passed only about 200 feet overhead giving him a good view of the object. The object was moving steadily, at about the speed of a single engine airplane. The object was acorn shaped with a goldish-brown color and had a vapor around it. The witness noticed green flames around the back of the object. He watched the object as it continued to move off in the distance. (Boldface emphasis added)

Note that some people indicate the object made a controlled, or at least, semi-controlled, landing, while other maintain that it crashed, though moved slowly.  Here the parallels with the Bell story again intrude, for the Kecksburg object apparently made a “hissing” sound and gave off “vapours,” recalling the Bell’s nickname, der Bienenstock, the “beehive” for the buzzing sound it made.
A key role in the Kecksburg  story was played by volunteer fireman Jim Romansky, who was the one who described the strange writing on the object:

* A team of firemen came across the object acorn shaped object. The late James Romansky, a young volunteer fireman at the time, stood only a few feet away from the object. According to Jim, the object was large enough for a man to stand up inside of it. The object was a bronze-gold color, and appeared to be one solid piece of metal, displaying no rivets or seams. At the back of the acorn shape was what Jim called the bumper area. Upon that section of the object were unusual symbols that Jim said looked similar to Egyptian hieroglyphics. Romansky, who was a machinist for many years, said the object itself looked as though it had been constructed from liquid metal that had been poured into an acorn-shaped mold.

Some posited that what Romansky saw and described as “hieroglyphics” was perhaps Cyrillic lettering one what they assumed was a crashed Russian satellite. There is a problem with this explanation and anyone familiar with the culture of Pennsylvania will know what it is, and it’s suggested by Romansky’s surname itself: the heavy presence of people with Slavic background; onion domes of Orthodox and Eastern Rite Roman Catholic churches dot the landscape in Pennsylvania, and most people there are familiar with Cyrillic script. Romansky would have been unlikely to have confused “hieroglyphics” with “Cyrillic.” And as far as the Bell story goes, here the similarities break down, for there is no source that maintains there was any writing on the Nazi device. Would they have written on it: very possibly. But again, there’s no source or alleged source describing it.  The other parallels – shape, dimensions, sound – remain.
And so does the Kecksburg story. Gordon concludes his article with perhaps the most pertinent aspect of the Kecksburg story:

My investigation of the Kecksburg case started as the news was breaking that evening in 1965 and has uncovered a massive amount of information from many independent sources that an object did fall from the sky into a wooded area near Kecksburg and was recovered by the military. What that object was remains undetermined. I never tried to prove that the object that fell was ET in nature. For years I  suggested the possibility that the object could have been a highly advanced man-made space probe with some controlled re-entry capability or a secret military or government experiment. It also should not be ruled out among other more common explanations the possibility that the object was an extraterrestrial spacecraft.
It has been 56 years and the government has not told the public what the object was that was recovered near Kecksburg that day in 1965. Many witnesses have now passed away and never learned the truth about what they saw or experienced. The public deserves an answer.

What’s intriguing to contemplate here is the contrast between the Kecksburg case, and the contemporary narrative of “openness” and “disclosure” from the government about UFOs. We’ve seen the various newspaper articles from the New York Times and the Washington Post, we’ve seen the television interviews, the pictures, the films and a certain segment of the UFOlogy community has jumped on the narrative bandwagon that perhaps this new “openness” and willingness of the government to discuss the UFO and the alleged extra-terrestrial nature of the phenomenon signals a new era.
Perhaps, but I remain skeptical, and not simply because this government lies, and lies constantly. I remain skeptical because of cases like Kecksburg – now over half a century old – that there is a clear case of a crash and retrieval of “something” and of military involvement, as anyone familiar with Mr. Gordon’s years of research on the subject are aware. Fifty-six years later, we’re still left wondering, was it a crashed Soviet satellite? a crashed bit of post-war Nazi technology (and if so, what the heck was it doing in Canada and the upper mid-west? and who was flying it?)  Was it extra-terrestrial? Crypto-terrestrial? Santa Klaus? We simply – and to this day – don’t know.  If it was a recovered technology, is it so advanced that it must remain classified even today?
But one thing remains certain: Kecksburg and cases like it give lie to the government’s so-called “new openness” regarding UFOs.
See you on the flip side…