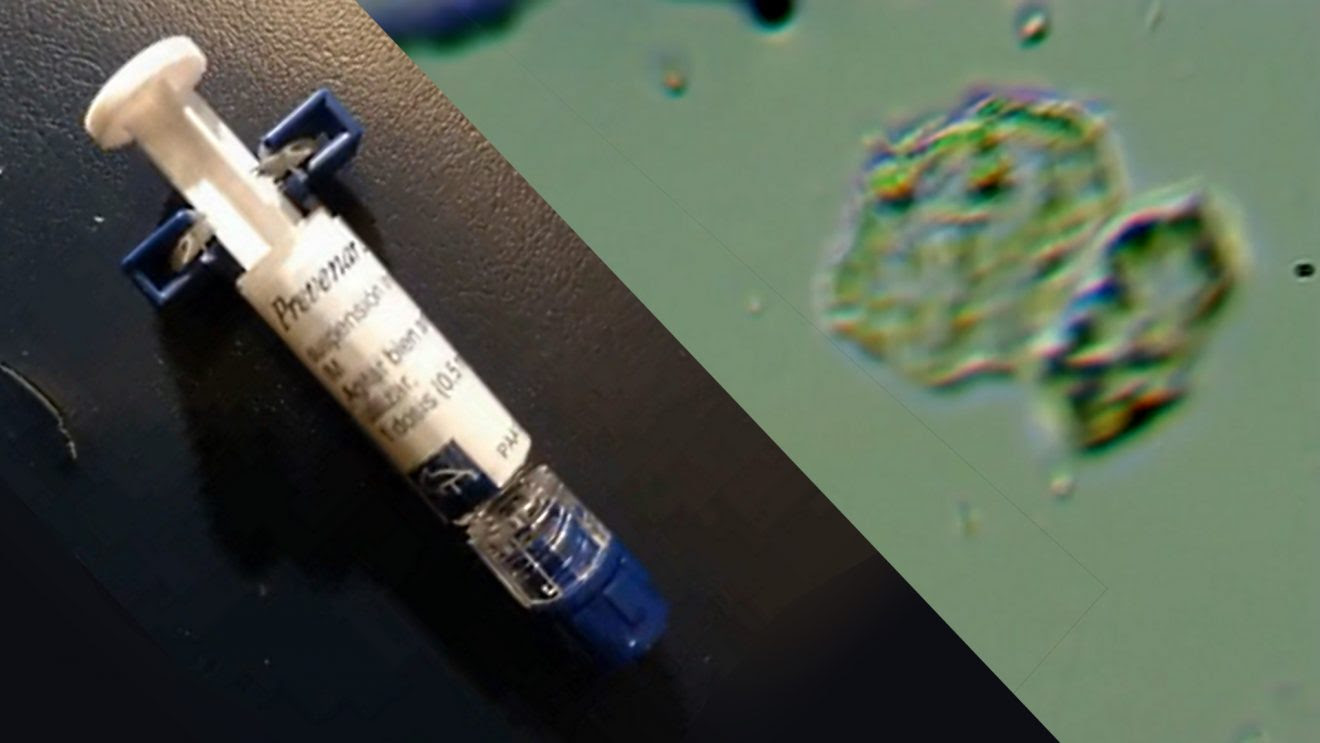 
Truth Comes to Light editor’s note:
Below you will find a video with English translation (courtesy of Orwell City) for La Quinta Columna’s first look at the contents of Prevenar 13 (PCV) under a high power microscope. Prevenar 13 is a pneumoococcal vaccine that is routinely given to infants and babies. Evidence of Graphene Oxide is clearly seen. They will be following up with additional analysis and reports.
Per NHS, UK: Pneumococcal conjugate vaccine (PCV) is used to vaccinate children under 2 years old as part of the NHS vaccination schedule. It’s known by the brand name Prevenar 13.
Per CDC, US: Give PCV13 to infants as a series of 4 doses, one dose at each of these ages: 2 months, 4 months, 6 months, and 12 through 15 months.

I think I have a video here to finish. Yes, of course. It’s an important video. Today we have used the optical microscope that we were able to acquire thanks to the donations that you made to La Quinta Columna at the time. And we have analyzed under the microscope the vaccine Prevenar 13, an anti-pneumococcal vaccine. A vaccine of the calendar that’s traditionally in the calendar. It’s precisely for the youngest, for children, including infants from 6 months onwards.
Let’s see what material we have found there. Because, normally, when we look at the optical microscope that has a quality of 60x to 100x, 200x, 400x, or 1000x at the most, we should see microscopic substances. And the only visible ones should be salts. Salts that look like crystals and that are used in the dissolution itself. And something else. And little else. Maybe some metal, but very few.
However, we have come across for the umpteenth time this graphene-like material that we have seen so much. Particularly, in the misnamed anti-COVID vaccines. Of course, indeed, they’re actually pro-COVID vaccines.
This material has a very special feature. It not only has an identity trace when analyzed or radiated with micro Raman spectroscopy, as Dr. Campra already did, but under the optical microscope, it looks like it had folds. As if it were a kleenex tissue at the bottom of a swimming pool. At the same time, it tends to fold back on its edges. These are graphene nanosheets. Let’s look at these images that we have taken from the Prevent 13 vaccine today.
What’s the traceability that you ask so many questions about? It was directly traced. A sanitary sent it to the domicile of La Quinta Columna. So let’s take a look at those images and judge for yourselves since this substance or this type of material shouldn’t appear in the Prevenar 13 vaccine. Let’s take a look at it.

Well, there’s a little video for you guys to see that it’s a live image that we’ve recorded. And as I say, this has all the appearance of the fashionable material. Of that “wonder material” that’s so wonderful that they have introduced it inside the vaccines so that your children can also carry it inside their bodies.
Here. The previous image was also quite clear. Let’s see, let’s move it forward a little bit.
You can see it here as well. This is the same material that you will see magnified now. Let’s see. When you see this delineation between the light green and the dark green, know the light green is what’s inside the drop. On the outside, that dark green and this striped aspect that you can see is the microscope slide. So, whatever is inside the light, well, that’s everything that belongs to the vaccine.
OK? Let’s continue. Although you don’t recognize the graphene, this shouldn’t be there. OK? Not in a calendar vaccine or any other type of vaccine. This also looks like graphene. A lot.

If we laser here, through spectroscopy, and measure the identity fingerprint, in all likelihood it’ll give us the two peaks characteristic of reduced graphene oxide. In addition, it’s likely to be doped with some metals. Here you see the fold. The folded edge. It has the appearance of graphene nanosheets.

Now we have a little video here of a graphene nano-ribbon, which is also introduced.
If you take as a positive control the graphene oxide that they sell, for example, in any store, you’ll see that this type or typology of objects —as we did in the past in some video of La Quinta Columna—, is distributed as an aqueous solution of graphene dispersion. Like a new type of nanotechnology introduced in vials with a purpose that you already know. If you see, it has the very characteristic appearance that already appeared in Dr. Campra’s preliminary report back on June 28.
This appearance of nano-ribbons is also graphene-based. Well, that was the Prevenir 13 vaccine video. In just four droplets under the microscope.
We often wonder why any hospital that has a good microscope —at least an optical microscope— doesn’t analyze the remains of a vaccine. Because, supposedly, there must be nanoparticles. Nanoparticles. Therefore, they shouldn’t be visible under an optical microscope.
And, moreover, they should be homogeneous. And only visible, in any case, an electron microscope. As we saw them, as you know, in that preliminary report by Dr. Campra. And why don’t they check themselves that these graphene-based nanosheet structures do indeed exist? Because when we subjected it to spectroscopy it gave the fingerprint of the identity of graphene oxide. Moreover, there are the patents of the Ministry of Industry, Trade, and Tourism itself on the official website of the Spanish government and other international health ministries.
So, why do you continue to deny it? Well. We do know why: because they continue to cover up the murder weapon. So, all those really covering this up are accomplices of a covert genocide. They’re, literally, criminals and murderers in the service of supranational entities. Pharmaceutical corporations included. To reduce the world’s population and, of course, neuromodulate it. And graphene is precisely the base raw material in this technology.
So, what else needs to be done? What more evidence do we have to demonstrate from La Quinta Columna and other information channels, such as InfoVacunas or El Arconte that are also denouncing it? What needs to be done? How many complaints need to be filed?
We have filed more than three hundred criminals, administrative and litigation complaints. How many ways have to be exhausted so that you’re aware that the world population is being killed? What else needs to be done? We’re volunteering again, both myself and Dr. Sevillano —as well as Dr. Campra himself— to go to a court and to expose all the knowledge and all the reliable evidence we have.
And we demand that the European Medicines Agency —of course, in the quality control that supposedly makes the Spanish Agency of Medicines and Health Products, whose maximum responsible is this socialist councilor of Utrera, Mrs. Silvia Calzon Fernández, who’s its director and president—, to make an analysis to, somehow, provide a counter-analysis to the one made by Dr. Campra. Which, to date, is the only independent report in the world.