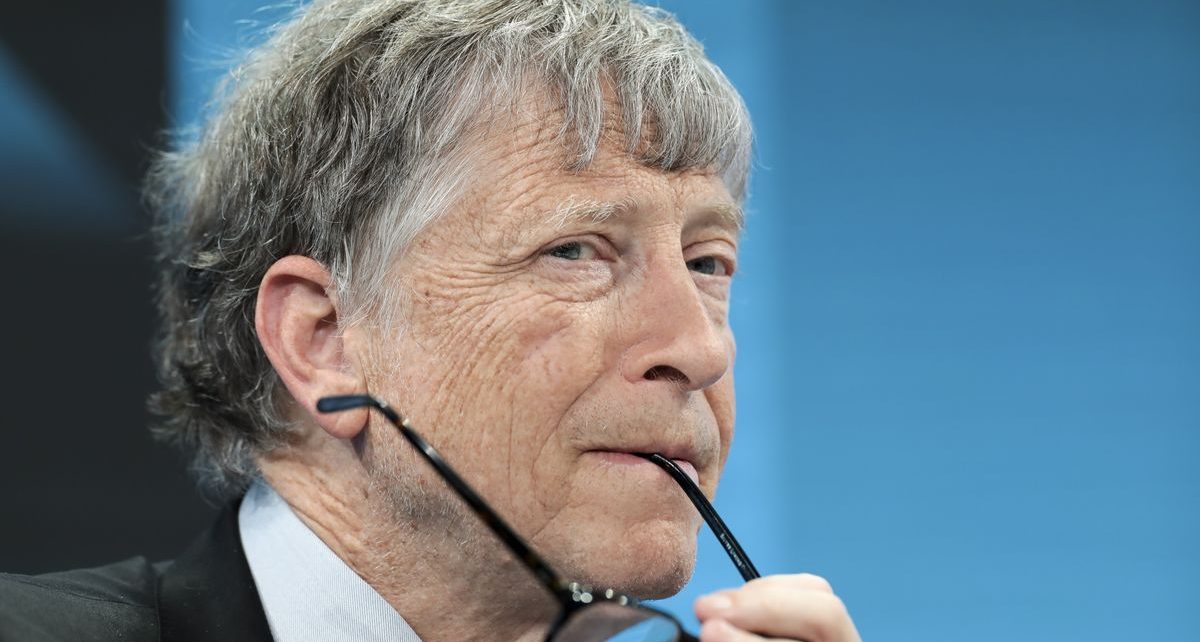 
Perpetual doomsayer Bill Gates has called for censoring social media in his latest effort to combat so-called “disinformation”.
On December 7th, Bill Gates released his 2021 Year in Review on his blog “GatesNotes”. In this annual blog, former Microsoft founder and “philanthropist” treats us to his personal review of 2021, as well as predictions for what to expect in 2022. There are a number of points worth dissecting, but first, let’s provide some background for those who might be wondering, “Who the hell cares what Bill Gates thinks?”.
For the last two years, the international public has been confronted with the opinions of Bill Gates. Despite not having any formal medical training or experience, Gates has been paraded in front of the public by the corporate media. Of course, this could be related to the fact that Gates has given over $300 million to various corporate media outlets in recent years. Either way, his thoughts, views and opinions have been promoted as the gold standard largely due to his apparent 2015 “prediction” regarding the next major pandemic.
However, as regular readers of TLAV will no doubt be aware, Bill Gates is anything but a benevolent philanthropist. As exposed in my 3 part 2020 investigation “Bill Gates’ Web Of Dark Money And Influence”, Gates’ agenda is much darker than most people imagine.
In May 2020 I outline the situation:

“Bill Gates has used his immense wealth to garner influence and media time, spreading his message of fixing global health issues while he continues to make billions. Using the Bill and Melinda Gates Foundation to dole out grants and donations, Gates has created a web of organizations who owe their budget to the foundation or answer directly to Gates. By tracing the Foundation’s investments and Gates’ relationships we can see that nearly every person involved in the fight against COVID-19 is tied to Gates or his foundation by two degrees or less. This gives Bill Gates and his foundation an unchallenged influence over the response to the pandemic. Equally worrisome is Gates’ call for global lock down until the entire world has been vaccinated and given a digital certificate to prove immunity.”

These connections to international health bodies, via his foundation, first sparked the #ExposeBillGates movement in the Summer of 2020. Thousands of people around the world protested and rallied seeking to expose the danger of Gates’ proposals. Additionally, Gates seems to be something of a psychic, where he calls for certain proposals and weeks or months later nations begin to implement the proposals.
As I wrote in June 2020, “over the last four months Bill Gates has made dozens of media appearances where he has called for several controversial “solutions” to COVID-19. Gates says these proposals must be implemented before society can go back to “normal”, including calls for extended lock downs, health surveillance (aka contact tracing) and digital certificates.”
What Gates was originally describing as “digital certificates” have now morphed into so-called “immunity” or “vaccine passports,” a form of digital identification that will hold an individual’s health data, as well as their vaccine status. As I noted at the time, during a Reddit AMA, Gates stated,

“Eventually we will have some digital certificates to show who has recovered or been tested recently or when we have a vaccine who has received it.”

Now, in late 2021, we can see that many nations around the world have followed the advice of Bill Gates. This is why it’s relevant to understand what Bill Gates is calling for and what he is “predicting” about the future.

As one would expect from a man who has invested billions of dollars into launching new vaccination programs, Bill Gates spends a fair amount of time discussing what he sees as the importance of vaccines for health. After fawning over his investments, Gates moves on to discuss challenges facing humanity. Specifically, he outlines the declining trust in media and government. Gates writes:

“The other area where there is huge room for improvement is in finding ways to combat disinformation. As I mentioned, I thought demand for vaccines would be way higher than it has been in places like the United States. It’s clear that disinformation (including conspiracy theories that unfortunately involve me) is having a substantial impact on people’s willingness to get vaccinated. This is part of a larger trend toward distrust in institutions, and it’s one of the issues I’m most worried about heading into 2022.”

Gates goes on to describe how “the pandemic has been a massive test of governance” due to the lack of trust from the people. Gates believe this lack of trust in public institutions is “creating tangible problems and complicating our efforts to respond to challenges.” Gates says he is “more worried than I’ve ever been about the ability of governments to get big things done.” For technocrats like Gates, a lack of trust in governments means a lack of trust in “major new initiatives”, including “avoiding a climate disaster or preventing the next pandemic.”
Gates also laments what he sees as an America that is “becoming more divided and more deeply entrenched in their political beliefs”, which he blames on a “24-hour news cycle, a political climate that rewards headline generation over substantive debate, and the rise of social media.”
From here on out Gates makes it clear that he believes the answer to combatting what he calls misinformation is more censorship of social media and the Internet itself. Gates advocates for governments to regulate “what you can and can’t use social media for”.

“I believe that governments need to regulate what you can and can’t use social media for. In the United States, this topic has raised a lot of free speech questions. But the reality is that our government already has all sorts of norms around communication.”

In his attempt to push for regulation and censorship of the Internet, Gates attempts comparisons with “network TV shows” not being able to show explicit sex scenes or use profane language before 10 p.m. “These rules exist to protect people. So why couldn’t our government create new rules to protect them from the most tangible harms created by social media?,” Gates asks. “They wouldn’t be easy to enforce, and we’d need public debate about exactly where the lines should be, but this is doable and really important to get done.” Gates ends his rant by stating that videos claiming the COVID-19 shots cause infertility should not be allowed to spread widely.

As outlined in my recent investigation into The Great Narrative and The Metaverse, the Technocratic elite are attempting to push society towards a digital dystopia where we abandon our physical bodies in favor of virtual avatars. Gates’ former company Microsoft — which he still holds stock in — is heavily invested in bringing the Metaverse to life.
Gates predicts that within the next two or three years “most virtual meetings will move from 2D camera image grids… to the metaverse, a 3D space with digital avatars.” Gates notes that Facebook (now Meta) and Microsoft have recently unveiled their visions for the Metaverse. Gates believes this is part of the overall trend of digitization of our lives — work, school, and healthcare.
“The idea is that you will eventually use your avatar to meet with people in a virtual space that replicates the feeling of being in an actual room with them,” Gates wrote. “To do this, you’ll need something like VR goggles and motion capture gloves to accurately capture your expressions, body language, and the quality of your voice.”

The entire 2021 Year in Review blog is filled with pictures of scenes which have, unfortunately, become ubiquitous in some parts of the world: children wearing masks or having a temperature gun to their head; people social distancing; shots being given to children (despite the low risk to their health); and the use of vaccine passports/digital IDs to travel and work. This is a vision of what Gates and his friends in the media have called “The New Normal”. They have attempted to implant the phrase into our minds in a desperate effort to condition the free hearts and minds of the world to accept this anything but normal reality.
Gates writes that, “in 2021, the pandemic has dominated our lives since day one. We’ve all had to adapt to a “new normal,” although what that looks like is different for every person. For me, the result has been a year spent mostly online.” As he makes predictions for 2022, Gates also writes, “I think 2022 will be a year when many of us finally settle into a post-pandemic new normal.”
The assumption that the people of the world will willingly submit to a “new normal” is a huge misreading of the situation by Gates and the members of The Predator Class. Despite their best efforts to bribe people to take the shots and condition the public to lockdowns and distancing, the majority of the international public is still largely skeptical. Without a doubt there are those who have bought into the narrative and are living their lives in fear of Omicron, but millions of people around the world have not swallowed the COVID insanity and will reject the new normal.
If Gates is sharing his predictions for 2022 perhaps it’s fair that we at TLAV make our own prediction. We foresee 2022 as the end of the COVID-19 crisis. Not because we vaccinated our way out of the problem, or because we silently accept restrictions on our freedoms. No, the COVID-19 crisis is coming to an end in 2022 because the people are waking up and they are no longer willing to submit in the name of political correctness or being polite. In 2022, the people of the world are taking control of their lives, rejecting the new normal and The Great Reset, and manifesting The People’s Reset.