Pfizer and the U.S. Food and Drug Administration last week failed to directly address questions by two media outlets about whether Pfizer’s Comirnaty vaccine is available in the U.S.
By
Seth Hancock 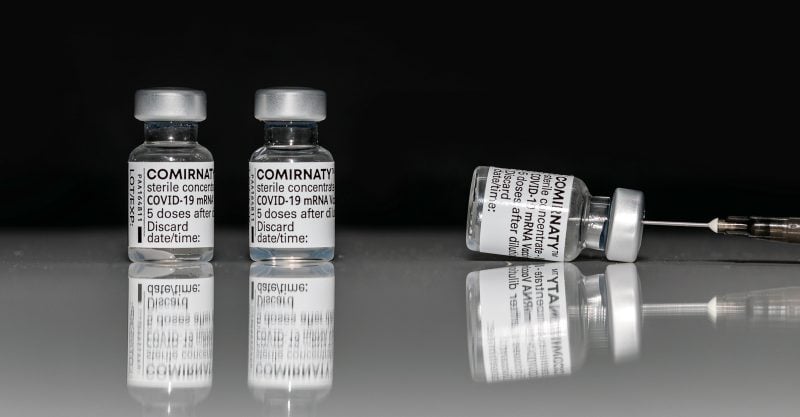 Miss a day, miss a lot. Subscribe to The Defender's Top News of the Day. It's free.
Two media outlets last week requested, but failed to obtain, clarity from Pfizer on whether its fully licensed Comirnaty COVID vaccine is available in the U.S.
Reporting by The Ohio Star and National File highlighted the ongoing debate over whether the vaccine can legally be mandated, and whether Pfizer can be held liable for injuries related to the vaccine.
The Star reported that despite asking multiple times whether the Comirnaty vaccine is in use, Pfizer would not answer the question.
The U.S. Food and Drug Administration (FDA) in August granted full approval, or Biological License Application Approval (BLA) — for the Comirnaty vaccine for individuals age 16 and older.
The approval, granted without a formal advisory committee meeting or public comments, prompted a number of questions including:

Seeking an answer to the latter question, The Star reached out to Pfizer, the FDA and to Ohio’s largest health system, OhioHealth.

BUY TODAY: Robert F. Kennedy, Jr.'s New Book — 'The Real Anthony Fauci'
A spokeswoman for OhioHealth confirmed the system’s 12 hospitals “are currently distributing the Pfizer vaccine that does not have the Comirnaty branding label.”
In response to whether the Comirnaty vaccine is being used elsewhere in the U.S., Pfizer told The Star in an email:
“The Pfizer-BioNTech COVID-19 Vaccine (EUA labeled product) is currently being shipped; however, please be advised that the COMIRNATY and the Pfizer-BioNTech COVID-19 Vaccine have the same formulation and can be used interchangeably. They are made using the same processes, and there are no differences between them in safety or effectiveness.”
Pfizer’s claim that the two vaccines can “be used interchangeably” is inconsistent with FDA statements, The Star said, citing an FDA Q&A page that states the two vaccines are “legally distinct.”
The FDA reaffirmed that distinction, telling The Star the “statutory authorities governing BLAs and EUAs are distinct and provide different legal requirements.”
The FDA “did not directly address” The Star’s initial question about the specific difference between Comirnaty and the EUA vaccine, or why Pfizer is not shipping Comirnaty if the formulas are “interchangeable.”
However, in a Dec. 9 notice of reissuance of the EUA for the original Pfizer vaccine to give booster shots to 16 and 17-year-olds, the FDA said:
“[a]lthough COMIRNATY (COVID-19 Vaccine, mRNA) is approved to prevent COVID-19 in individuals 16 years of age and older, there is not sufficient approved vaccine available for distribution to this population in its entirety at the time of reissuance of this EUA.”
The Star also reached out to Ohio Attorney General Dave Yost, asking if Ohio’s public universities are following the state’s law, HB 244, which prohibits public institutions from mandating a vaccine that is not fully approved.
Bethany McCorkle, Yost’s communications director, responded that HB 244 does not apply because “the FDA fully approved the vaccines.”
National File, following up on The Star’s reporting, also contacted Pfizer to ask if Comirnaty is in use. Pfizer told National File the “EUA-labeled product will still be shipped and usable until its expiry date.”
Pfizer did not respond to National File’s follow-up requests for additional clarification.

Urgent: 3 Ways to Help Stop Biden’s Vaccine Mandates
Comirnaty ‘not available at this time’
According to the Centers for Disease Control and Prevention (CDC), a chart showing the current procedural terminology description for the Comirnaty BLA-licensed vaccine states Comirnaty is “not orderable at this time.”
The current procedural terminology description includes a statement from Pfizer:
“At present, Pfizer does not plan to produce any product with these new NDCs (National Drug Code) and labels over the next few months while EUA authorized product is still available and being made available for U.S. distribution. As such, the CDC, AMA (American Medical Association), and drug compendia may not publish these new codes until Pfizer has determined when the product will be produced with the BLA labels.”
According to a Dec.16 letter from the FDA’s acting chief scientist, Jacqueline A. O’Shaughnessy, Pfizer-BioNTech vaccines exported from the U.S. are allowed only if “the regulatory authorities of the country in which the vaccine will be used are fully informed that this vaccine is subject to an EUA and is not approved or licensed by FDA.”
O’Shaughnessy’s letter states there is “a significant amount of Pfizer-BioNTech COVID-19 Vaccine that was manufactured and labeled in accordance with this emergency use authorization. The authorization remains in place with respect to the Pfizer-BioNTech COVID-19 Vaccine for this population.”
In a Twitter exchange last weekend, Rep. Thomas Massie (R-Ky.) cited O’Shaughessy’s letter to refute a tweet by Joe Gerth, a columnist for the Louisville Courier-Journal, who claimed Comirnaty is available.

Your first sentence, “Comirnaty is available in the US,” is false. Show us one location it’s available to prove otherwise. The FDA requires Pfizer to disclose to other countries BioNTech is “subject to an EUA and is not approved or licensed by the FDA.” https://fda.gov/media/150386/download 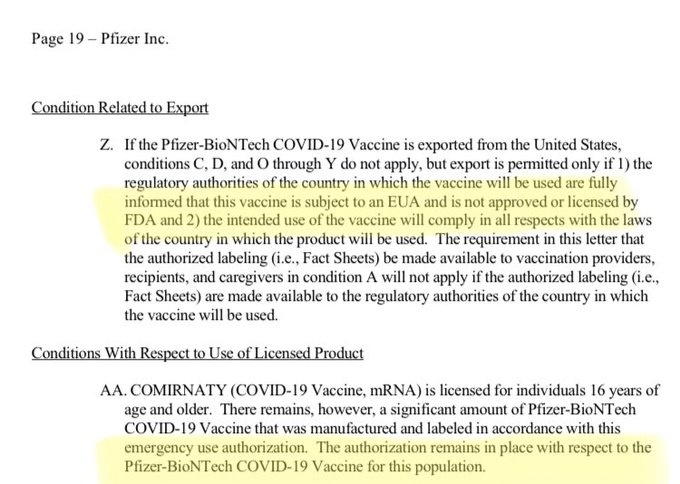 Replying to @Joe_Gerth
Comirnaty is available in the US. It’s the Pfizer vaccine. Pfizer simply rebranded the vaccine to be called “comirnaty.”

Can vaccines be ‘interchangeable’ and ‘legally distinct’ at the same time?
Misrepresentations by media and public officials — like those of the Louisville Courier-Journal and Ohio attorney general claiming the Pfizer vaccines in use in the U.S. are FDA-approved — coupled with the FDA’s own ambiguous documents and public statements have given rise to public confusion and legal questions.
Pfizer’s refusal to directly address questions posed by The Ohio Star and National File only adds to the lack of clarity. As political commentator and attorney Robert Barnes told The Star:
“It is an illicit bait and switch. There is no FDA-approved COVID-19 vaccine available in the U.S. The unavailable FDA biologic license approved drug is not medically identical and has to abide different manufacturing standards. As important, you have fewer legal rights and fewer legal remedies when you take an EUA drug than a biologic licensed drug. This directly impacts the legal rights of all Americans.”
The FDA’s assertion that the Comirnaty and Pfizer vaccines are “legally distinct” yet “interchangeable” is at the center of legal arguments around whether one, both — or neither — of the two vaccines can be mandated.

BUY TODAY: Robert F. Kennedy, Jr.'s New Book — 'The Real Anthony Fauci'
A lawsuit brought by members of the military against the U.S. Department of Justice (DOJ) challenging the DOJ’s COVID vaccine mandate for all service members highlights some of the arguments.
A federal judge on Nov. 12 denied plaintiffs’ request for a preliminary injunction against the DOJ mandates.
However, in his ruling, the judge stated — contrary to claims by Pfizer and the FDA — that the FDA-licensed Comirnaty vaccine is not interchangeable with Pfizer-BioNTech’s EUA-labeled vaccine.
Judge Allen Winsor of the U.S. District Court for the Northern District of Florida said the service members showed the U.S. Department of Defense (DOD) is requiring them to submit to EUA-labeled vaccines, yet “defense counsel could not even say whether vaccines labeled ‘Comirnaty’ exist at all.”
Judge Winsor wrote:
“In the DOD’s view, this is fine because the contents of EUA-labeled vials are chemically identical to the contents of vials labeled ‘Comirnaty’ (if there are any such vials). According to the DOD’s argument, this means servicemembers are not required to accept ‘a product authorized for emergency use.’ …
“Rather, the DOD argues that once the FDA licensed Comirnaty, all EUA-labeled vials essentially became Comirnaty, even if not so labeled. Thus, the DOD argues, the ‘product’ injected is a chemical formulation that has received full FDA licensure — not merely an EUA.”
Judge Winsor called that argument “unconvincing.”
The distinction between an EUA product and one that is fully licensed raises other legal questions. For instance, the FDA fact sheet on the Comirnaty vaccine states:
“This EUA for the Pfizer-BioNTech COVID-19 Vaccine and COMIRNATY will end when the Secretary of HHS determines that the circumstances justifying the EUA no longer exist or when there is a change in the approval status of the product such that an EUA is no longer needed.”
The statement appears to suggest the Pfizer-BioNTech and Comirnaty vaccines are EUA, and that both EUAs will end under the conditions noted.
Another key difference between fully licensed and EUA vaccines relates to the issue of liability. Under the 2005 Public Readiness and Preparedness Act (PREP Act), EUA vaccines are accompanied by a far-reaching liability shield that protects all parties involved with the product from lawsuits.
Specifically, if one is injured by an EUA vaccine, the only way to claim damages and receive compensation is to apply to the Countermeasures Injury Compensation Program, an administrative process under the U.S. Department of Health and Human Services (HHS), which authorized the vaccines.
At this time, the Pfizer Comirnaty vaccine may have no liability shield, making it subject to product liability laws that allow those injured by it to potentially sue for damages, although Pfizer asserts the vaccine is protected under the PREP Act as well.
Children’s Health Defense, following the Comirnaty approval, sued the FDA arguing the approval was a “bait in switch” to provide cover for vaccine mandates.