OUT OF MIND » BREAKING NEWS & HOT TOPICS » THE GREAT DIE OFF » Novavax: Soon to be FDA-Authorized COVID-19 Vaccine for the “Christian Pro-life” Population?

Novavax: Soon to be FDA-Authorized COVID-19 Vaccine for the “Christian Pro-life” Population?

Novavax: Soon to be FDA-Authorized COVID-19 Vaccine for the “Christian Pro-life” Population? 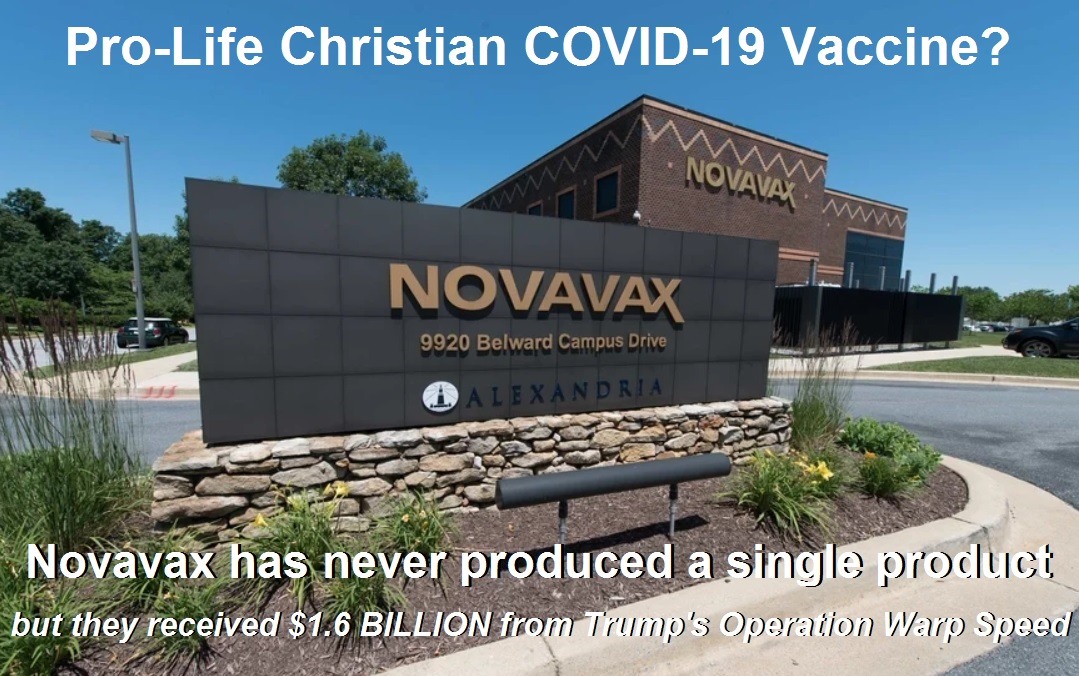 by Brian Shilhavy
Editor, Health Impact News
In July of 2020, when multiple pharmaceutical companies were competing for massive government funding to develop a “COVID-19 vaccine,” I published an article about one of the companies that had received massive amounts of funding from President Trump’s Operation Warp Speed program.
The name of the company is “Novavax,” and it received $1.6 BILLION from President Trump back in the summer of 2020, but for more than a year and a half the only thing this company produced were instant billionaires. They were among the many losers at the end of 2020 when the FDA chose Pfizer, and then Moderna and later J&J to authorize COVID-19 injections for the United States.
But at the end of 2021, Novavax was approved as a COVID-19 vaccine for distribution in Europe, and they are reported to be close to having the FDA grant an emergency use authorization for their COVID-19 shot for distribution here in the U.S.
The Right Wing Conservative news site Gateway Pundit recently featured this soon-to-be-FDA-authorized Novavax COVID-19 vaccine with the title:

The article portrays the Novavax vaccine as a “minimally tainted” vaccine, because:

Novavax was not developed using body parts of aborted babies. (Though, like all other vaccines currently available, Novavax is tainted with tests that involve fetal cells.) (Source.)

Honestly, nothing surprises me anymore, as we have reported many times that the Christian Church is thoroughly pro-vaccine and part of the Big Pharma Vaccine Cult, with many of them receiving government funding to become “vaccine clinics” and inject their church members with the Satanic COVID-19 gene-altering shots.
One Christian Church in Canada just announced that their members who refused the COVID-19 injections were no longer welcome.


Closing services to unvaccinated a ‘difficult decision’ for southeastern church

So a vaccine with only “minimal” fetal tissue cell contamination is welcome news for the Christian Right. Never mind that the company has never produced a single product before, and that their national headquarters in Alexandria, Virginia, appears to be patterned after a Freemason Masonic Temple (see image above) with Satanic symbols displayed, including an image of the “Lighthouse of Alexandria”:

The Lighthouse of Alexandria was reportedly originally built by the Greek Ptolemaic Kingdom of Ancient Egypt during the reign of Ptolemy II Philadelphus (280–247 BC), and was one of the Seven Wonders of the Ancient World until damaged by earthquakes.
A replica of this lighthouse was built by New York City architect Harvey Wiley Corbett, who later became famous for designing much of Rockefeller Center, at The George Washington Masonic National Memorial in in Alexandria, Virginia during the 1920s and 1930s. (Source.)
So it is obviously an important image to Freemasons.

Speaking as a doctor, McCullough said that he has looked at studies of a vaccine called Novavax that does not use mRNA technology but is antigen-based, and he’s very encouraged by it.
According to the pro-life Charlotte Lozier Institute, Novavax is not produced using cell lines derived from the cells of aborted children. It appears, however, that some tests of this vaccine have involved the controversial cell lines.
“I [saw] rates of vaccine effectiveness over 2 to 5 months of 90%,” McCullough stated, but he cautioned that the studies were carried out before the Delta variant became dominant. Nevertheless, he is still hopeful that Novavax could offer a “broader amount“ of protection and with less risk of vaccine injury.
“It would be my understanding as a doctor, that this could be less likely to have these internal organ effects that we’re seeing with the other vaccines.” (Source.)

Dr. McCullough is opposed to the current COVID-19 shots, and has been a strong advocate for early treatments that he states are more effective than the COVID-19 shots which are harming people.
But even though he has had success with early treatments, he apparently still believes that COVID-19 is a real virus that is dangerous, and that a vaccine is still needed.
He was interviewed by the Right Wing America Out Loud podcast on September 2, 2021, which did a COVID Q&A with him.
One of the listeners, at about the 40-minute mark, asked him this question:

“Please, Dr. McCullough, give your analysis of the Novavax COVID vaccine.
I’ve been waiting for this vaccine to be available in the U.S. I’ve studied how it works, and how it differs from the RNA tech vaccines now being offered.
My conclusion is that this will be a safe vaccine. I am not anti-vaxx, and I do want to be vaccinated for COVID.
What is your analysis of the Novavax?”

This was Dr. McCullough’s response:

I agree with that conclusion. I’m not anti-vaxx either. In fact, I’ve had two vaccines this year.
I traveled to India a couple of years ago. I got extra vaccines. I have no problem with vaccines.
The Novavax is protein-based vaccine. It would be the purified spike protein that’s made, ah, in a, ah, medicinal format, 5 micrograms, they picked a lower dose.
In the published studies in the Journal of Medicine, it was every bit as good as Pfizer and Moderna.
And a sore arm, maybe the arm is sore a bit, more sore than Pfizer or Moderna or J&J, but should be free from the systemic side effects. Should be free, certainly free of any genetic, uhm, manipulation in the human body.
And I can completely agree. We need to get Novavax sooner. It was supposed to be second quarter of 2021, which is now.
The FDA has delayed it. And I think many ought to think about just waiting. If they can ride it out for Novavax.

You can listen to the full podcast here. The Delta variant was making the news rounds when this was recorded, and Dr. McCullough stated that the Delta variant was “more dangerous” than the original COVID-19 virus.
But this contradicts what Dr. Michael Yeadon, Pfizer’s former Vice President and Chief Scientist for Allergy and Respiratory, has stated regarding variants of the COVID-19 virus. Dr. Yeadon states that variants are never more dangerous than the original virus. See: 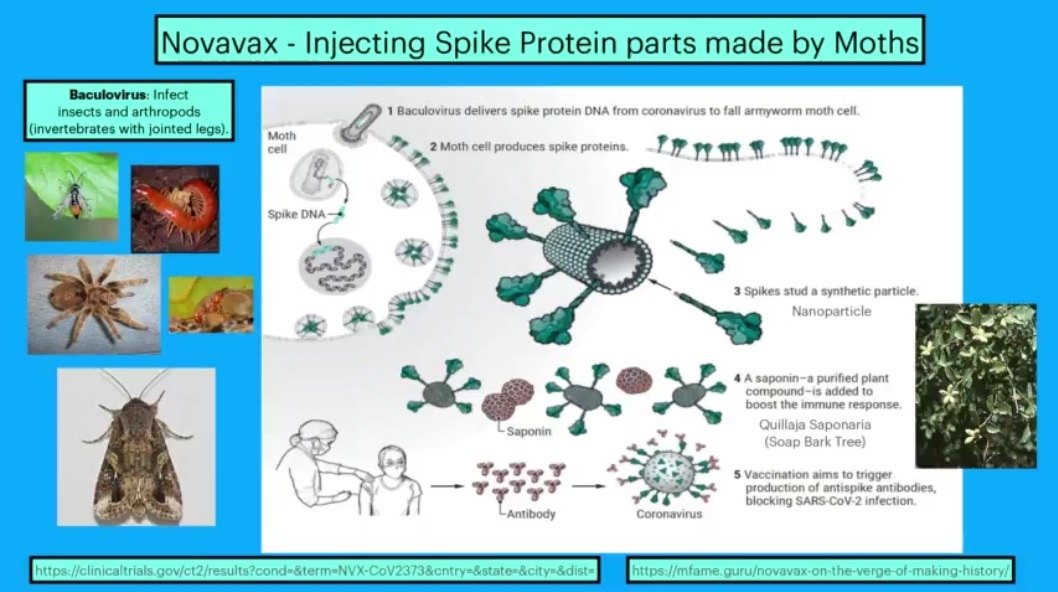 Another doctor who disagrees with Dr. McCullough is Dr. Richard Fleming, who is also an attorney.
Dr. Fleming was interviewed by Senior Editor Alex Newman of The New American on July 15, 2021. The title of the video is:

Fleming claims that Novavax is also a bioweapon, injecting a spike protein that has been cultured by moths. Dr. Fleming wants everyone who is involved in distributing these bioweapons prosecuted and brought to justice.
The image I have included above about Novavax is part of a slide presentation that Dr. Fleming uses during the interview.
You can watch the 30-minute video on Rumble.

OUT OF MIND » BREAKING NEWS & HOT TOPICS » THE GREAT DIE OFF » Novavax: Soon to be FDA-Authorized COVID-19 Vaccine for the “Christian Pro-life” Population?