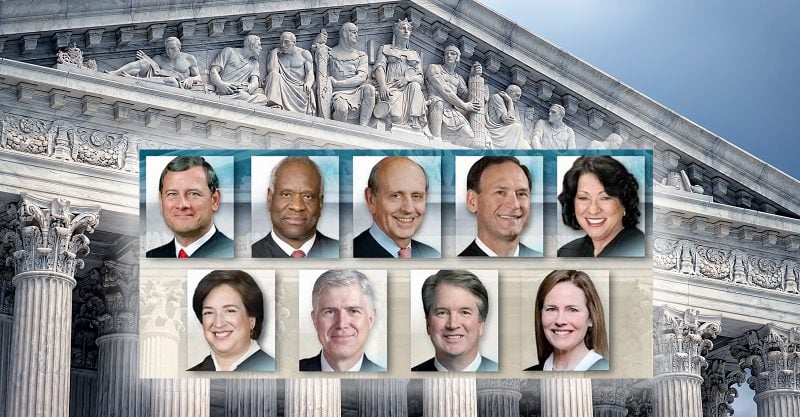 Miss a day, miss a lot. Subscribe to The Defender's Top News of the Day. It's free.
The U.S. Supreme Court today rejected the Biden administration’s mandate requiring employees of large businesses to be vaccinated against COVID or undergo weekly testing and wear a mask indoors while working.
The court’s conservative majority said the administration overstepped its authority by imposing the Occupational Safety and Health Administration’s (OSHA) vaccine-or-test rule on U.S. businesses with at least 100 employees.
At the same time, the court allowed to move forward a separate rule mandating COVID vaccines for workers in healthcare facilities that receive Medicare or Medicaid.
The Supreme Court on Jan. 7 heard oral arguments pertaining to both of the Biden administration’s COVID vaccine mandates. The focus of the hearing was whether to stay or to grant temporary injunctions requested by plaintiffs in a number of lawsuits challenging the emergency mandates for millions of Americans.
At the time, the rule issued by the U.S. Department of Health and Human Services’ Centers for Medicare & Medicaid Services (CMS), was stayed for 24 states that initiated lawsuits, but the OSHA stay was lifted by the 6th Circuit Court of Appeals.
The Supreme Court’s decision today reversed the lower court rulings, imposing a stay on the OSHA mandate and allowing the CMS rule to proceed.

BUY TODAY: Robert F. Kennedy, Jr.'s New Book — 'The Real Anthony Fauci'
Today’s rulings came three days after the OSHA’s Emergency Temporary Standard went into effect, targeting more than 84 million workers and two-thirds of the nation’s private-sector workforce.
The conservative justices wrote in an unsigned opinion:
“OSHA has never before imposed such a mandate. Nor has Congress. Indeed, although Congress has enacted significant legislation addressing the COVID–19 pandemic, it has declined to enact any measure similar to what OSHA has promulgated here.”
The conservative majority also expressed concerns over the implications of allowing OSHA to implement a widespread mandate without congressional authorization.
“Permitting OSHA to regulate the hazards of daily life — simply because most Americans have jobs and face those same risks while on the clock — would significantly expand OSHA’s regulatory authority without clear congressional authorization,” the opinion stated.
A majority of the Supreme Court’s justices concluded the applicants challenging OSHA’s mandate were likely to succeed in the merits of their claim and the secretary of labor lacked authority to impose the mandate, resulting in a stay while the case works its way through the 6th Circuit Court.
“Administrative agencies are creatures of statute,” the justices wrote. “They accordingly possess only the authority that Congress has provided.”
In a joint dissent of the OSHA ruling, the court’s three liberal justices argued the court was overreaching by substituting its judgment for that of health experts.
“Acting outside of its competence and without legal basis, the Court displaces the judgments of the Government officials given the responsibility to respond to workplace health emergencies,” Justices Stephen Breyer, Elena Kagan and Sonia Sotomayor wrote in a joint dissent.
The justices contended OSHA’s mandate is comparable to a fire or sanitation regulation imposed by the agency, while the majority said a vaccine mandate is strikingly unlike the workplace regulations that OSHA has typically imposed as a vaccination “cannot be undone at the end of the workday.”

SCOTUS allows CMS rule to move forward
In a separate opinion, the court allowed a rule issued by the U.S. Department of Health and Human Services’ Centers for Medicare & Medicaid Services, to take effect.
The mandate is estimated to affect 10.3 million healthcare workers in the U.S., but allows for religious and medical exemptions. The rule was previously blocked by two lower courts for the 24 states that challenged the rule.
The opinion stated:
“Vaccination requirements are a common feature of the provision of healthcare in America: Healthcare workers around the country are ordinarily required to be vaccinated for diseases such as hepatitis B, influenza, and measles, mumps, and rubella. As the Secretary explained, these pre-existing state requirements are a major reason the agency has not previously adopted vaccine mandates as a condition of participation.”
The opinion went on to suggest healthcare workers and public health organizations “overwhelmingly support” the CMS rule.
“Indeed, their support suggests that a vaccination requirement under these circumstances is a straightforward and predictable example of the […] regulations that Congress has authorized the Secretary to impose,” the opinion states.
Justice Samuel Alito, joined by conservative Justices Clarence Thomas, Neil Gorsuch and Amy Coney Barrett, dissented.
“Neither CMS nor the Court articulates a limiting principle for why, after an unexplained and unjustified delay, an agency can regulate first and listen later, and then put more than 10 million healthcare workers to the choice of their jobs or an irreversible medical treatment,” Justice Alito wrote.
“The challenges posed by a global pandemic do not allow a federal agency to exercise power that Congress has not conferred upon it. At the same time, such unprecedented circumstances provide no grounds for limiting the exercise of authorities the agency has long been recognized to have,” Justices Alito and Thomas wrote, stating the “latter principle governs” in the healthcare cases.
Mary Holland, president of Children’s Health Defense (CHD) said in an email to The Defender:
“CHD is delighted to see that the Supreme Court, 6-3, has upheld the preliminary injunction in the OSHA case, deciding that the administration lacked the authority to impose a COVID injection mandate on corporations with more than 100 employees.
“We are concerned, however, that the Supreme Court upheld the administration’s CMS mandate for healthcare workers. This mandate of an experimental, unapproved pharmaceutical product with only an ‘Emergency Use Authorization’ designation violates federal law and the Nuremberg Code, prohibiting coercion for participation in experimental medicine. We will continue to fight for true informed consent for all people.”
Scientists submit brief to SCOTUS on ineffectiveness of COVID vaccines
Drs. Luc Montagnier, co-winner of the 2008 Nobel Prize in Medicine, Harvey Risch, a Yale Professor of Epidemiology and Robert Malone, co-inventor of mRNA concepts and processes used in the existing COVID vaccines filed two briefs (first brief, second brief) as amici curiae in support of the applicants’ application for a stay or preliminary injunction of the OSHA and CMS mandates.
The briefs were designed to “highlight critical facts concerning Omicron — facts not addressed in the administrative record,” while “correcting an important false statement of fact in an amicus brief submitted by the American Medical Association et al. so that the court is not led into error.”
In their briefs, Montagnier, Rische and Malone argued neither OSHA nor CMS did any analysis of vaccine effectiveness against the COVID virus as it now exists and there is no evidence to suggest vaccination “will curb the spread of the virus we now face.”