More madness out of Australia.How can the Land Down Under possibly sink any lower?

Source: Adan Salazar
Footage out of Queensland, Australia, shows Covid patrols are literally rounding people up and taking them to jail for refusing to say whether they’re vaccinated or not.
In one video going viral on social media this week, Queensland cops are seen attempting to forcibly push an elderly woman who’s just exited Hervey Bay Coffee into the back of a paddy wagon.

Queensland, reportedly Hervey Bay. Arrested for not revealing her vaccination status. Qld Cops were arseholes during Campbell Newman's VLAD days, and they have not changed, once a cop, always a cop. 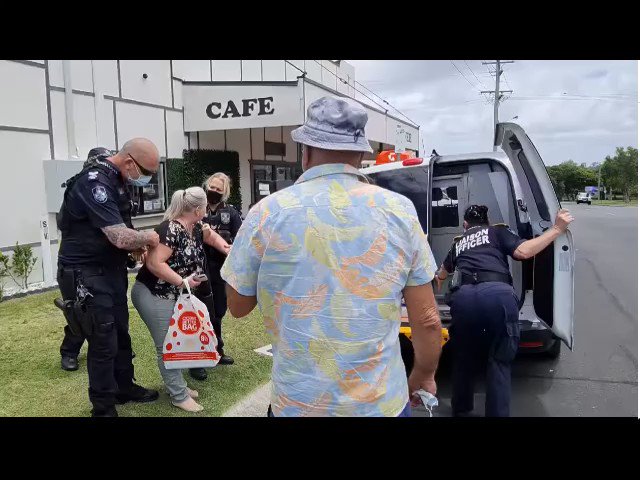 One cop explains she’s being arrested for refusing to show them her “certificate.” Later another officer claims she’s being arrested for “obstructing justice.”
“I’m happy to show you my information,” the woman pleads with the officers, who at this point are refusing to listen to any explanation. “I’m happy to provide my name and address,” she begs helplessly.
“Disgusting, I’m embarrassed to be an Australian,” the man filming the altercation says.

Explaining the situation on Facebook, the owner of the Cafe, Matt Straight, who also filmed the incident, described “5 disgusting individuals in police uniform” entering his business and interrogating him “as to whether I’m allowing unvaxxed people dine at my establishment and then proceed to check all guests and arrest this lovely lady just because she wouldn’t show her medical records to them.”

“This Lady peacefully left the cafe when the police entered and waited outside,” Straight added. “It wasn’t until the police finished checking all patrons that all 5 focused on her and insisted she show her vaccination status. She politely said she would provide her name and address but declines sharing her medical records. They pushed and pushed to try get her to hand over her phone and when she refused, they said she is under arrest. We asked for what? There is nothing in the mandate that says you can be arrested for not showing, but says you can be made to leave a venue. Which she did on her own accord. They said she is obstructing justice.”
Activists on social media are urging people to let their opinions be known regarding the arrest to the Hervey Bay police.

» Children Band Together to Stop the Cops from Hauling an Innocent Elderly Woman Off to Jail
» Elderly Man Called 911 Because He Was Hungry, So These Cops Did Something Unexpected…
» Watch How Cops Ruined This Woman's Life With ONE False Arrest
» Chicago cops Taser 8-month pregnant woman for parking violation
» Citizens Swarm Cops Arresting Woman for Being On Beach — Force Them to Stand Down