A team of physicists from the United States and China has detected the unexpected signatures of strange metallicity in a material in which electrical charge is carried not by electrons, but by more ‘wave-like’ entities called Cooper pairs. 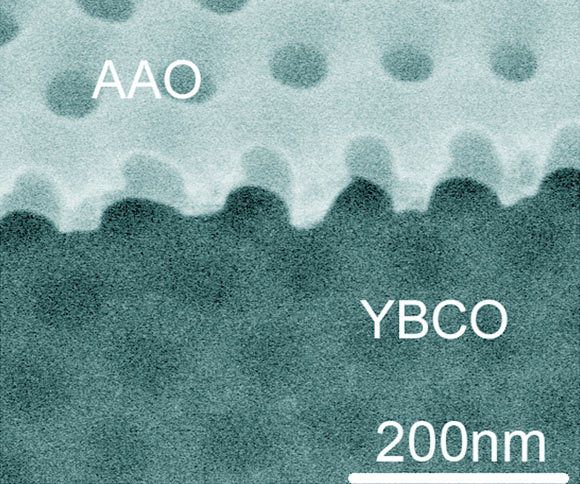 Scanning electron microscopy image of a nanopatterned YBa2Cu3O7−δ (YBCO) thin film. The 12-nm-thick nanopatterned YBCO thin film was fabricated by reactive ion etching through an anodic aluminium oxide (AAO) membrane directly placed atop the YBCO. By RIE, the anodized aluminium oxide pattern of a triangular array of holes with ~70-nm diameter and ~103-nm period was duplicated onto the YBCO film. Image credit: Yang et al., doi: 10.1038/s41586-021-04239-y.
Strange metals, also known as non-Fermi liquids, are a class of materials that do not follow the traditional electrical rules.
Their behavior was first discovered around 30 years ago in materials called cuprates.
These copper-oxide materials are most famous for being high-temperature superconductors, meaning they conduct electricity with zero resistance at temperatures far above that of normal superconductors.
But even at temperatures above the critical temperature for superconductivity, cuprates act strangely compared to other metals. As their temperature increases, cuprates’ resistance increases in a strictly linear fashion.
In normal metals, the resistance increases only so far, becoming constant at high temperatures in accord with what’s known as Fermi liquid theory.
Resistance arises when electrons flowing in a metal bang into the metal’s vibrating atomic structure, causing them to scatter.
Fermi-liquid theory sets a maximum rate at which electron scattering can occur. But strange metals don’t follow the Fermi-liquid rules, and no one is sure how they work.
What physicists do know is that the temperature-resistance relationship in strange metals appears to be related to two fundamental constants of nature: Boltzmann’s constant, which represents the energy produced by random thermal motion, and Planck’s constant, which relates to the energy of a photon.
“To try to understand what’s happening in these strange metals, people have applied mathematical approaches similar to those used to understand black holes,” Dr. Valles said.
“So there’s some very fundamental physics happening in these materials.”
In recent years, Dr. Valles and his colleagues have been studying electrical activity in which the charge carriers are not electrons.
In 1952, Nobel Laureate Leon Cooper discovered that in normal superconductors, electrons team up to form Cooper pairs, which can glide through an atomic lattice with no resistance.
Despite being formed by two electrons, which are fermions, Cooper pairs can act as bosons.
“Fermion and boson systems usually behave very differently. Unlike individual fermions, bosons are allowed to share the same quantum state, which means they can move collectively like water molecules in the ripples of a wave,” Dr. Valles said.
In 2019, the researchers showed that Cooper pair bosons can produce metallic behavior, meaning they can conduct electricity with some amount of resistance.
That in itself was a surprising finding because elements of quantum theory suggested that the phenomenon shouldn’t be possible.
For this latest research, the scientists wanted to see if bosonic Cooper-pair metals were also strange metals.
They used a cuprate material called yttrium barium copper oxide patterned with tiny holes that induce the Cooper-pair metallic state.
They then cooled the material down to just above its superconducting temperature to observe changes in its conductance.
They found, like fermionic strange metals, a Cooper-pair metal conductance that is linear with temperature.
“It’s been a challenge for theoreticians to come up with an explanation for what we see in strange metals,” Dr. Valles said.
“Our work shows that if you’re going to model charge transport in strange metals, that model must apply to both fermions and bosons — even though these types of particles follow fundamentally different rules.”
The new results appear in the journal Nature.
_____
C. Yang et al. 2022. Signatures of a strange metal in a bosonic system. Nature 601, 205-210; doi: 10.1038/s41586-021-04239-y