A Republican Senator from Kansas is taking aim at the secrecy surrounding the financial records of White House coronavirus adviser Dr. Anthony Fauci, which despite Fauci’s claims to the contrary remain largely hidden from public view.

GOP Sen. Roger Marshall of Kansas will introduce the Financial Accountability for Uniquely Compensated Individuals Act, or FAUCI Act, due to his concerns about the lack of transparency regarding Fauci’s records, according to The Hill.


The FAUCI Act would require the Office of Government Ethics website to list the pay and perks for administration officials such as Fauci, director of the National Institute of Allergy and Infectious Diseases. The agency also would be required to provide a list of those paid by the government whose financial records are not public.
The proposed legislation is an outgrowth of Marshall’s clash with Fauci during a Senate hearing Tuesday in which Marshall criticized both Fauci’s $434,000 salary and the billions of dollars in federal research grants his agency awards with little fanfare or scrutiny, according to Politico.
“As the highest-paid employee in the entire federal government, would you be willing to submit to Congress and the public a financial disclosure that includes your past and current investments?” Marshall asked, noting that federal Centers for Disease Control and Prevention Director Rochelle Walensky discloses her investments, as do members of Congress.
“All you have to do is ask for it,” Fauci said. “You’re so misinformed, it’s extraordinary.”
Marshall said Fauci has inside knowledge that could benefit the doctor.
“There’s an air of appearance that maybe some shenanigans are going on,” Marshall said, adding that he believes such “is not the case.”
Fauci said the information Marshall seeks “is totally accessible to you if you want it.”
“We look forward to reviewing it,” Marshall said as Washington Democratic Sen. Patty Murray, chairwoman of the Senate Health, Education, Labor, and Pensions Committee, cut off the exchange between Marshall and Fauci.
Then came the hot-mic comment that raised Marshall’s ire.
“What a moron,” Fauci said softly, according to multiple outlets. “Jesus Christ.”
Marshall later issued a statement.
“Calling me a moron during a Senate hearing may have alleviated the stress of the least trusted bureaucrat in America, but it didn’t take away from the facts,” Marshall said.
Department of Health and Human Services spokesman Ian Sams then criticized Marshall for criticizing Fauci, according to Politico.
“At a time when America is seeing rising COVID cases,” Sams said, “it’s disappointing and frankly unacceptable that Republican Senators chose to spend a hearing with the country’s leading public health experts spreading conspiracy theories and lies about Dr. Fauci, rather than how we protect people from COVID-19.”

I caught Fauci in another lie yesterday. Here’s my conversation with @IngrahamAngle about America’s least trusted bureaucrat: 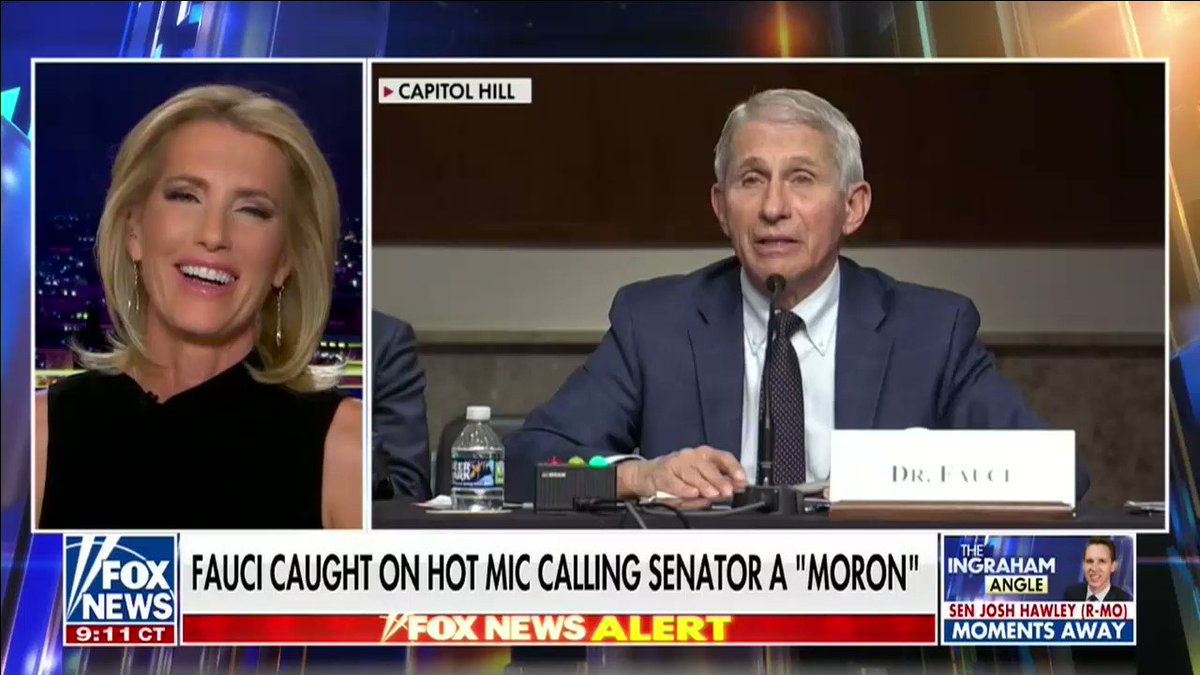 Andrzejewski said existing public records available online do not show Fauci’s pay for any time since the 2020 federal fiscal year, which ended Sept. 30, 2020.
“It’s not public what stocks and bonds Dr. Fauci bought and sold in 2020 or 2021, as he influenced Covid policies,” Andrzejewski wrote.
“It’s not public what Fauci received – or didn’t receive – in royalties. (There are up to 1,000 current and former NIH scientists receiving royalties.) Each payment could be a potential conflict of interest.
“Yes, all this information resides with the National Institutes of Health (NIH), but isn’t ‘public knowledge,’ despite Dr. Fauci’s claims otherwise.”
Andrzejewski noted that vast amounts of information on Fauci – about 1,200 pages — remain in the hands of the National Institutes of Health despite a Freedom of Information proceeding by the nonprofit group Judicial Watch to kick loose the facts.