TRENDING: Parents Horrified as School Hosts ‘SATAN Club’ For Children
A tsunami warning has been issued for Australia after an undersea volcano in the Pacific Ocean caused havoc in Tonga.
The Joint Australian Tsunami Warning Centre issued an urgent alert that dangerous waves will start to affect Australia from 9.45 pm on Saturday and that residents should move back from the water’s edge.
Residents on Lord Howe Island, 780km east of Sydney, have been told to evacuate as the tsunami bears down on the offshore territory.
Terrified locals were forced to flee for their lives in Tonga as a surging tsunami wave crashed into homes and volcanic ash rained down from the sky.
Residents were warned to get out of the water and move to higher ground from as far away as Fiji as homes in the small South Pacific nation were swept away by the rising torrent.
Australia joined Tonga, New Zealand, Fiji, and American Samoa in issuing tsunami warnings after the ‘violent’ eruption of the Hunga-Tonga-Hunga-Ha’apai volcano, 30km from the Tongan archipelago.
The undersea volcanic eruption was visible from space and triggered a 7.4 magnitude earthquake.
The Australian warning was for a vast stretch of coastline from southern Queensland to Tasmania with the threat to the mainland centered around waterways where coastal flooding could occur.
But The Bureau of Meteorology said evacuations on the Australian mainland are ‘not necessary’. 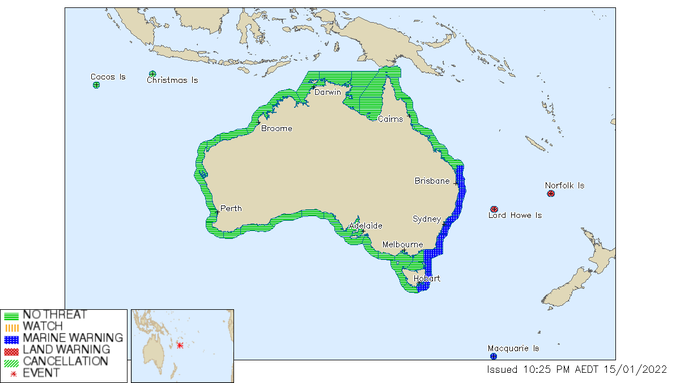 All NSW coastal areas are on alert, along with Sandy Cape to Point Danger in southern Queensland, Lakes Entrance to 60 nautical miles east of Gabo Island in Victoria, and from the Northern Tip of Flinders Island to South East Cape in Tasmania.
Several Australian offshore territories are under a more serious threat, with Lord Howe Island residents, 780 km east of Sydney, issued an evacuation order at 10:26 pm.
‘People are advised to move to the closest Evacuation Assembly Area: Corner of Anderson Road and Middle Beach Road, if on the northern end of the island, or the Golf Club House Carpark if on the southern end of the island,’ BoM said in an alert.
Norfolk Island and Macquarie Island are facing ‘land warnings’ meaning residents are advised to get 1km away from the coast.’
‘People inland warning zones are strongly advised to move 1 kilometer inland or go to high ground at least 10 meters above sea level,’ a BoM statement read.
On the Australian mainland, people are advised to not enter the water.
A ‘violent’ underwater volcanic eruption at 5.10 pm local time on Saturday was confirmed as the cause of the tsunami, which overwhelmed homes, buildings, fences, roads, and cars in Tonga around 20 minutes afterward.

Tonga's Hunga Tonga volcano just had one of the most violent volcano eruptions ever captured on satellite. 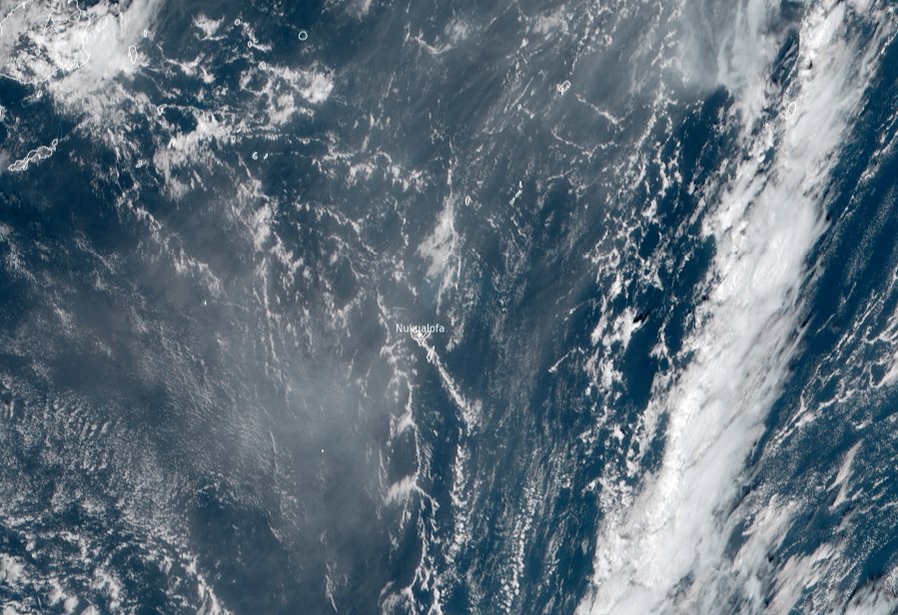 Emergency warnings in Tonga ordered locals to move urgently to higher ground.
The Hunga-Tonga-Hunga-Ha’apai volcano erupted on Friday sending debris, ash, and gas 20 kilometers into the air.
The eruption plunged the nation’s main islands into darkness on Friday.
But the chaos on Saturday came from a second much larger eruption.
It is located about 30 kilometers south-east of Fonuafo’ou island in Tonga and has erupted several times in recent weeks.

The eruption also led to tsunami warnings for Fiji and American Samoa, which are 804 and 936 kilometres away from Tonga.
In Fiji the Mineral Resources Department warned people to ‘stay out of the water and away from beaches’.
One man wrote on social media, ‘We live in Kolomotu’a near the ocean so we have left already and we are in our cars heading out but traffic on every road.’
‘Please pray for us as a family and safety.’
An American stormwatchers group called the footage, which quickly went viral online, ‘one of the most violent volcano eruptions ever captured on satellite’.