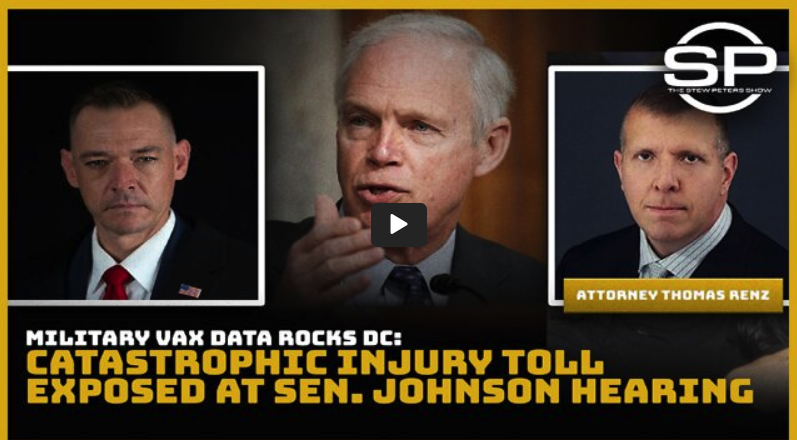 
Fresh off his bombshell panel discussion with Sen Ron Johnson, attorney Thomas Renz joins Stew Peters to discuss data from the DoD’s medical records, which show how soldiers who were perfectly healthy are now battling heart problems, how there’s been a nearly 300% increase in miscarriages, a nearly 300% increase in cancer and an over  1000% increase in neurological damage reported as vaccine side effects.
All for a virus which posed zero risk to soldiers at the peak of their youth and health.
The DoD’s medical records have been considered the most complete and the most accurate data that you can get, due to the highly-controlled conditions of the military, itself – until after Renz’ testimony.

Neuropathy (Nerve Pain)? Do This Immediately

Wisconsin Doctors Stunned - Do This Every Morning & Drop Stubborn Pounds

Assisted Living
He says his team was able to download a lot of data until yesterday, when they found that the database was offline – and this was after they had just seen how the data on myocarditis had been manipulated!
Renz directly addresses those who would manipulate the DoD’s medical records:
“Let me just go on record and tell you this: first of all, we’ve got copies, including physical copies of this data and I’ve got it all over the country, so you can’t get it; you can’t wipe it out, it’s out there. Second of all, that data, we’ve got…data from different points of time, that indicate where and when it’s been changed, so go ahead.

“You guys try and cover this up, you’re going to dig your hole deeper. My suggestion for anybody that’s involved in this is that it’s time to come clean. Testify and ask for forgiveness, rather than permission. You guys need to really come clean, you need to think about this…
“We have a lot more coming that’s equally Earth-shattering.
“This Cabal, this crooked, corrupt nightmare is going to end. We’re going to end it. And I can’t wait – can’t wait – to see these guys brought to justice. They’ve murdered our soldiers, they’ve murdered our children. They’re going down.”

Renz says he has enough data now for the courts to take this seriously, saying they’ve got a lot of basis to include members of the Mainstream Media in the Collusion case that his team will be pursuing and which he vows to take to the end.