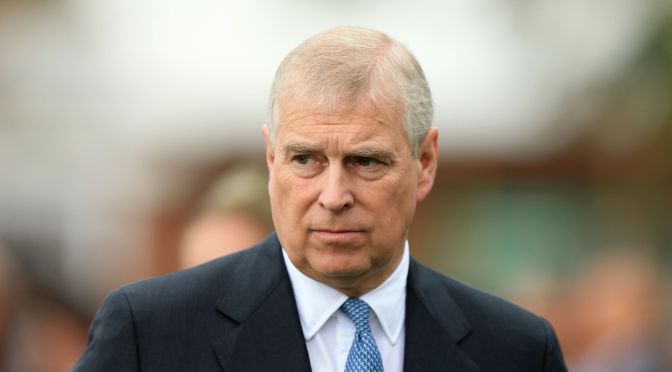 Prince Andrew’s lawyers on Wednesday demanded a trial by jury in the U.S. District Courts as he prepares to answer sexual assault allegations brought by Virginia Giuffre.
Andrew’s trial by jury plea comes just two weeks after Judge Lewis A Kaplan of the United States District Court for the Southern District of New York denied his request to have the entire case dismissed.
Alongside the jury request, Andrew has also sought to have the case dismissed – again.
The Prince’s lawyers have justified their decision to request a jury trial and repeated calls for dismissal by suggesting Giuffre’s allegations lack solid “facts” and are “too speculative” to warrant any financial compensation from Andrew, UPI reports.

Queen Strips Prince Andrew of All Military Titles and Patronages

The Prince’s lawyers also suggested that Giuffre’s “prayer” for “exemplary” or “excessive” “punitive damages” is “unconstitutional” as this is “barred” by the “due process clause of the Fourteenth Amendment”.
In the submitted court documents the Queen’s son once again denied “that he ever engaged in sexual acts with Giuffre” and declined to answer most of her other allegations.
A portrait of Prince Andrew outside The Duke of York pub on January 16, 2022 in London, England. On Thursday, Buckingham Palace announced Prince Andrew would shed his military titles and patronages after a U.S. court allowed a lawsuit by Virginia Giuffre, who alleges Andrew raped her when she was 17, to proceed. (Hollie Adams/Getty Images)
These include topics such as his relationship with paedophile billionaire Jefferey Epstein – claiming the Prince “lacks sufficient information to admit or deny the allegations”.
Previously Andrew has suggested Giuffre is suffering from “false memories” in regards to her claim of him sexually assaulting her when she was 17 in 2001. Andrew has also accused Giuffre of highlighting her claimed trauma in order “to deflect” from the role the Prince accuses her of having in “Epstein’s sex-trafficking scheme”.

A previously sealed 2009 $500,000 lawsuit settlement between Jeffrey Epstein and a woman that is suing Prince Andrew was made public.

The disgraced Prince has also challenged the motivations behind Giuffre’s allegations against him and suggested she is simply seeking another “payday”, using the $500,000 Giuffre obtained in a 2009 settlement with Epstein as evidence of this.
Currently, Andrew has not been charged with any criminal offences and if the case is not dismissed will face Giuffre in the U.S. civil courts.
He has always maintained his innocence of all charges.