Thousands Pour Into Ottawa Amplifying the Voice of Protest Around the Capital Mon Feb 14, 2022 10:03 am

Thousands Pour Into Ottawa Amplifying the Voice of Protest Around the Capital
February 14, 2022 by 1EarthUnited


By Richard Moore February 12, 2022 Updated: February 13, 2022
OTTAWA—The center of Canada’s capital city, Ottawa, was flooded by thousands of protesters on Feb. 12 demanding an end to COVID-19 mandates and restrictions.
Many more joined the ongoing trucker-led protest with the arrival of the weekend. Numbers grew from the night of Feb. 11 into the next morning as supporters seemingly poured into the city.
Greater masses of people were particularly noticeable on Parliament Hill and then later on the streets, where they spilled out from the immediate vicinity of the truck blockade. 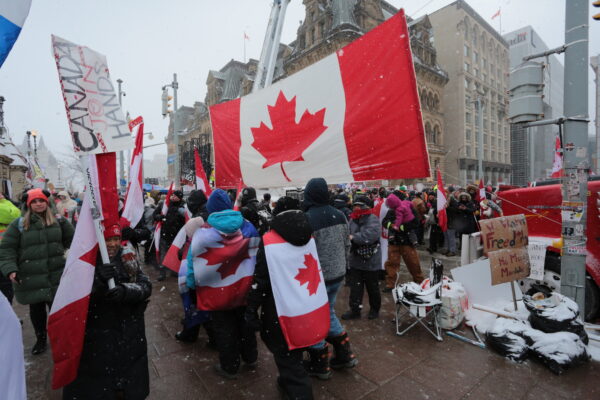 influx of newcomers swelled the ranks of anti-mandate protesters in the Canadian capital of Ottawa on Feb. 12, 2022. (Richard Moore/The Epoch Times)
Around 10 a.m., several thousand protesters were marshaled into groups to form the word “freedom.”
Then, they waved their red and white maple leaf flags and sang the national anthem “O Canada” with passion and rousing volume.
On finishing, they burst into loud cheering and the maple leaves waved again.
The effort helped rouse the spirits of the protesters on what was a very cold winter’s day, as the morning temperature was on its way down to -10 degrees Celsius (14 degrees Fahrenheit) and snow was being whipped around in the air by a gusty wind. 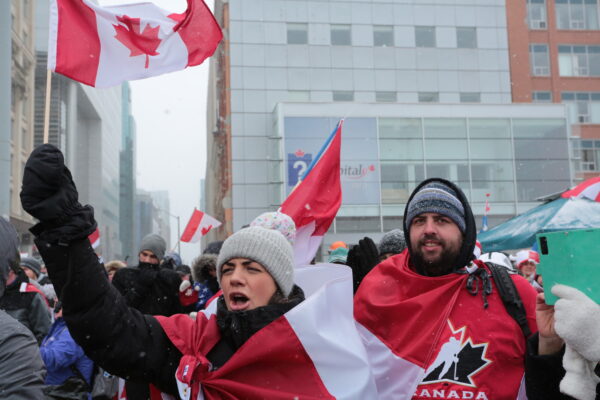 Protesters enjoying the music played during the blockade on Feb.12, 2022, in Ottawa, Canada. (Richard Moore/The Epoch Times)
Denis Cadieux, a carpenter from Orleans, told The Epoch Times that he liked almost everything about the protests and the way people had behaved.
If there were one thing he would change, it would be to cut out the negative signs and messages.
“They make us sound violent,” he said.
Cadieux said the main phrase he didn’t like was the one that said, “[Expletive] Trudeau.”
“Trudeau is a human being like anybody,” he said. “He makes mistakes and, unfortunately, he is making such a big mistake he needs to step down. And that we understand, but we cannot hate him for that. Hate is a big word.”
Cadieux went on and said, “I think we all need to be respectful of everybody. I respect Trudeau for what he did. But for us, it doesn’t work and he needs to step down. But take down the signs. As supporters, we need to take [expletive] out of the equation.” 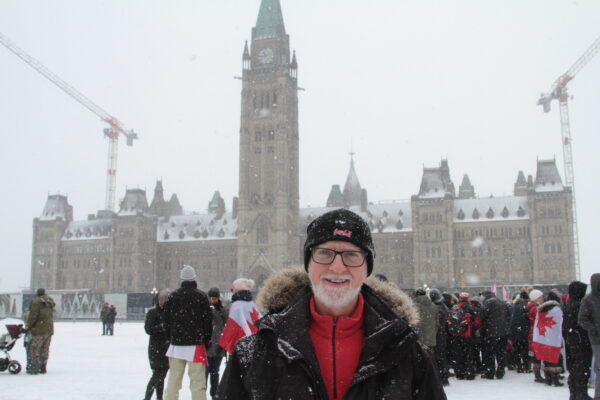 Denis Cadieux supports the Ottawa protests but would like to remove some negative messages, photo taken on Feb. 12, 2022. (Richard Moore/The Epoch Times)
And there were other things Cadieux saw that he rated as negative.
“This morning, I saw a video of gentleman who is against the truckers. What I didn’t like about the supporters was that instead of being positive, they were burying him with chanting ‘Freedom, freedom.’
“The poor man was overridden by these people and that was negative. So now, we are losing viewers as well.
“If we had treated this gentleman with dignity and honest, respect, he would probably have said, ‘OK, well they were nice.’ Instead we lost that gentleman for good.”
But overall, Cadieux said he expected that protesters will win people over by the way they behaved. 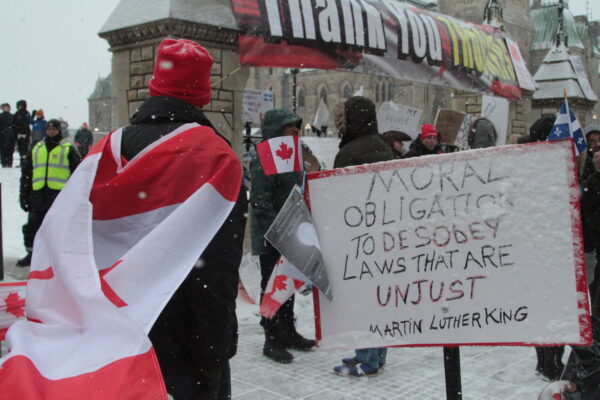 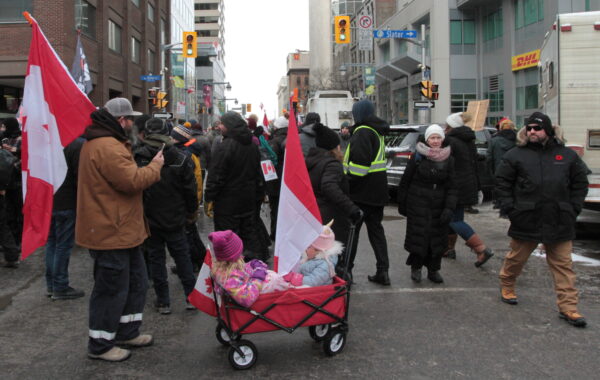 Children at the protest in Ottawa, Canada, on Feb. 12, 2022. (Richard Moore/The Epoch Times)
“We won’t win everybody, but honestly, I think this is great.”
He added that Prime Minister Justin Trudeau and “the mainstream news had made it sound like we are disrupting the economy, but actually, it is their delays in not sitting down to speak with us that are disrupting the economy.” 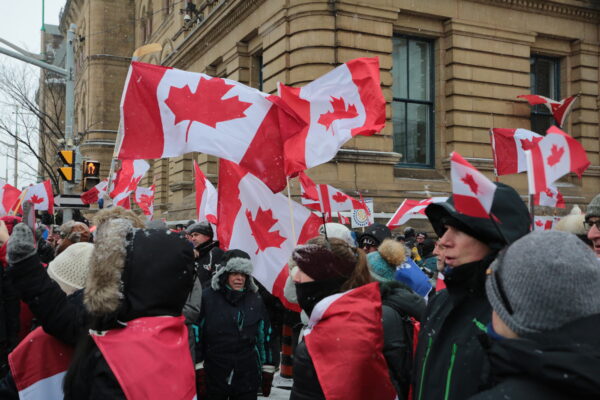 Protesters in Ottawa, Canada, on Feb. 12, 2022. (Richard Moore/The Epoch Times)
The mass gathering on Feb. 12 had a carnival atmosphere along Wellington St., near Parliament Hill, and spirits were sent soaring as people stood and sang along in unity with a very well received song list.
Speeches were made throughout the day, during which key words and phrases—such as freedom—earned cheers and whistles from the packed-in crowd.
Regular cries of “Freedom” were screamed out and answered in similar fashion, while vehicles with national emblems fluttering above their flatbeds honked their horns as they cruised the snow-covered streets. 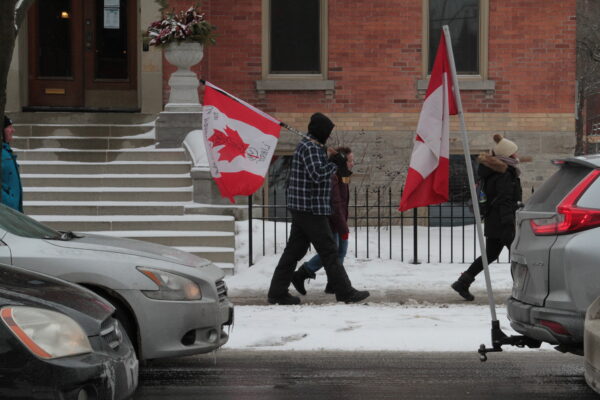 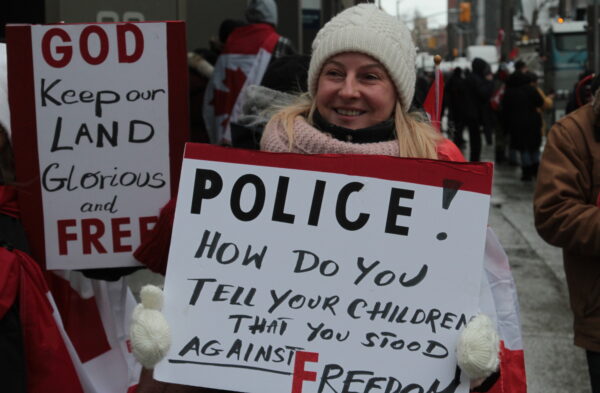 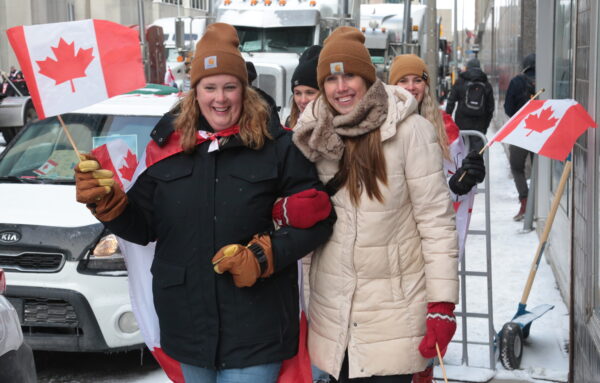 At one restaurant at the edge of the city center, a small group with a Canadian flag came in without masks and were asked for proof of vaccinations. They didn’t have them and were told they could not be served.
“We didn’t want to eat here anyway,” one said as they left.
The server said of the protest and the situation, “This is killing our business.”
Less than a month ago, they had eight servers. “Now, we have two.”
The eatery has been very careful about taking COVID-19 restrictions seriously. But just two weeks ago, they were reported for not checking for a woman’s vaccination card. She was a regular customer who had left her card at home.
A customer reported the incident and the restaurant was fined $1,000.