Source: Zero Hedge
Update (1935ET): The Canadian Civil Liberties Association has condemned PM Justin Trudeau for invoking the Emergencies Act, claiming in a Monday tweet that the Canadian federal government “has not met the threshold necessary” to do so.
“The Emergencies Act can only be invoked when a situation “seriously threatens the ability of the Government of Canada to preserve the sovereignty, security and territorial integrity of Canada” & when the situation “cannot be effectively dealt with under any other law of Canada,” the twitter thread continues.

The federal government has not met the threshold necessary to invoke the Emergencies Act. This law creates a high and clear standard for good reason: the Act allows government to bypass ordinary democratic processes. This standard has not been met. 1/3
6:36 PM · Feb 14, 2022

The federal government has not met the threshold necessary to invoke the Emergencies Act. This law creates a high and clear standard for good reason: the Act allows government to bypass ordinary democratic processes. This standard has not been met. 1/3

The Emergencies Act can only be invoked when a situation "seriously threatens the ability of the Government of Canada to preserve the sovereignty, security and territorial integrity of Canada" & when the situation "cannot be effectively dealt with under any other law of Canada."
6:36 PM · Feb 14, 2022

Don’t worry, @JustinTrudeau isn’t “calling in the military”. He is just authorizing banks to unilaterally freeze your accounts on the basis of suspicion alone, no court order required, with legal immunity. I hope everyone realizes how much more dangerous this is than the military
4:15 PM · Feb 14, 2022

“This is not a peaceful protest,” the Canadian leader told reporters in Ottawa alongside top cabinet officials. “The federal government is stepping in because local police authorities have had difficulty enforcing the law,” he said.
“This is about keeping Canadians safe, protecting people’s jobs and restoring confidence in our institutions.”

Enacting the new never-before-used law gives Trudeau, in effect, martial law control over everything and everyone; and not all of Canada is behind him…

His first act, it appears, was to choke off any funding for the protesters by broadening its anti-money-laundering rules to cover crowdsourcing sites, threatening them with financing “terrorism”.

“We are broadening the scope of Canada’s anti-money laundering and terrorist financing rules so that they cover Crowd Funding Platforms and the payment service providers they use,” Finance Minister Chrystia Freeland said.
“This is about following the money. This is about stopping the financing of these illegal blockades.”

Canada authorizes banks and financial institutions to “temporarily cease providing financial services where the institution suspects that an account is being used to further the illegal blockades and occupations.” 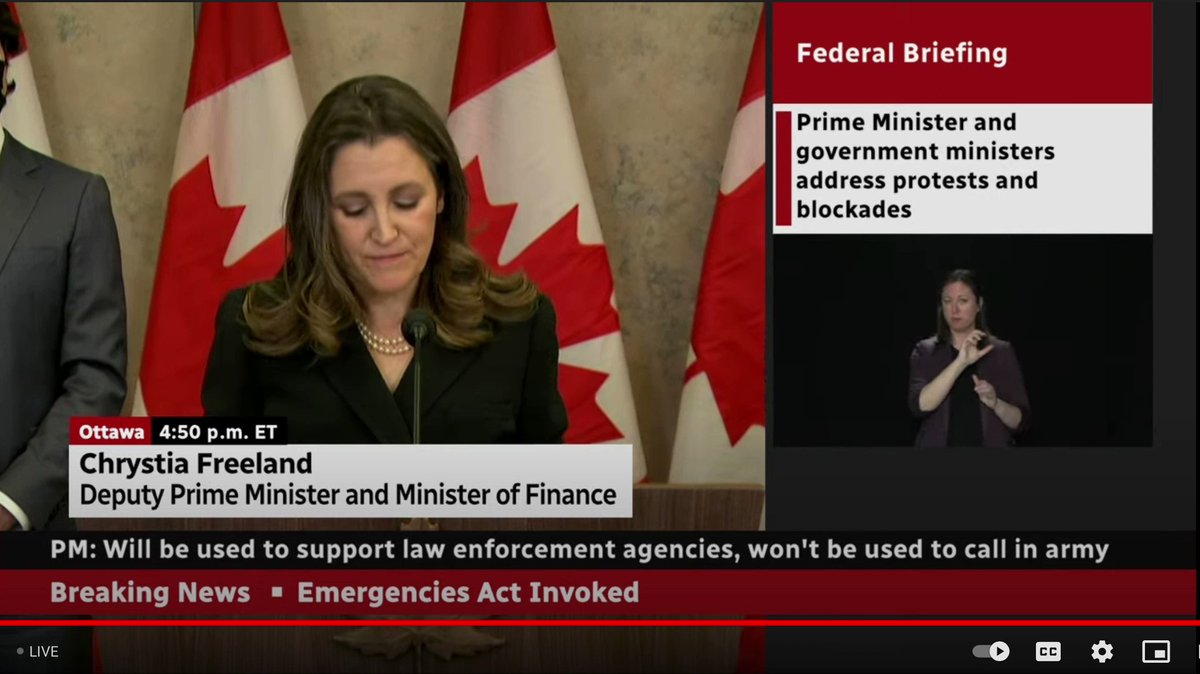 As we detailed earlier, Canadian Broadcasting Corporation has learned that Prime Minister Trudeau “will inform the provinces he will invoke the Emergencies Act to give the government extra powers to deal with the protests across the country. But in a meeting with the Liberal caucus, the PM said there were no plans to deploy the military.”

The move follows a meeting Sunday of the federal cabinet and its Incident Response Group (IRG).
Trudeau tweeted late Sunday that the IRG discussed “further actions the government can take to help end the blockades and occupations.”
Earlier that day, Emergency Preparedness Minister Bill Blair told CBC’s Rosemary Barton Live that the federal government has discussed invoking special emergency powers to deal with ongoing protests in Ottawa.
Blair described the attitude around invoking the Emergencies Act as “appropriate caution” rather than “reticence.”

As CBC concludes,the law gives the federal government carte blanche to cope with a crisis, including the ability to enact emergency powers that allow it to prohibit travel within a specified area or remove personal property, while imposing fines or jail time on people contravening new orders.
This is basically the ability to unleash ‘selective’ martial law on Canadians.
This comes after reports on Sunday, Canadian officials cleared the roadway and arrested “Freedom Convoy” demonstrators who held the line and blocked the busiest U.S.-Canada border crossing for nearly a week. Canadian officials confirmed the bridge reopened earlier Monday morning as Prime Minister Justin Trudeau is expected to invoke emergency powers to squash protesters around the country.
Traffic cameras on Ambassador Bridge, which connects Windsor and Canadian automotive plants with Detroit, show increased traffic flows around 0930 ET in both directions, into the US, and into Canada.
“Today, our national economic crisis at the Ambassador Bridge came to an end,” declared the mayor of Windsor, Drew Dilkens.
While the bridge’s reopening has been called a success by the government, demonstrators against medical tyranny disrupted hundreds of millions of trade between both countries. Bloomberg reports the price of the six-day shutdown cost a whopping $13.5 million an hour in traded goods and forced carmakers to shutter or limit production at plants in Ontario and Detroit.
About 500 miles northeast of Windsor, CBS News reports protesters in Ottawa, Canada’s capital, continue to “paralyze downtown.” The occupation of Ottawa has incited a movement across the country of freedom-loving people creating congestion across highways, metro areas, and border crossings — all because they’re fed up with Trudeau’s vaccine mandates and restrictions.
The government is struggling to quell the assembly of freedom-loving people from across the country as Trudeau’s government plays Whac-A-Mole” to squash protesters where every they show up.
The latest is in Surrey, British Columbia, where protesters have shuttered a border crossing. Freedom never sleeps as a stretch of Highway 15 remains shut down, preventing traffic from entering the US. Data from geolocation technology company TomTom shows part of the highway is closed. 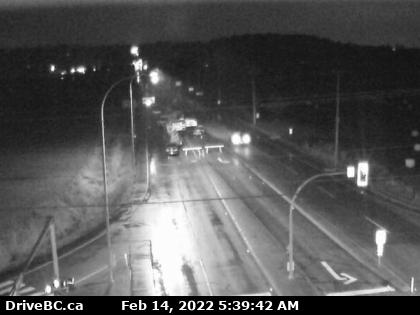 @DriveBC
REMINDER - #BCHwy15 The highway is closed in both directions between 1 Ave and 8 Ave in #SurreyBC due to a public demonstration. Expect major delays due to congestion.  For more info: https://drivebc.ca/mobile/pub/eve


Twitter is full of pictures and videos from over the weekend of people gathering on and around the highway to voice their opinion against the government’s dystopic vaccine mandates and restrictions.
Even as Ambassador Bridge reopens, protesters continue blockade movements across the country at critical chokepoints that could unleash economic pain for the Canadian economy, something the Bank of Canada has called “very distressing.”