OUT OF MIND » TRUTH IN CONSPIRACY THEORIES? » #EPSTEINDIDN'TKILLHIMSELF » Pedophile Prince Andrews Buys his way Out of Justice – Settles Sex Abuse Case before Trial 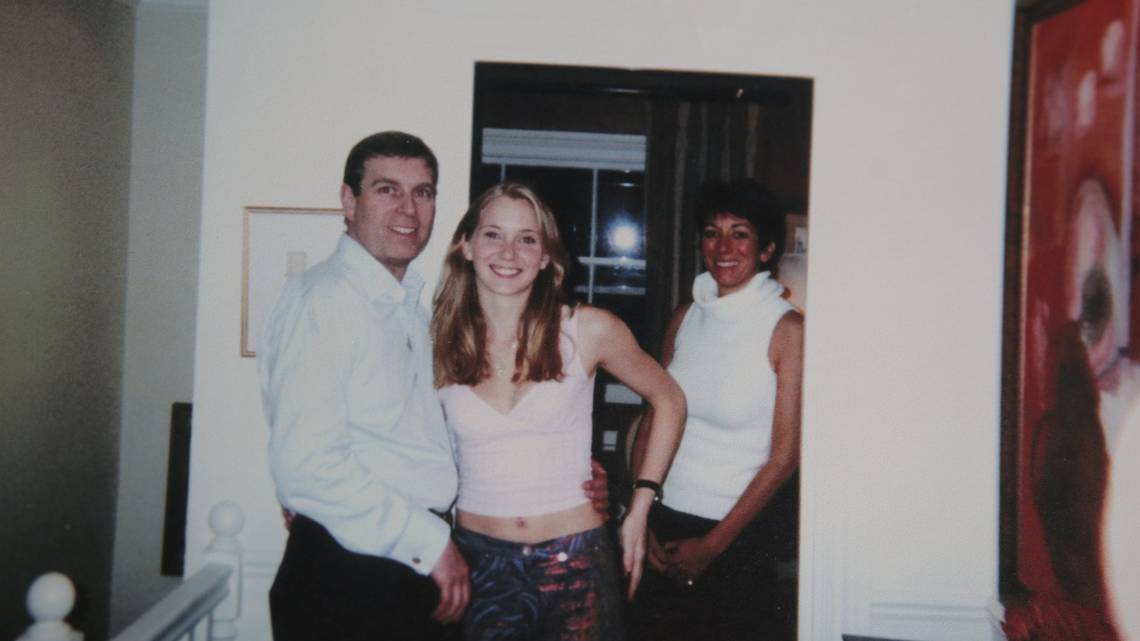 The infamous photo of Prince Andrew and Ghislaine Maxwell with teenage Virginia Giuffre. Prince Andrew had previously stated he had no memory of this photo. Now he will not have to answer any questions in a court of law because he allegedly settled the case out of court for an unknown sum of money.

BY BEN WIEDER AND JULIE K. BROWN
Miami Herald
Excerpts:
It was the bombshell lawsuit that wasn’t.
Six months and six days after Virginia Giuffre filed suit against British royal Prince Andrew, alleging that he had sexually assaulted her while she was a minor, the lawsuit has been settled out of court, for an undisclosed sum.
Andrew will make a “substantial donation” to Giuffre’s victims’ rights charity and appears to admit no wrongdoing. He does express regret for his association with former pal Jeffrey Epstein, the disgraced financier in whose homes Giuffre alleged she had been sexually abused.
No mention of Epstein’s former girlfriend and co-conspirator Ghislaine Maxwell, whose London home was the site of one of the alleged incidents of abuse.
The lawsuit’s speedy conclusion leaves more questions than it answers. Andrew had consistently denied Giuffre’s accusations, most notably in a disastrous BBC interview in which he claimed, among other things, that a medical condition rendered him unable to sweat. Giuffre had intended to force Andrew to turn over evidence supporting his medical condition, but, alas, it will remain a mystery.
And what of the provenance of the famous photograph featuring Giuffre, Maxwell and Andrew? The British prince said he had no recollection of the photo and left open the possibility that the photograph was a fake.
No resolution on that question, either.
Read the full article at the Miami Herald.

by JOSH RUSSELL
Courthouse News Service
Excerpts:
A month after his ouster from royal life, Britain’s Prince Andrew agreed Tuesday to settle a New York civil lawsuit over allegations that he sexually abused a teenage girl trafficked by the late financier Jeffrey Epstein.
David Boies, the high-profile attorney representing Prince Andrew’s accuser Virginia Giuffre, wrote in a letter this morning to U.S. District Lewis Kaplan “that the parties reached a settlement in principle.”
The sum of the out-of-court settlement will be not disclosed, Boies wrote.
Giuffre sued the Duke of York in August 2021, claiming that he abused her on multiple occasions in 2001 when she was a 17-year-old victim of the sex trafficking ring Epstein ran for decades with the help of his former girlfriend Ghislaine Maxwell.
Epstein famously died in jail ahead of a federal trial on related charges, but Maxwell was convicted late last month.
Giuffre asserted that she met Andrew while she traveled frequently with Epstein between 2000 and 2002, when her lawyers maintain she was “on call for Epstein for sexual purposes” and was “lent out to other powerful men,” including Prince Andrew.
Her complaint included a widely circulated photograph of Giuffre as a teenager, posing with Andrew at Maxwell’s London home, that she says was taken prior to nonconsensual sex with the prince, who has arm around her waist in the photograph.
The 61-year-old Duke of York himself has strenuously denied Giuffre’s allegations.
While the letter announcing the settlement purports to be written “jointly,” it was signed only by Giuffre’s attorney.
The embattled 61-year-old royal, whose full name is Andrew Albert Christian Edward, was formally stripped of his honorary military roles and what are known as his royal patronages in the wake of the Judge Kaplan’s decision earlier in January to advance Giuffre’s case to. This came after Andrew had already stepped back from royal duties.
In a statement attached to Boies’ letter, representatives for Prince Andrew said he “pledges to demonstrate his regret for his association with Epstein by supporting the fight against the evils of sex trafficking, and by supporting its victims.”
The attached statement further asserts that Prince Andrew “never intended to malign Ms. Giuffre’s character, and he accepts that she has suffered both as an established victim of abuse and as a result of unfair public attacks”
“Prince Andrew intends to make a substantial donation to Ms. Giuffre’s charity in support of victims’ rights,” the letter states. “It is known that Jeffrey Epstein trafficked countless young girls over many years. Prince Andrew regrets his association with Epstein, and commends the bravery of Ms. Giuffre and other survivors in standing up for themselves and others.”
Prince Andrew, who is now living in the Royal Lodge at Windsor Great Park in Berkshire, England, told the BBC in 2019 that he had no recollection of meeting Giuffre. Though he later said he would cooperate with U.S. authorities investigating Epstein, Geoffrey Berman, the former U.S. attorney for the Southern District of New York, said Prince Andrew had provided “zero cooperation.”
Giuffre says Epstein recruited her into his sex-trafficking operation when she was working at the Mar-A-Lago Club in Palm Beach, Florida.
Her lawsuit said she still suffers significant emotional and psychological distress and harm.
She says that Prince Andrew’s sexual abuse occurred in Epstein’s New York mansion and on Epstein’s private island in the U.S. Virgin Islands, as well as in London at the home of Maxwell, who will be sentenced in June after being found guilty in December 2021 on five federal charges in connection with recruiting underage girls for abuse by Epstein.
Giuffre has been entangled for years in a separate civil defamation battle in the Southern District of New York with Alan Dershowitz, the Harvard law professor emeritus. She settled a defamation suit against Maxwell in 2017 and did not testify at Maxwell’s recent criminal trial in the district.
Last month, Maxwell’s attorneys filed a motion for a retrial of her criminal sex trafficking case because a juror in her monthlong trial told media outlets that he had not disclosed his personal history of sexual abuse during the jury selection process.
Read the full article at Courthouse News Service.
Comment on this article at HealthImpactNews.com.

OUT OF MIND » TRUTH IN CONSPIRACY THEORIES? » #EPSTEINDIDN'TKILLHIMSELF » Pedophile Prince Andrews Buys his way Out of Justice – Settles Sex Abuse Case before Trial