Source: Jordan Conradson
Multiple American trucker convoys are gearing up for a massive protest in Washington DC in opposition to tyrannical COVID mandates.

After announcing that the protest would not rely on big tech companies for fundraising, The People’s Convoy reports over $214,447 in donations as of February 21.
According to a Rasmussen poll published last week, most Americans say that they would support a trucker protest in the US. 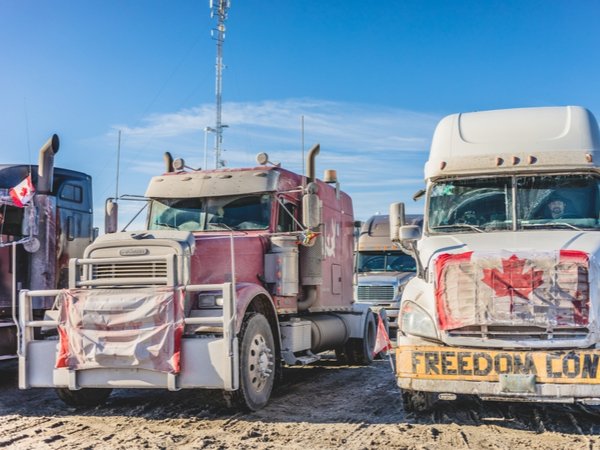 The group released a statement on Monday unveiling their convoy route with dates.
The convoy will depart from California for Washington DC at 10:00 am this Wednesday.

FOR IMMEDIATE RELEASE
For media inquiries contact:
Email: thepeoplesconvoy@protonmail.com
American Truckers are launching The People’s Convoy, a peaceful and unified transcontinental movement, on February 23 from Adelanto Stadium in Southern California
ADELANTO, Calif., (Feb. 20, 2022) American truckers are launching The People’s Convoy, a peaceful and unified transcontinental movement, on Wednesday, February 23, 2022, from the Adelanto Stadium in Southern California. Starting at 10:00 a.m., hundreds of truckers will hear words of encouragement and blessings from a group of speakers including FLCCC President Dr. Pierre Kory and Godspeak Church Pastor Rob McCoy. The truckers and blue-collar workers of the United States will be joined by freedom-loving supporters from all walks of life – frontline doctors, lawyers, first- responders, former military servicemen and women, students, retirees, mothers, fathers and children – on this peaceful and law-abiding transcontinental journey toward the east coast. The truckers encourage one and all to come out to the stadium in the heart of Adelanto, California to wish them well, see them off and join in the journey.
This convoy is about freedom and unity: the truckers are riding unified across party and state lines and with people of all colors and creeds – Christians, Muslims, Jews, Sikhs, Mormons, Agnostics, Blacks, Hispanics, Asians, Native Americans, Republican, Democrats. All individuals are welcome to participate by either attending the launch gathering – at 10:00 a.m. on Wednesday February 23, at Adelanto Stadium – or by getting in their own vehicles and following the big rigs from Adelanto toward the east coast!
The message of The People’s Convoy is simple. The last 23 months of the COVID-19 pandemic have been a rough road for all Americans to travel: spiritually, emotionally, physically, and – not least – financially. With the advent of the vaccine and workable therapeutic agents, along with the hard work of so many sectors that contributed to declining COVID-19 cases and severity of illness, it is now time to re-open the country. The average American worker needs to be able to end-run the economic hardships of the last two years, and get back to the business of making bread – so they can pay their rents and mortgages and help jumpstart this economy. To that end, it’s time for elected officials to work with the blue collar and white-collar workers of America and restore accountability and liberty – by lifting all mandates and ending the state of emergency – as COVID is well-in-hand now, and Americans need to get back to work in a free and unrestricted manner.

WE DEMAND THE DECLARATION OF NATIONAL EMERGENCY CONCERNING THE COVID-19 PANDEMIC BE LIFTED IMMEDIATELY AND OUR CHERISHED CONSTITUTION REIGN SUPREME.
WE ARE THE PEOPLE OF THE UNITED STATES OF AMERICA AND WE STAND TOGETHER UNDER THE BANNER OF FREEDOM – FREEDOM IS THE ONE THING THAT UNITES US ALL.  LIBERTY FLOWS THROUGH ALL OF OUR VEINS.

The Gateway Pundit has reported on multiple convoys across America that are planning to participate in the historic fight for our freedoms. » US Trucker Convoy Swells As It Moves Across Country To DC
» In Second Weekend Trucker Convoy Spreads to Other Canadian Cities as Ottawa Declares State of Emergency
» Where’s America’s Trucker Protest Convoy?
» Trucker Freedom Convoy Now up Against Both Canadian and U.S. Government as They Try to Seize Funds on New Platform
» Facebook Bans American Trucker ‘Convoy to DC 2022’ Page With 139,000 Followers