A large body of research has shown that plant-based diets can have many health benefits – including lowering the risk of chronic diseases, such as type 2 diabetes and heart disease. Two large studies – EPIC-Oxford and the Adventist Health Study-2 – have also suggested vegetarian or pescatarian diets (where the only meat a person eats is fish or seafood) may be linked to a slightly lower overall cancer risk.
Limited research has shown whether these diets could lower risk of developing specific types of cancer. This is what our recent study aimed to uncover. We found that eating less meat lower a person’s risk of developing cancer – even the most common types of cancer.
We conducted a large-scale analysis of diet and cancer risk using data from the UK Biobank study (a database of detailed genetic and health information from nearly 500,000 British people). When participants were recruited between 2006 and 2010, they completed questionnaires about their diet – including how often they ate foods such as meat and fish. We then tracked participants for 11 years using their medical records to understand how their health had changed during this time.
Participants were then categorised into four groups depending on their diet. Around 53% were regular meat-eaters (meaning they ate meat more than five times a week). A further 44% of participants were low meat-eaters (eating meat five or less times a week). Just over 2% were pescatarians, while just under 2% of participants were classified as vegetarians. We included vegans with the vegetarian group as there weren’t enough to study them separately.
Our analyses were also adjusted to ensure other factors that might increase risk of cancer – such as age, sex, smoking, alcohol consumption and sociodemographic status – were taken into account.

Compared with regular meat-eaters, we found the risk of developing any type of cancer was 2% lower for low meat-eaters, 10% lower in pescatarians and 14% lower in vegetarians.

We also wanted to know how diet affected risk of developing the three most common types of cancer seen in the UK.

We also found that women who ate a vegetarian diet had an 18% lower risk of postmenopausal breast cancer in comparison to regular meat-eaters. However, this association was largely due to the lower average body weight seen in vegetarian women. Previous studies have shown that being overweight or obese after menopause increases risk of breast cancer. No significant associations were observed between postmenopausal breast cancer risk among pescatarians and low meat-eaters. 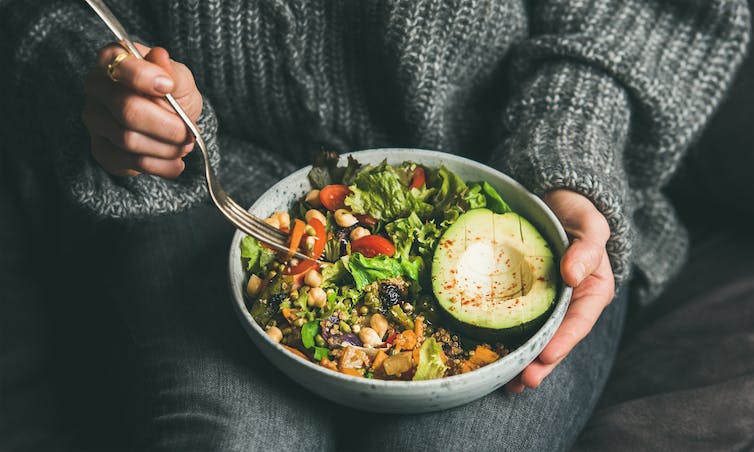 Pescatarians and vegetarians also had a lower risk of prostate cancer (20% and 31% less respectively) in comparison to regular meat-eaters. But it’s not clear whether this is because of diet, or if it’s due to other factors – such as whether or not a person sought cancer screening.
As this was an observational study (meaning we only observed changes to a participant’s health without asking them to make changes to their diet), this means we can’t know for sure if the links we’ve seen are directly caused by diet, or if they’re due to other factors. Although we adjusted the results carefully to take into account other important causes of cancer, such as smoking and alcohol consumption, it’s still possible other factors may still have influenced the results we observed.

Another limitation of our study is that most of the participants (around 94%) were white. This means we don’t know whether the same link will be seen in other ethnic groups. It will also be important for future studies to look at a more diverse population, as well as larger numbers of vegetarians, pescatarians and vegans to explore whether this link between lower cancer risk and these types of diets is as strong as we observed.
It’s important to note that simply eliminating meat doesn’t necessarily make your diet healthier. For example, some people who follow a vegetarian or pescatarian diet may still eat low amounts of fruits and vegetables and high amounts of refined and processed foods, which might lead to poor health.
Most evidence showing an association between lower cancer risk and vegetarian or pescatarian diets also seems to suggest that greater consumption of vegetables, fruits and whole grains may explain this lower risk. These groups also don’t consume red and processed meat, which is linked with higher colorectal cancer risk. But more evidence will be needed to fully explore the reasons for the results we observed.
The links between red and processed meat and cancer risk are well known – which is why it’s widely recommended people aim to limit the amount of these foods they consume as part of their diet. It’s also recommended that people consume a diet rich in whole grains, vegetables, fruits and beans as well as maintain a healthy body weight in order to reduce their risk of cancer.