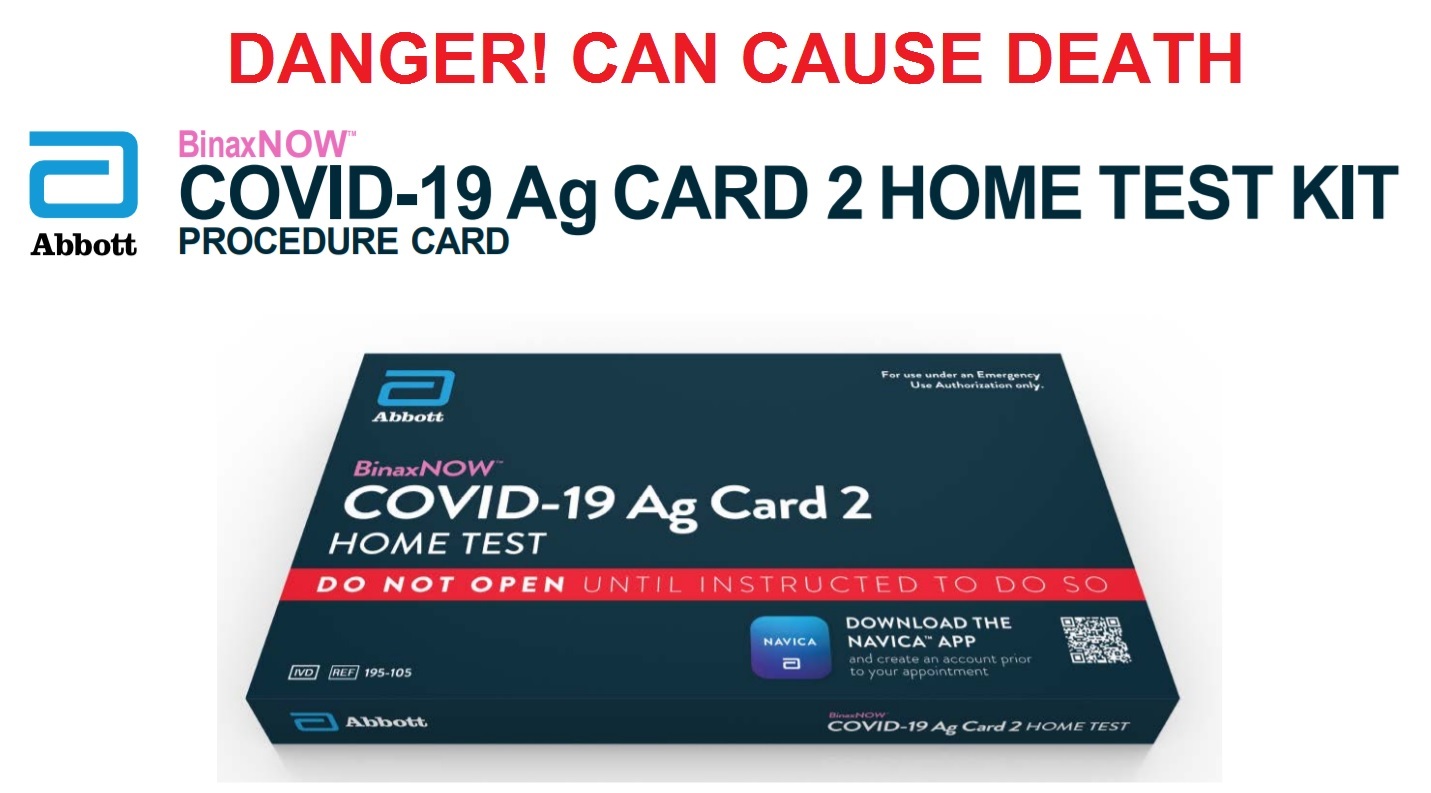 by Brian Shilhavy
Editor, Health Impact News
Last December we published a video report from Greg Reese of Infowars.com that a lethal drug that is included in Abbott’s BinaxNOW COVID-19 Home Test Kit has a history of killing people even in small doses. See:

These test kits are NOT FDA approved, but were fast-tracked through emergency use authorization as the Biden Administration invoked the Defense Protection Act to spend $3 BILLION to purchase and make available a half billion of these COVID home testing kits for all Americans.
With many of these kits now having been delivered to people’s homes, poison control centers around the U.S. have sounded the alarm over the deadly sodium azide chemical in these home test kits, as more than 200 reports of poisoning have now been reported from exposure to this chemical.

Nearly 200 million at-home COVID-19 tests were recently mailed in the U.S.
But a component inside some of those kits is raising concerns.
“Some of the kits actually have sodium azide in them. Sodium azide is a chemical that can be potentially poisonous,” said Dr. Kelly Johnson-Arbor, National Capital Poison Center.
Dr. Kelly Johnson-Arbor is a Medical Toxicologist at the National Capital Poison Center in Washington D.C.
She says accidental exposure or ingestion of this fluid is happening in both children and adults.
“People might mistake them for eye drops. Children might drop it onto their skin. Adults will sometimes mistakenly put them into their eyes,” said Dr. Johnson-Arbor.
A dozen accidental reports of exposure have been made in the Keystone State since kits became available outside of medical offices and pharmacies. (Full article.)

Here is a report from Ohio:

Be aware: That COVID-19 test kit in your home could contain a toxic substance that may be harmful to your children and you.
The substance is sodium azide, and Cincinnati Children’s Hospital Medical Center’s Drug and Poison Information Center has seen a surge in calls about exposures to the chemical since more people started self-testing for COVID-19 at home.
Fifty million U.S. households have received some version of the test kits, although it’s not clear how many contain sodium azide. The government has sent 200 million of the kits, with about 85% of initial orders filled, officials said at a White House briefing last week.
Sodium azide, often used as a preservative, is a liquid reagent in several of the COVID-19 test kits, she said. Ingesting it can cause low blood pressure, which can result in dizziness, headaches or palpitations. Exposure to it can also cause skin, eye or nostril irritation.
The Cincinnati Children’s based Drug and Poison Information Center has logged 38 cases of sodium azide exposure, with cases peaking in January, around the time that the omicron variant triggered a high number of COVID-19 cases, Goertemoeller said. Adults exposed generally have experienced mild skin irritation, which can get worse if the area isn’t washed thoroughly, she said.
The Cincinnati Children’s Drug and Poison Information Center covers half of Ohio’s population, covering a swath of calls in Southwest Ohio and those in Northeast Ohio, including Akron. Nationwide Children’s Central Ohio Poison Center handles the other half of the state’s population.
“Mostly, I’ve been very worried about our young children,” Goertemoeller said.
The “good news” is that the cases reported to the Cincinnati Children’s center mostly have been minor and resolved at home, Goertemoeller said. She added that the amount of sodium azide in COVID-19 rapid tests is small.
Large amounts of exposure to sodium azide can cause severe health threats, leading to convulsions, loss of consciousness, lung injury, respiratory failure leading to death, the Centers of Disease Control and Prevention notes. The chemical is best known as one found in airbags.
Several poison centers throughout the United States have reported sodium azide exposures from the COVID-19 test kits. Goertemoeller estimated there have been 200-plus reported cases from the 55 poison centers nationwide. (Full article.)

Once again, those of us “conspiracy theorists” in the alternative media were reporting the dangers of these home test kits months before the pharma-funded corporate media sources were.
I am quite sure new millionaires were made and new businesses were started simply because the U.S. Government gave them $3 BILLION to make these test kits.
These Wall Street Billionaires and Bankers do not care one bit about your health or even your life, and they buy out the politicians to make sure their products are purchased, not in a free market, but in what has basically become socialized healthcare in the U.S. now.
Almost all of these COVID products are pure junk, either having no health benefit to the consumer, or worse, harming and killing the consumer, from masks, to COVID test kits, to ventilators, to vaccines – NONE of these products would ever survive in a free market where people had to pay for them, because it would become well known that these products are junk, and everyone would stop buying them.
But instead, the Government buys them, and either gives them away free, or mandates their use as a requirement to participate in society.
And if something goes wrong with one of these fast-tracked products and you are harmed, or killed, you cannot sue the manufacturer. You have to try and sue the U.S. Government, and good luck with that.
Welcome to the new Socialist Republic of the United States.
Comment on this article at HealthImpactNews.com.

» Doctors Around the World Issue Dire WARNING: DO NOT GET THE COVID VACCINE!!
» Most Vaccinated Country on Earth Closes Schools and Sports as COVID Cases Surge — 35% of New Cases Are Fully Vaccinated Residents
» UPDATE: 71 out of 75 Districts in Uttar Pradesh, India – Its Most Populated State – Reported No Covid-19 Cases in 24 Hours After Implementing Ivermectin Protocol
» Mrna COVID Vaccines Dramatically Increase Endothelial Inflammatory Markers and ACS Risk as Measured by the PULS Cardiac Test: a Warning
» The ‘Centers for Disease Control’ is No Such Thing