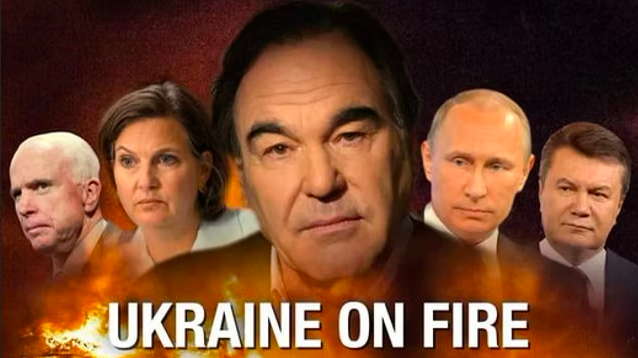 A few days ago, YouTube removed the 2016 documentary, ‘Ukraine on Fire’, because it had suddenly violated their Terms of Service against “violent or graphic content”, despite being posted on the platform for over four years.
Executive Produced by Oliver Stone and directed by Igor Lopatonok, this important documentary tells the story that Westerners never got to see on the Mainstream Media, taking a deep dive into how the peaceful Kyiv protests in February 2014 mysteriously became violent and deadly, to become known as the “2014 Revolution of Dignity”.
Academy-Award-winner Stone was unable to find a Western distributor. His interviews, first with former President Viktor Yanukovych then Vladimir Putin and others start at the 25:30 mark
The post-Soviet 1990s saw the rise of corrupt Ukrainian oligarchs who absconded with state assets, leading to “Color Revolutions” in 2004 and 2014, culminating in the US-backed installation of Ukraine’s current regime.
Looking at the past 18 years, I see how my beliefs, for example about pro-Western former Ukrainian president Viktor Yushchenko were completely manipulated by the US State Department – the former employer of his Chicago-born wife.
Some may recall that Yushchenko survived an assassination attempt from dioxin poisoning in 2004 and he had thus gained my sympathy – until I learned here that he’d elevated WWII Ukrainian Nazi leader, Stepan Bandera to the status of National Hero in 2010, a move which was internationally condemned and overturned by a Donetsk court a year later.
‘Ukraine on Fire’ is the kind of rare gem that’s becoming harder to find. If you’re interested in continuing your education about this topic, there is also the important 2019 follow-up film by the same team, ‘Revealing Ukraine’.

Ukraine. Across its eastern border is Russia and to its west-Europe. For centuries, it has been at the center of a tug-of-war between powers seeking to control its rich lands and access to the Black Sea. 2014's Maidan Massacre triggered a bloody uprising that ousted president Viktor Yanukovych and painted Russia as the perpetrator by Western media.
But was it? "Ukraine on Fire" by Igor Lopatonok provides a historical perspective for the deep divisions in the region which lead to the 2004 Orange Revolution, 2014 uprisings, and the violent overthrow of democratically elected Yanukovych. Covered by Western media as a people's revolution, it was in fact a coup d'état scripted and staged by nationalist groups and the U.S. State Department.
Investigative journalist Robert Parry reveals how U.S.-funded political NGOs and media companies have emerged since the 80s replacing the CIA in promoting America's geopolitical agenda abroad.